A man with a briefcase.
Photographer: James MacDonald/Bloomberg

Sidley Austin LLP had more work defending companies against activist investors than any other law firm last year, according to new Bloomberg data.

“We have enough recognized expertise that we get a lot of companies calling us out of the blue,” Zaba said. 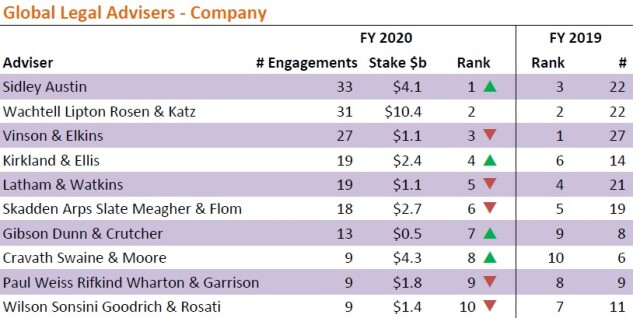 Wachtell, Lipton, Rosen & Katz was close to edging out Sidley with the 31 engagements it landed defending companies in 2020, putting it in the No. 2 spot, according to Bloomberg data.

Wachtell also advised HP in its fight with Xerox and assisted Public Storage in a board representation campaign brought by activist fund Elliott Management Corp. in 2020, according to Bloomberg. Elliott is seeking to add six directors to Public Storage’s board, Bloomberg reported in December.

“The pace of change and pressure on public companies has never been greater, and clients rely on us,” said Sabastian Niles, a Wachtell partner who focuses on shareholder activism.

Vinson & Elkins LLP, Kirkland & Ellis LLP, and Latham & Watkins LLP followed Wachtell in the law firm rankings, rounding out the top five law firms with the most engagements helping companies against activist shareholders, according to Bloomberg data. Vinson, which led the rankings in 2019, had 27 engagements in 2020. Kirkland and Latham both had 19 last year.

The value of activist stakes for Olshan that year was $14.8 billion, which no other law firm could beat.

But work was also down for the Olshan last year. The law firm had 20 fewer engagements in 2020 after picking up 139 matters in 2019, Bloomberg data show.

“There’s a little dip in 2020, but we fully expect 2021 to be as busy as ever,” said Olshan partner Andrew Freedman, a co-chairman of the firm’s shareholder activism group.