The SEC is down dozens of officials that would scrutinize companies’ climate disclosures and other corporate reporting that is expected to expand under Chairman Gary Gensler's regulatory agenda.
Zach Gibson/Bloomberg via Getty Images

The SEC is down dozens of officials to scrutinize and regulate companies’ climate disclosures and other corporate reporting, as they grapple with a years-old staff shortage and more work under Chair Gary Gensler.

A Bloomberg Law review of Securities and Exchange Commission documents shows the agency unit in charge of corporate reporting has lost nearly a fourth of its staff since 2017 and, with replacements, its workforce has still been unable to catch up in that timespan.

The staff deficit in the Division of Corporation Finance has led Gensler to ask Congress for reinforcements. But the division still must contend with additional corporate filings to review from initial public offerings and special purpose acquisition companies, and upcoming rules that would require enhanced company disclosures on greenhouse gas emissions, cyber breaches and workforce metrics, among other things. 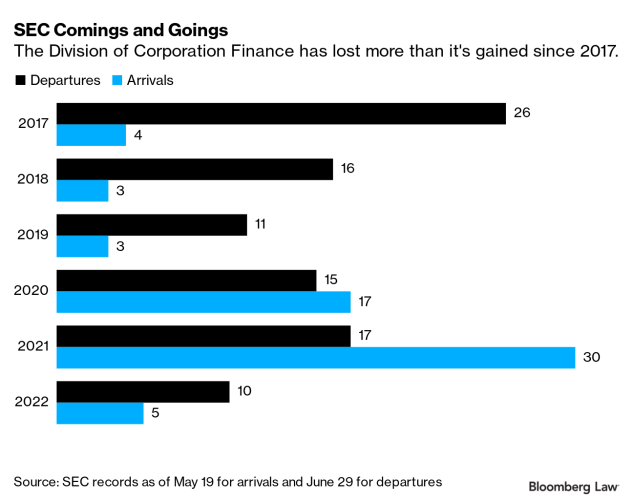 Bloomberg Law, using material obtained through a public records request, looked at how many employees have come in and out of the Division of Corporation Finance since January 2017. The arrival data accounts for staff newcomers as of May 19, while the departure information ends at June 29. The details were obtained through Freedom of Information Act requests.

The division, often called Corp Fin, has lost 95 staffers since 2017, a majority of whom had more than ten years’ experience. It added 62 workers in that time, leaving a 33-person shortfall.

The group’s 398 officials under Director Renee Jones make it the SEC’s third-biggest division after its Divisions of Enforcement and Examinations. The agency has a total of about 4,500 employees.

The division is working on or has finished more than a dozen rules this year, according to its regulatory agenda. The list includes rules that would require companies to make more disclosures about the characteristics of their employees and report cybersecurity incidents within four business days of discovering a problem.

That rulemaking work is on top of the division’s reviews of a growing number of corporate filings. The number of new companies with filings nearly quadrupled from 510 in 2016 to 1,960 in 2021, Gensler told lawmakers earlier this year.

But the item that’s gained the most attention on the division’s agenda are rules proposed in March that would require companies to report the emissions from their direct operations, power usage and supply chains, known respectively as Scopes 1, 2 and 3. The proposed Scope 3 disclosures are of particular concern to some companies, which have said the data is hard to calculate and report, increasing their compliance costs.

Division staffers are sifting through thousands of letters from the public over the proposal. The SEC is seeking funding in its fiscal 2023 budget request for seven more lawyers to assist with making rules on environmental, social and governance issues and other matters.

Gensler has said in public appearances that work to finalize the climate rules will take some time. He has declined to give a timeline, though the SEC is working to adopt the regulations by year’s end.

“We’ll look at things as a five-member commission when the staff can adequately look through it and make recommendations,” Gensler said at a Women Corporate Directors Global Institute discussion in September.

The climate rules’ implementation would bring extra work to the Division of Corporation Finance, though there’s disagreement over the amount.

Some Division of Corporation Finance observers said the rules would bring even greater strain to the group, while Coates said the workload “wouldn’t move the needle enough” to consider scuttling the climate regulations.

The rules would require a new climate-related disclosure section in companies’ annual 10-K reports, among other changes. The size of the disclosures would vary based on the company. Only large companies, for example, would need to report their Scope 3 emissions, if material to their businesses.

The division would need to devote about 18% to 39% of its staff to administer the rules, David Burton, a senior fellow in economic policy at right-leaning think tank Heritage Foundation, said in a letter to the SEC about its climate proposal. That would translate into about 72 to 155 people.

“It’s not rocket science,” Burton said in an interview. “I don’t think they could do a competent job.”

Questions also remain over whether the division has the expertise to properly scrutinize corporate climate disclosures, or if it needs special environmental knowledge, if the rules are finalized.

Some Republicans have said the SEC is unable to properly review the disclosures, a claim Democrats have disputed. The agency lacks the knowledge to adequately assess reporting about climate models and corporate progress toward meeting their stated environmental goals, Republican SEC Commissioner Hester Peirce said earlier this year.

The Division of Corporation Finance would review climate reporting and can pose questions to companies and suggest improvements to their disclosures—as it already does for cryptocurrencies, pharmaceuticals and several other topics. It doesn’t audit data, investigate potential rule violations or bring enforcement actions, but it does make referrals to the SEC’s Enforcement Division, which can file cases.

The Division of Corporation Finance would need help understanding the new climate data it receives, said Coy Garrison, a former counsel to Peirce and the division.

“It’s going be a challenge for those staffers to efficiently and consistently review the new disclosures based on the new climate rules,” said Garrison, now a Steptoe & Johnson LLP partner.

It’s unclear whether the Division of Corporation Finance has any staffers who would consider themselves to be environmental experts. But the division has some familiarity with climate disclosures already.

The agency in 2010 released guidance that reminded companies to make disclosures about climate change, if material to their businesses. The Division of Corporation Finance has since sent several letters to companies questioning their compliance with the guidance.

The group also sent companies several letters asking why their 10-Ks lacked ESG disclosures made in their sustainability reports.

“The type of comments that we’re seeing from the Corp Fin staff these days has a very different tone to it,” said Barros, a former chief corporate governance counsel in the Division of Corporation Finance.

The SEC is seeking 65 new staffers for its Division of Corporation Finance. Most of them would help “assist with review of the significant increase of IPO and SPAC filings, provide more robust review of registration statements, and provide prompt and thorough responses to registrants,” according to its fiscal 2023 budget request to Congress.

The budget, which is pending, could be Gensler’s last chance to get additional help for the Division of Corporation Finance, if Republicans take control of at least one chamber of Congress and limit the SEC’s funding to pursue ESG issues.

Rep. Patrick McHenry of North Carolina and other top Republicans on the House Financial Services Committee have challenged the SEC’s authority to require climate disclosures from companies, most recently in a Sept. 20 letter to Gensler. The letter cites the Supreme Court’s recent West Virginia v. EPA decision, which said agencies must have clear permission from Congress to create regulations that have significant economic or political effects.

In the face of mounting GOP opposition to the SEC’s agenda, the division’s staffers still will find a way to do what they need to do, even if reinforcements don’t come, Coates said.

“They just have to work harder or work later,” he said.