The SEC is months away from finalizing expansive new climate disclosure requirements as the agency juggles investor demands for more transparency, tech glitches and a tough Republican legal threat.

The Securities and Exchange Commission will miss a self-imposed October deadline for final rules as it continues to sift through thousands of public comments and factors in a June Supreme Court ruling that endangers the agency’s normally broad authority to regulate Wall Street.

The commission was forced to reopen its comment file earlier this month after a technical glitch may have prevented some feedback on the March climate proposal and other rules from reaching the agency. That has only added to the challenges in completing requirements for companies to disclose their carbon footprint, including greenhouse gas emissions from their supply chains.

“I can’t see how that process leads to the commission producing a final rule before the end of the year,” Evan Williams, senior director at the the US Chamber of Commerce’s Center for Capital Markets Competitiveness, said last week.

Glitches aside, the SEC also must factor in the Supreme Court’s decision in West Virginia v. Environmental Protection Agency, which SEC Chair Gary Gensler said this month was “significant and meaningful.” Agencies need clear permission from Congress to create regulations that have major economic or political effects, the court ruled in June, three months after the SEC released its proposal.

For the first time, the agency plans to require companies to report climate change risks to their operations when they file registration statements, annual reports, and other filings.

The 490-page proposal called for companies to adopt some climate disclosure requirements as early as 2023 and provide detail on the financial toll that a changing climate costs their business. Those adoption milestones are also likely to be delayed, giving companies more time to prepare for any rules.

Gensler has declined to give a timeline for finishing the climate regulations in recent public appearances, repeatedly pointing to thousands of comments that still need to be reviewed.

The SEC had planned to complete the rules by October, according to a public agenda released earlier this year. With a new Nov. 1 deadline for public comments, that’s not happening.

“The volume of comments is the primary factor in the amount of time it will take to finalize the rule,” said a person with actual knowledge of the SEC’s climate rule writing process.

Agency officials in private conversations have given no indication they’ll finish the rules this year, according to several people in contact with the agency.

Williams, the chamber official, doesn’t expect final rules to be released until the first quarter of 2023. It’s not uncommon for the SEC to need a year or more to finalize major projects, but the commission should be candid with corporate leaders about the shifting timeline, he said.

The March proposal set up a major clash with companies and Republicans who view the effort as beyond the agency’s jurisdiction.

West Virginia could be first in line to take on the SEC.

Patrick Morrisey, the state’s attorney general, threatened to sue the SEC over the rules before they were even proposed. Mandatory disclosures on climate change and other environmental, social and governance issues would violate companies’ First Amendment rights, he told the agency in a 2021 letter. 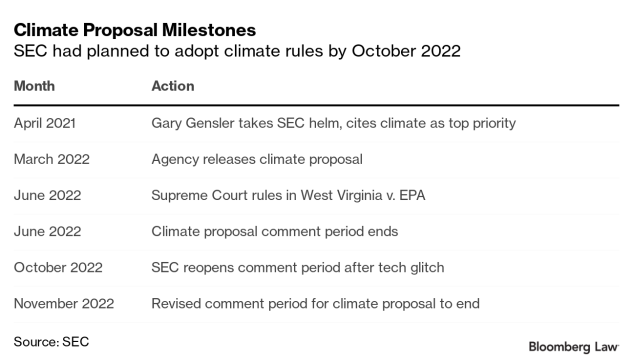 Gensler has long wrestled with provisions in the proposal that would require large companies to disclose emissions from their supply chains and other indirect sources. He has received significant corporate pushback over reporting the releases, known as Scope 3 emissions. Companies have said the information is difficult to compute and disclose, inflating compliance costs.

The chair and his fellow Democratic commissioners fought for months before the proposal’s release over whether to include Scope 3 reporting requirements. Gensler feared the provisions would bolster court cases to scrap the climate disclosure rules, but Commissioners Caroline Crenshaw and Allison Lee convinced him to proceed.

Lee is no longer on the commission. Her successor, Democrat Jaime Lizarraga, has said investors need carbon footprint disclosures, particularly information on Scope 1 and 2 emissions from companies’ direct operations and power usage. He has yet to speak specifically about Scope 3 disclosures.

West Virginia v. EPA makes it very hard for the SEC to require any corporate climate disclosures, Morrisey told Bloomberg Law. Scope 3 is only part of the problem, he said.

“The more they want to withdraw from this, we say, ‘Thank you,’ and we will be pleased to limit the scope of our litigation against them,” Morrisey said.

The Wall Street regulator often alters its final rules from earlier drafts. Companies from logistics businesses to investment banks are asking the SEC to dramatically scale back its climate mandates and give them more flexibility to better reflect any risks that a warming planet might eventually mean to their businesses.

Aspects of the rule they see as ripe for substantial revisions include Scope 3 emissions reporting as well as requirements that companies quantify the financial toll of extreme weather events and efforts to reduce their carbon footprints.

in its letter sent to the SEC earlier this year called the proposed footnote in the audited financial statements “overly burdensome” and the Council of Institutional Investors, which represents pension funds and endowments, told the commission to replace a 1% line item reporting threshold with the materiality standard typically used in financial reporting.

, which supports mandatory climate reporting, has urged the SEC to drop the financial statement requirement saying it could lead to inaccurate disclosures and erode their significance.

Yet tethering climate risk to financial risk remains a key goal of investors who are already making investment decisions based on such factors. Some sort of financial statement disclosure about climate impact is expected to remain in any final rule, despite objections from large Wall Street banks and others.

“That was something that quite frankly nobody was expecting to see in the proposal,” said Lauren Anderson, senior associate general counsel for regulatory affairs at the Bank Policy Institute, of the financial statement disclosure. BPI has organized meetings with the SEC and executives from , and others. “It goes much further than any other jurisdiction. And it’s just not something that companies are doing really at this point.”

Many investors back the core tenets of the SEC’s proposal—including Scope 3 emissions reporting—if the emissions are significant to the company or the company has set a related reduction target, according to a report from Ceres, a group that advocates sustainable investment practices. The group says it reviewed the response of 320 investors and asset managers who weighed in on the proposed climate rule.

Many investors want consistent and comparable metrics and more company details about the climate risks that only the SEC can offer through its rules.

“How would they roll this back and still make something useful for investors?” said John Kostyack, founder and principal of Kostyack Strategies, which advises environmental groups on the SEC’s climate disclosure proposal. “What’s in there matters a lot.”