More big companies are voluntarily sharing information about their supply chain emissions and other indirect greenhouse gas releases in their annual SEC filings, while the agency considers making those disclosures mandatory.

Fifty-four companies on the S&P 500 stock index mentioned Scope 3 emissions in their 10-K reports to the Securities and Exchange Commission this year, more than triple the 17 firms that discussed them in 2021, according to a Bloomberg Law review. But the extent of the reporting varied widely.

Etsy and United Airlines were among the few companies that disclosed Scope 3 emission measurements in their 10-Ks. Several more, including Hershey and Phillips 66, reported reduction goals for the emissions. T-Mobile, Ulta Beauty, and many others limited their disclosures to passing references to their interest in Scope 3.

The disclosure uptick follows the SEC’s March proposal to require large companies to report Scope 3 emissions in their 10-Ks, if material to their business or part of a climate goal. The public SEC filings have greater visibility and more protections against erroneous reporting than the sustainability reports that companies often tout on their websites.

The U.S. Chamber of Commerce and other business interests have pushed back against the SEC plan, citing challenges in calculating and reporting the emissions. But United and Etsy have encouraged the SEC to get more companies to disclose Scope 3 data in their 10-Ks, as they respond to investor demands for the information.

“We’re trying to raise the bar by showing that you can do it,” said Lauren Riley, United’s chief sustainability officer. 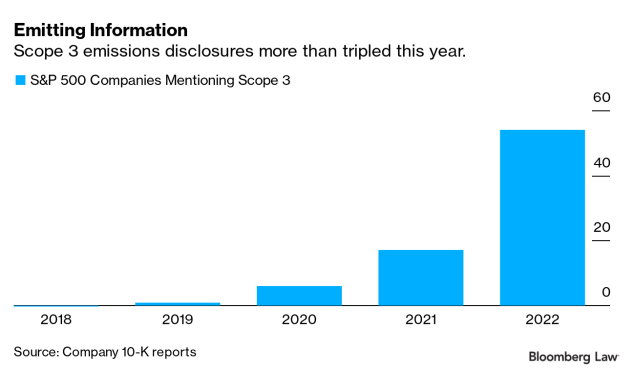 started putting some of its Scope 3 data in its 10-K this year, after releasing the information in its corporate responsibility report for years.

More granular data that makes up United’s total Scope 3 emissions still resides in the company’s corporate responsibility report. The document breaks down the emissions into releases from sources that include regional aircraft and vehicles, ownership stakes in other companies, and employee commuting.

United’s 10-K directs investors to its website for more details but says the information there shouldn’t be considered part of an SEC filing. The website, this year, also will have more recent Scope 3 emissions data from 2021 that Riley said United was unable to finalize in time for the 10-K.

All the emissions data is calculated and reviewed the same way, regardless of its location, Riley said. She said she had “very colorful” conversations with United’s legal and risk departments about making the company’s emissions information more transparent.

“We don’t have anything to hide,” Riley said. “And in fact, we want to facilitate a conversation.”

took a different approach than United, sharing detailed information about its Scope 3 emissions in its most recent 10-K from February.

The e-commerce company broke out Scope 3 emissions from several categories, including the goods and services the company buys and the transportation and distribution of its products.

Etsy has reported Scope 3 information in its 10-K since 2019, when it was the only S&P 500 company to do so, according to Bloomberg Law’s review.

“Integrated reporting has really worked for us,” she said. “Sharing our carbon accounting alongside our financial accounting in the 10-K has been the best way for us to be accountable to stakeholders.”

Like United, and made their first mentions of Scope 3 in the 10-Ks they filed this year, after previously including information about it in their sustainability reports.

Phillips 66 and Hershey limited what they said about Scope 3 in their 10-Ks to reduction targets for 2030, rather than publishing their total Scope 3 emissions as United did. Hershey plans to lower its Scope 3 releases by 25% by that time, while Phillips 66 intends to decrease them by 15%, according to their 10-Ks.

The addition of a Scope 3 goal in Hershey’s 10-K was a “reflection of our unwavering commitment to transparency and reducing our impact on the planet, to meet the evolving expectations of our stakeholders and for cohesion with ESG reporting,” company spokeswoman Ashleigh Pollart said. She added that more Scope 3 disclosures are in the candymaker’s annual environmental, social and governance report.

A Phillips 66 representative declined to comment, though the oil company also has an annual sustainability report with more detailed Scope 3 information.

and included no metrics when they brought up Scope 3 in their most recent 10-Ks this year.

Ulta said in its 10-K that the beauty store chain is “working with our brand partners to identify ways to work together to reduce Scope 3 emissions.” T-Mobile is “setting science-based targets to reduce our Scope 1, 2 and 3 greenhouse gas emissions,” according to the wireless carrier’s 10-K.

Ulta included the reference to Scope 3 to “better inform investors and various stakeholders about the company’s efforts in this area,” company spokeswoman Eileen Ziesemer said. A T-Mobile representative declined to comment.

Both T-Mobile and Ulta included more expansive Scope 3 disclosures in their annual ESG updates on their websites.

“These things will be considered and compared and analyzed,” Thornton said. “And I think having the SEC proposed rule will really help bring us forward.”

The SEC is looking to adopt climate disclosure rules by October, according to the agency’s latest rulemaking agenda. The possible inclusion of Scope 3 reporting requirements is a point of contention within the agency, however.

SEC Chair Gary Gensler has worried that Scope 3 disclosures—on top of requirements for companies to report their direct, Scope 1 and 2 greenhouse emissions—would give ammunition to legal challenges that industry groups and Republican officials have threatened to file.

Gensler agreed to include a Scope 3 reporting requirement in the proposal after pressure from fellow Democratic commissioners Allison Lee and Caroline Crenshaw. But Lee’s term has since expired, giving her successor, Jaime Lizarraga, a say on the final rules. Lizarraga hasn’t commented publicly about Scope 3 disclosures.

Removal of a Scope 3 disclosure obligation from the SEC climate rules won’t save companies from reporting on those emissions at some point as more investors seek the information, said David Hackett, Baker & McKenzie LLP senior counsel, who advises companies on environmental matters.

“The horse is out of the barn on the issue,” he said.