Groundbreaking reforms to safeguard a major source of short-term borrowing are again under scrutiny after the pandemic-related dollar liquidity crunch that prompted Federal Reserve intervention.

U.S. money-market funds -- which provide a lot of the cash that companies and governments borrow on a short-term basis -- underwent a major regulatory overhaul in 2016 to prevent a repeat of a damaging run on these funds that took place during the 2008 meltdown. But a coronavirus-related exodus of cash earlier this year from so-called prime funds -- those that are able to buy short-term company paper -- showed that this risk remains. And that has some suggesting that further tweaks may be warranted to shore up dollar funding markets. 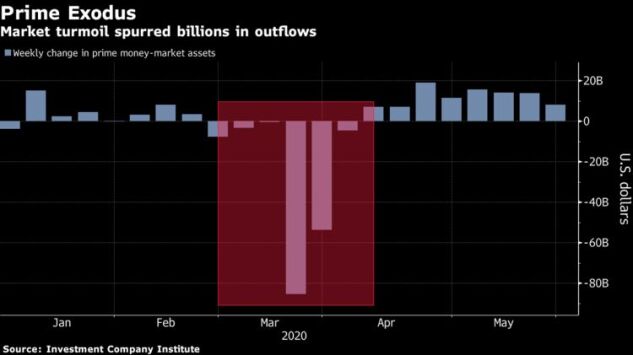 The onset of pandemic turmoil in March prompted investors to pull $155 billion from these types of funds in less than two months -- close to one-fifth of the total assets invested in such vehicles -- and flock to the relative safety of government money markets. That in turn forced managers to sell some of their longer-dated commercial-paper holdings and the influx of supply in the market made it next to impossible for borrowers to issue new short-term IOUs. With the market essentially frozen in March, the Federal Reserve stepped in with a suite of measures to help ease funding-market strains and bolster liquidity.

“People saw that the liquidity levels in these funds were declining” and “they didn’t know what the outcome would be if the funds’ seven-day liquidity buffer breached 30%,” said Barclays Plc strategist , referring to the requirement for funds to have readily available a certain amount of cash or assets that can be quickly converted. Rather than take the chance that funds might impose additional fees or suspend withdrawals, there was a “preemptive run” from investors, he said.

The prospect of a regulatory reassessment isn’t confined to the sphere of money-market funds. The upheaval which convulsed markets earlier this year has prompted many to question whether changes made to rules for banks and other markets in the wake of the 2008 crisis might require further tinkering. One significant change that has already been made is an easing by the Fed of rules around banks’ .

In U.S. funding markets, conditions have eased since the crisis reached its apex several months ago, but questions remain about whether regulators ought to alter money-fund rules -- for example by increasing the amount of extra cash they are required to keep on hand for redemptions before they need to sell assets. Other possible changes that might be considered, according to Barclays’ Abate, include putting limits on what proportion of prime fund cash is parked in commercial paper, or eliminating the so-called liquidity fees and gates that were introduced in the 2016 reforms.

Liquidity is “an important topic for regulators because how prime funds handled their redemptions had an impact on markets more broadly,” said , senior director at Fitch Ratings. 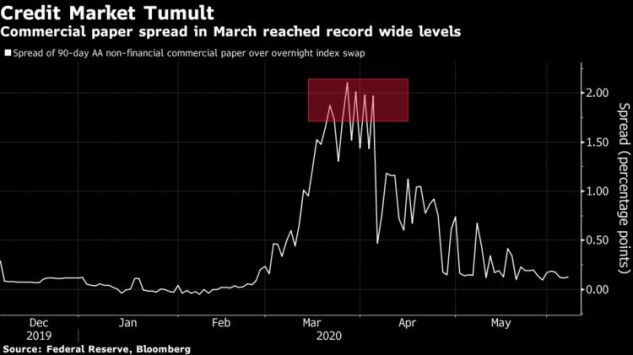 Abate believes the Securities and Exchange Commission could revisit money-market reforms once the pandemic has calmed, but some fund managers are skeptical that changes will be made.

Mandating a cap on how much funds allocate to commercial paper, for example, would be a hindrance to corporate borrowers, as these types of funds account for up to a quarter of their investor base, according , chief investment officer for global money markets at Federated Hermes Inc. in Pittsburgh. Although there’s always the ability to make minor adjustments, she doesn’t see recent events as drastic enough to prompt major changes.

An SEC spokesperson declined to comment, but , a director in the SEC’s Division of Investment Management, said at a meeting last month that she would hesitate to make recommendations for regulatory changes to address potential impacts discerned so far.

“Doing so risks being premature as we are still in the middle of the pandemic and its evolving impact on the U.S. and global markets,” she said.

Various members of Congress have introduced legislation since the last round of money-market reforms in 2016 -- most recently just last year -- that would allow for changes to rules for funds, including the use of different valuation methods. But even if such a bill had been passed, it would probably not have addressed the issues that cropped up during the recent turmoil, namely concerns about falling below required liquid asset buffers.

While the Fed’s swift implementation of new facilities helped unfreeze the short-term credit markets, “policy wonks” will still be on the lookout for regulatory changes, according to Abate.

“Fund managers handled the redemptions and handled their liquidity,” said Fitch’s Fayvilevich. “But the fact is that the Fed needed to intervene in the market and specifically set up the facility to provide money funds with liquidity, clearly something needs to be addressed there.”

To contact the reporter on this story:
in New York at aharris48@bloomberg.net

To contact the editors responsible for this story:
at bpurvis@bloomberg.net