Tesla Inc. vehicles in a parking lot after arriving at a port in Yokohama, Japan, on Monday, Feb. 14, 2022.
Photographer: Toru Hanai/Bloomberg

and told a judge that the is targeting them with “unrelenting investigation” for criticizing the government, while failing to pay Tesla shareholders $40 million the agency collected in 2018 settlements over Musk’s tweets.

The SEC “seems to be targeting Mr. Musk and Tesla” with “endless probes” because he remains “an outspoken critic of the government,” , one of their lawyers, said in a letter filed with the federal court in Manhattan on Thursday, the latest shot in a battle between Musk and the SEC over his Twitter posts about the electric carmaker.

The agency is using the settlements to “muzzle and harass” Tesla’s chief executive officer, Spiro said.

The federal judge Spiro wrote to has herself raised questions about the status of a $40 million fund established from fines paid for Musk’s controversial tweets, seeking accounting statements in a December order. 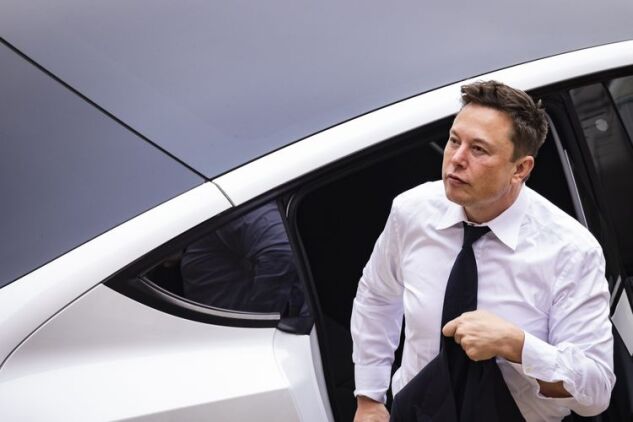 Press officials at the SEC didn’t immediately respond to a request for comment on the letter.

, the firm appointed in May to administer distributions from the fund, hasn’t filed required accounting statements, U.S. District Judge said in the December order. The SEC reached settlements with Musk and Tesla in September 2018 after suing the billionaire over his tweeted claims weeks earlier that he had the funding and investor support to buy out stockholders at $420 a share.

Rust told Nathan last month that it had received a draft distribution plan from the SEC and that it’s awaiting approval of the plan by Nathan and transfer of the funds into an escrow account.

The SEC alleged the tweets were false, and while Musk and Tesla didn’t admit wrongdoing in the accord, the agency set up a “fair fund,” with $20 million each from Musk and Tesla, to repay investors Musk’s statements hurt.

In the letter, Spiro asked Nathan for a hearing “to address why the SEC has failed to distribute these funds to shareholders but has chosen to spend its energy and resources investigating Mr. Musk’s and Tesla’s compliance with the consent decree by issuing subpoenas unilaterally, without court approval.”

“Despite the SEC’s inattention and dereliction when it comes to paying Tesla’s shareholders, it has been more than energetic in going after Mr. Musk and Tesla, largely to police Mr. Musk’s public pronouncements via Twitter,” he said.

The settlements haven’t resolved conflict between the SEC and Musk over his company-related tweets. In 2019 the agency asked Nathan to find that the billionaire violated them by tweeting about the company’s outlook for producing cars. Both sides agreed in April of that year to add provisions limiting the topics Musk can post about without first running them by a company lawyer.

Then, in November, the SEC subpoenaed Tesla for information about its governance processes and compliance with the 2018 settlements after Musk took a Twitter poll asking whether he should sell 10% of his Tesla stake. The carmaker’s shares plunged 16% in the following two trading days.