Ripple and ethereum cryptocurrency 'altcoins' sit beside a smartphone displaying the current price chart for ethereum on April 25, 2018, in London.
Photo by Jack Taylor/Getty Images

The SEC took action against boxing champ Floyd Mayweather and music producer DJ Khaled after they were paid by cryptocurrency issuers to tweet promotional statements about investing in Initial Coin Offerings (ICOs). This was a warning shot to would-be ICO promoters that the SEC is watching, two Michelman & Robinson LLP attorneys warn, and unlawful endorsements will be weeded out and penalized.

The recent “altcoin” hysteria that peaked at the end of 2017 and then came tumbling down in the cryptocurrency crash that followed was illustrative of the mindset of many dreaming of a quick buck. Within the sector, many crypto companies (not to mention hopeful investors) are bullish on a rebound in the wake of the turmoil of 2018.

For boxing champion Floyd Mayweather and celebrated media personality and music producer DJ Khaled, the altcoin turmoil they have endured has nothing to do with valuation. In November 2018, the Securities and Exchange Commission ordered them both to pay disgorgement, penalties and interest for promoting investments in ICOs (Initial Coin Offerings), including one from cryptocurrency issuer Centra Tech, Inc. 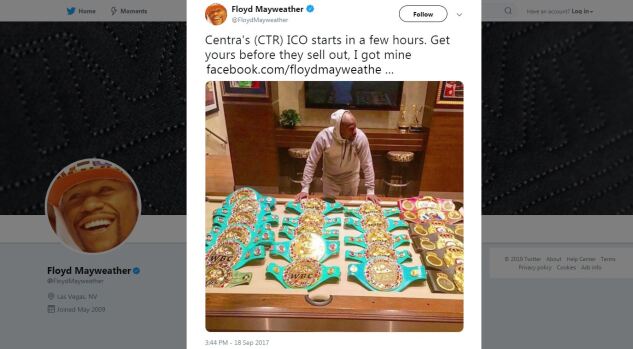 The two celebrities settled the SEC’s charges without admitting guilt and agreed to pay a combined total of $767,500 – charges that stemmed from a series of tweets they posted in exchange for promotional payments from Centra Tech, among others.

The problem was that Mayweather and Khaled failed to disclose that their promotional efforts on Twitter were paid endorsements.

Instead, when Khaled touted Centra Tech as a “game changer,” and Mayweather referred to himself as “Floyd Crypto Mayweather” and told his online followers to “get [in on the ICOs] before they sell out, I got mine . . .,” investors had no idea that the influencers earned $50,000 and $300,000, respectively, for the publicity.

The SEC has since spoken by way of its investigation and resulting charges and made clear that the payment-for-endorsement arrangement should have been divulged. The failure to do so was a violation of law. A costly one at that (parenthetically, Mayweather and Khaled have also been barred from promoting ICOs for a period of time).

For purposes of context, it is important to note that Mayweather and Khaled hyped the ICOs after the SEC issued a report in July of 2017 suggesting that altcoins may be characterized as securities subject to federal securities laws, including the applicable anti-touting provisions of the Securities Act of 1933.

The net effect of that language, set forth in Section 17(b), is that potential investors must be able to discern when an endorsement has been paid for or is coming from a disinterested party. Mayweather and Khaled crossed that divide, knowingly or not, drawing the scrutiny of the SEC.

Some have floated the idea that the SEC made an example of Mayweather and Khaled, and to a certain extent this may be true.

However, in the age of social media and instant access to broad swaths of followers and with cryptocurrency still a very popular investment, the SEC’s charges against the two may also point to a new emphasis on enforcement actions under Section 17(b), which essentially outlaws shilling for securities while maintaining an unbiased appearance.

The pay-for-promotion paradigm within the cryptocurrency space picked up significant steam when Bitcoin accelerated in popularity. In response, the SEC issued a pubic statement in November 2017 warning that celebrities “who endorse an investment often do not have sufficient expertise to ensure that the investment is appropriate and in compliance with federal securities laws.”

The Commission has had even more to say on the topic, recently tweeting, “Social media influencers are often paid promoters, not investment professionals,” and “the securities they’re touting . . . could be frauds.” This language is less than subtle, and the takeaway is that the SEC will likely continue to pursue this issue stridently. Celebrities and influencers should take note, as should those who represent these high-profile clients.

Advice for Those in the Hype Game

Talent and social media mavens alike should be advised against attaching their names to security offerings like altcoins, certainly without first properly vetting them and probably not at all unless they are registered as broker-dealers.

This is because section 15(a)(1) of the Securities Exchange Act makes it unlawful for a person to “attempt to induce the purchase or sale of, any security” unless he or she is a broker or dealer under the rules and regulations of FINRA, which regulates certain aspects of the security industry.

And, as Mayweather and Khaled can attest, no one should ever endorse or otherwise promote cryptocurrency (even if they are broker-dealers) in exchange for payment without disclosing that fact.

Long story short: the SEC’s Mayweather and Khaled actions should serve as a warning shot to would-be ICO promoters that the Commission is watching and unlawful endorsements will be weeded out and penalized.

Michael Poster is a partner at Michelman & Robinson LLP, a national law firm with offices in Los Angeles, Orange County, Calif., San Francisco, Chicago, and New York City. He is head of the firm’s Corporate & Securities Practice Group, and focuses his practice on corporate and financing matters, particularly in the music industry.

Peter Cifichiello is a senior associate at Michelman & Robinson LLP, specializing in mergers & acquisitions and other commercial transactions such as licensing, corporate and financing deals for media, entertainment and technology companies, small and mid-cap corporations and financial institutions.