The SEC’s fiscal 2019 Division of Enforcement report leaves clues on where the agency may be headed in 2020. Akerman attorneys take a close look at the report and predict a rise in SEC accounting fraud investigations, particularly if the economy deteriorates.

In its annual report, the Securities and Exchange Commission’s Division of Enforcement described its enforcement efforts over the last fiscal year, but also provided helpful clues about where the SEC’s enforcement regime may be headed.

Many of the SEC’s priorities have remained the same. It’s focusing on:

In addition, the SEC has sought to improve its coordination with other law enforcement authorities, accelerate the pace of its investigations, and persuade companies and whistleblowers that it is willing to give meaningful credit for cooperation.

The SEC’s report highlights a number of significant enforcement actions over the last year, including those against Facebook, Mylan, Fiat Chrysler Automobiles, Nissan, Hertz Global Holdings, PPG Industries, and Comscore. Those cases were well-publicized, but the report gave more insight into how the SEC has directed its resources.

Although the U.S. Supreme Court’s 2017 decision in Kokesh v. SEC has limited the SEC’s ability to seek disgorgement beyond the five-year statute of limitations, the agency was able to increase its disgorgement collections from $2.506 billion to $3.248 billion, an increase of approximately 29%. The SEC expressed dismay that it could not collect $1.1 billion in disgorgement that it believes that it would have collected prior to Kokesh.

The biggest change occurred in actions involving investment advisory/investment company issues, which increased from 108 in FY 2018 to 191 in FY 2019, an increase of over 75%. 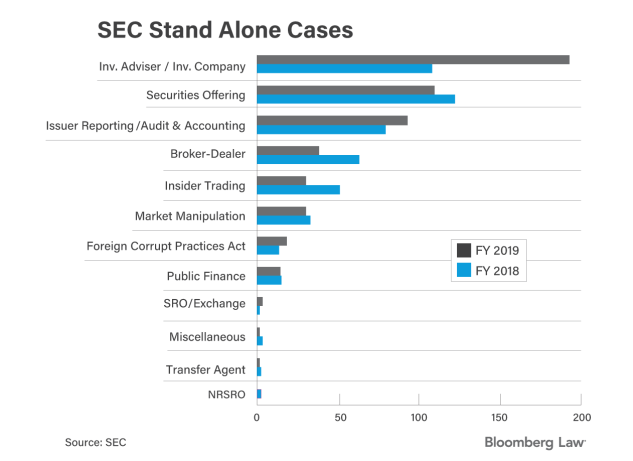 Continued Focus on the Retail Investor

The SEC reported that 69% of the standalone actions (excluding SCDI actions) involved charges against one or more individuals. The Brixmor Property Group Inc. case, for instance, alleged that the company’s most senior executives fraudulently manipulated a key non-GAAP metric relied on by analysts and investors to evaluate the company’s financial performance.

In many of these actions, the SEC has tried to establish the same principle: If a product is a security (regardless of the label attached to it), the securities laws apply to that product. And those laws apply to those who issue, promote, or provide a platform for buying and selling that product.

What Does the Report Mean for Fiscal 2020?

SEC investigations and enforcement actions will likely rise over the next year, particularly if the economy deteriorates. History has shown that an increase in enforcement actions almost always follows a declining economy. As companies fail to meet their earnings estimates, stock prices drop, whistleblower complaints rise, adverse publicity mounts, and the SEC often appears with a subpoena. Companies should prepare themselves for that possibility now.

We predict there will be a rise in accounting fraud investigations. Among other things, the SEC will likely focus on examining companies that have not revised or disclosed changes in their accounting estimates in response to a changing economy.

If estimates were changed, there may be questions why the estimates were not changed sooner. The SEC is already pursuing some high-profile investigations of companies who have announced billion-dollar write-downs of goodwill, including General Electric and Kraft Heinz.

We would not be surprised to see an increase in investigations about disclosures in securities filings. In the Mylan case, the SEC laid down a marker that it will expect earlier disclosures by corporations who have been the subject of a regulatory subpoena, particularly if the investigation centers around an important product of the company (in the case of Mylan, the EpiPen).

We expect that the SEC will continue to vigorously assert its prerogative to regulate ICOs. In the area of cyber security and privacy, we believe that the SEC will search for companies that have not timely disclosed the existence of data breaches to shareholders.

Now that the SEC has responded to the Supreme Court’s Lucia decision, we would not be surprised to see a gradual increase in the SEC’s use of administrative proceedings in contested matters. That is an issue that the defense bar will continue to vigorously contest, because administrative actions have far fewer procedural protections than federal court proceedings.

We predict that the SEC will vigorously seek legislation confirming its right to seek disgorgement from companies beyond a five-year statute of limitations. If the Supreme Court determines in Liu in 2020 that the SEC is not permitted to collect disgorgement in federal court actions, the SEC will likely appeal to Congress to change the law.

Finally, we believe the SEC will continue to search for cases where it can emphasize the duties and obligations of the “gatekeepers.” If the SEC can use enforcement actions to persuade the outside lawyers, the auditors, and the audit firms to tread cautiously, it will have carry-over effects to public companies, which the SEC believes will further its goal of protecting Main Street investors.