Few people have benefited more from the boom in ESG investing than .

Almost four decades ago, Dodson founded Parnassus Investments -- a little known firm outside of ESG circles -- and watched it grow into the world’s largest money manager dedicated to environmental, social and governance factors. The 78-year-old retired in October after he and his family sold their stakes in the business.

Dodson lauds how ESG has over the years helped push corporations and investors alike to act on issues such as worker rights and environmental protections. But as more money piles into the strategy, many companies and investors are , Dodson said.

The ESG bubble is “a little disconcerting,” Dodson said in an interview. “It’s good that more people are talking about ESG. But if you look at how some money managers determine if a company is socially responsible, it’s not very rigorous and they’re not really strict in their criteria. We have a lot of money coming in and they use ESG as a marketing tactic.” 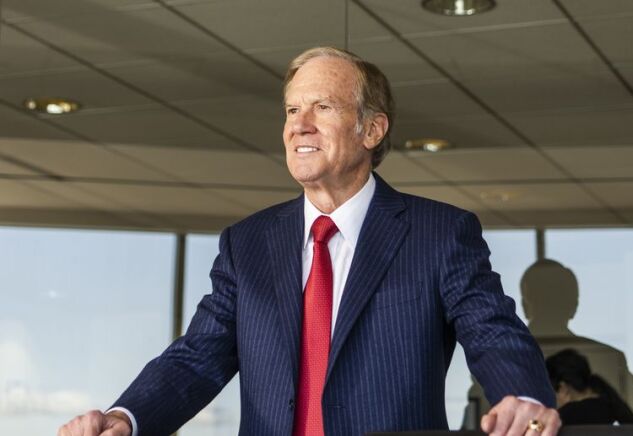 Stronger regulations are needed to clamp down on so-called greenwashing and address underlying issues such as climate change, Dodson said. “ESG alone isn’t going to save the planet.”

To counteract overstated claims, Dodson said investors need to be more rigorous in their analysis of companies by pressing them for specifics on the actions they’re taking on ESG issues, and disregard answers that are too general. Investors themselves should specify what standards they are using in their strategies, while regulators should require fund managers to provide more details about their ESG tactics, he said.

A deluge of money has flowed into ESG in the past several years, making it one of the hottest areas of investing. The enormous growth has prompted other current and former sustainability executives and academics to in tackling systemic environmental and societal issues.

Dodson echoes Matt Patsky, who runs Trillium Asset Management, one of the oldest ESG firms. He said last year that regulators’ efforts to rein in money managers’ ESG claims are the “ to the industry in years.” Regulators in Europe are seen as being closer than their U.S. counterparts to rolling out ambitious rules aimed at stamping out greenwashing.

Dodson, who ran a small bank in the late 1970s where he created a savings account that helped finance solar-energy projects in San Francisco, was inspired early in his career by Benjamin Graham’s book “The Intelligent Investor,” which described how to invest in undervalued stocks. Dodson sought to pair that strategy with socially responsible investing and started Parnassus in 1984. One of the funds he ran, which is now called Parnassus Mid Cap Growth, rose at an annual rate of 10.1% from the end of 1984 through April 2018, compared with the 11.2% return of the S&P 500, according to the firm.

Parnassus has steadily expanded, with assets increasing to $48 billion at the end of last year from $5.5 billion a decade earlier. The San Francisco-based firm prospered as the universe of ESG funds ballooned globally to about $4 trillion, according to data compiled by Morningstar Inc. In 2021, Parnassus attracted a record $4 billion of new money and generated $320 million of fees, more than any active manager of ESG funds, Morningstar said. 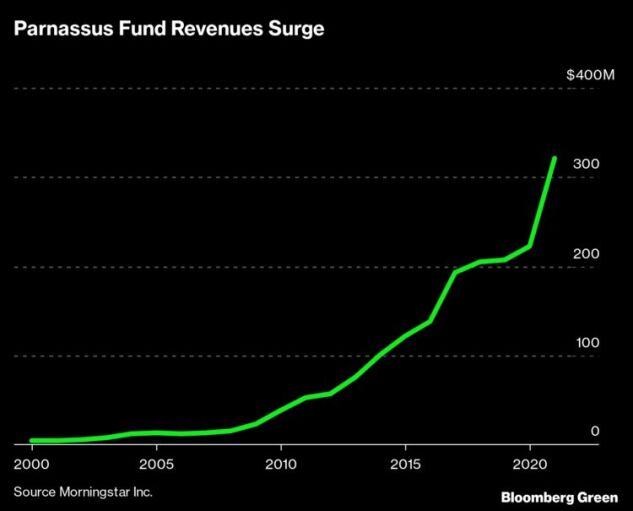 Dodson stepped down from running Parnassus in 2018 and became chairman. He continued to oversee one of the firm’s funds until the end of 2020. Four months ago, Dodson sold control of Parnassus to for about $600 million. Dodson and his family owned about 62% of Parnassus, and today Dodson is worth about $150 million, according to the Bloomberg Billionaires Index.

Parnassus plans to start filing that press companies to address ESG issues and is looking to hire someone to lead the effort, said company spokesman . It was something the firm hadn’t done under Dodson’s leadership because, Dodson said, they were too time-consuming. While Parnassus voted in favor of proposals filed by other investors, the fund preferred to raise issues directly with corporate executives in private meetings, Dodson said.

Dodson said he sold his stake in Parnassus to secure liquidity. He’s so far spent his time in retirement cycling daily around San Francisco’s Embarcadero waterfront, focusing on his charitable donations and monitoring investments. He said U.S. stocks are overvalued and expects them to fall about 20% from their January peak before recovering to “much more realistic valuations.”

To contact the author of this story:
in New York at skishan@bloomberg.net