A federal judge challenged a lawyer for about its efforts to thwart a new kind of market order from , the stock exchange operator made famous by “Flash Boys.”

“It’s you who’s going to a federal agency and saying stop a private entity from doing what they want to do,” U.S. Circuit Judge Justin Walker said at a hearing in Washington on Monday, after attorney Jeffrey Wall argued that the order type interferes with the natural course of the market.

The order type, known as D-Limit, has a roughly 350-microsecond delay to blunt the advantage of high-frequency traders. After the approved it last year, Citadel Securities, the electronic trading firm founded by billionaire , sued the SEC. It’s asking the court to send D-Limit back to the regulator for reconsideration and reversal.

“You’re the one who’s trying to regulate your way into a market victory,” Walker said, amid sharp questioning of both sides by a three-judge panel. 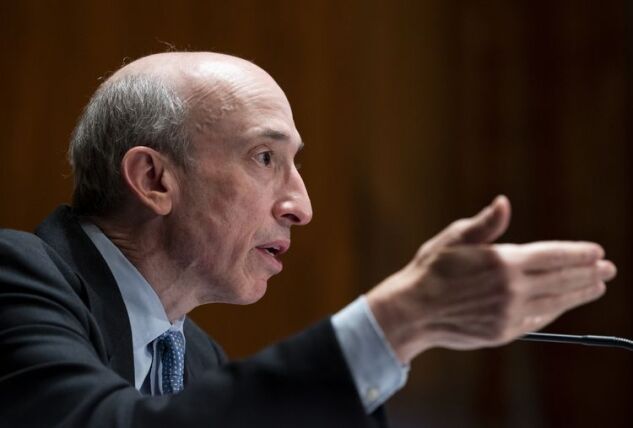 The hearing came as the SEC under weighs to stock market rules that could directly affect Citadel Securities’ business. For example, Gensler has said the agency may ban the widespread practice of payment for order flow, in which trading firms pay retail brokerages to execute their trades. The agency hasn’t released a concrete proposal for such a change.

IEX says the D-Limit, or discretionary limit, order can help even out high-frequency traders’ use of amped-up computing power and fast data connections. The exchange, launched in 2016, began offering the order type last October after the SEC approved it that August.

IEX was founded to “level the playing field” so that the everyday investors, people putting money into their retirement funds, “have a shot,” , a lawyer for the exchange, argued at the hearing. High-frequency traders such as Citadel Securities and are the ones that profit by exploiting the microsecond differences, she said.

Others are “in the middle of a speed war” they “never signed up to fight,” she said.

Wall argued that by introducing a feature that slows down a trade, IEX isn’t necessarily getting the best price for the customer.

“Once an order hits the exchange,” you “can’t tinker with it,” he told the judges. IEX is putting the market participant at a disadvantage by not completing the order immediately, and is moving orders off of other exchanges and onto its own to increase liquidity and its overall profits, he said.

At one point Walker asked Wall whether he acknowledged the existence of latency arbitrage, a strategy high-frequency trading firms use to profit off of small price differences between the bid and ask orders by acting in tiny increments of time. Wall said it’s just large-scale trading that’s tripping IEX’s controls.

“This is just a sloppy order,” he said of the SEC’s approval of D-Limit. “It takes data and it misreads the statistics. It reads like it’s all roses and no thorns.”

U.S. Circuit Judge asked Wall if he was arguing that the SEC didn’t have the authority to approve D-Limit. He said the regulator had to abide by securities laws and rules, and that in its review of data in the D-Limit approval process there was no evidence that Citadel Securities was engaged in latency arbitrage.

The panel had pointed questions for lawyers for the SEC and IEX as well, quizzing them on the ordinary lags caused by the physical location of trading infrastructure, as distinct from an intentional device like D-Limit that’s designed to slow trading.

“Isn’t there a difference between a geographic delay that’s inherent and unavoidable” and D-Limit, U.S. Circuit Judge asked Stetson.

Summing up a point, Wall told the judges that “exchanges are meant to be platforms -- they’re meant to facilitate trading.” IEX is the only exchange “that’s reaching in and repricing the quotes themselves,” he said. “That’s sort of a novel thing.”

Besides Citadel Securities, opponents of the new order type include and . Firms that have voiced their support of D-Limit orders include , , , Virtu and

The case is largely about the regulatory process. Citadel Securities argued in a filing that the SEC violated the Administrative Procedure Act, which sets requirements for making changes to agency regulations. The firm said the SEC disregarded important data showing that D-Limit would hurt retail investors.

The SEC said in its own filing that it “considered the extensive data in the record and comments from numerous interested parties.”

The trading firm has a tough fight on its hands, , head of market structure research for Bloomberg Intelligence, said in an interview.

“You’re quibbling over 350 microseconds, which is a hard argument to make,” Tabb said.

The case is Citadel Securities LLC v. SEC, 20-1424, U.S. Court of Appeals for the District of Columbia Circuit.

To contact the reporters on this story:
in New York at kdoherty23@bloomberg.net;
in Washington at davidyb@bloomberg.net