Workers clean near an escalator at Grand Central Station in New York City in May 2020.
Photographer: Eduardo Munoz Alvarez/Getty Images

Three months after President ordered the U.S. Labor Department to consider enacting a rule to protect workers from Covid-19 infection, the agency has yet to issue an emergency temporary standard or even say whether a regulation is needed.

Biden’s Jan. 21 order had given DOL’s Occupational Safety and Health Administration a March 15 deadline to release a rule, but OSHA officials still haven’t said publicly whether they believe the pandemic poses a grave threat to workers’ safety, the threshold needed to advance an expedited emergency rulemaking.

Earlier this month, a department spokesperson said Labor Secretary Marty Walsh had ordered the rulemaking’s underlying assessment of Covid-19 to be “updated to reflect the latest scientific analysis.”

DOL spokesman Jesse Lawder told Bloomberg Law Tuesday the department had no information to share on whether that review had been completed or when the agency expects to send an emergency rule to the White House’s Office of Information and Regulatory Affairs, which typically conducts a final analysis before a regulation is enacted.

The delay is frustrating worker advocates and some Democratic lawmakers, who have pressed OSHA under the Trump and Biden administrations to issue a Covid-19 standard or a broader infectious disease rule. U.S. law requires employers to maintain a workplace free of known and deadly hazards, but no federal statute requires companies to take precautions to safeguard workers against airborne transmission of pathogens.

“We have not yet beaten this pandemic and we must continue to take necessary steps to protect America’s workers and ensure they feel safe in the workplace,” Sen. (D-Wis.) said in a written statement.

“I urge the Department of Labor and OSHA to move forward with an emergency temporary standard as soon as possible to keep our workers safe and provide clarity for employers,” the senator added. 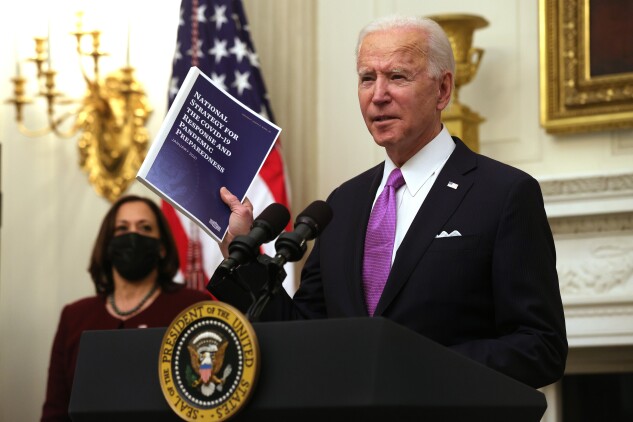 Three states have enacted workplace rules in response to Covid-19, and all took longer than three months to complete. Yet as the waiting continues, Mike Wright, who’s retiring after four decades as director of safety and health for the United Steelworkers, said he’s concerned the push for vaccinations is lessening the Covid-19 standard’s priority.

“There are a lot of people who misguidedly think the pandemic is over,” Wright said.

Rep. (D-Conn.), who authored a bill to defend health-care workers against violence that the House approved April 16, said he doesn’t believe Congress needs to step in with legislation requiring the DOL to enact an emergency Covid-19 standard. Such a measure, however, would be unlikely to clear a 60-vote procedural hurdle in the Senate.

“We’re willing to defer to the agency at this point,” Courtney said.

“I personally think we do need an airborne pathogen workplace standard, and, frankly, not just in the health-care setting,” he added.

Few, if any, Republican lawmakers have voiced support for an emergency temporary standard.

The DOL hasn’t responded to a Feb. 25 letter from Rep. (R-N.C.), ranking member of the House labor panel, that asked why an emergency standard was necessary when Biden’s goal is for every adult to be eligible for a vaccine, a GOP committee aide said.

While no employer groups have announced they’ll challenge a federal standard in court, employer-side attorneys have said an emergency rule could be contested on the grounds that vaccines and precautions recommended by the Centers for Disease Control and Prevention already protect workers.

Manesh Rath, a partner with Keller and Heckman in Washington, D.C., who has testified before Congress on Covid-19 worker health issues, said that an OSHA emergency standard could be overturned by a federal appeals court if the plaintiffs can show existing precautions and treatments are effective.

“OSHA must show that their requirements, and only their proposed requirements, would substantially reduce exposure to imminent harm,” Rath said.

Wright said he expects a federal standard to face a court fight, but that OSHA and DOL shouldn’t delay the rule out of that concern.

“OSHA might lose, but it is far better for OSHA to take this on and lose than to not take it on at all,” Wright said.

Virginia, California, and Oregon issued their own Covid-19 emergency temporary standards last year. All took more than four months to draft and enact.

State legislatures in Maryland and New York passed bills in April requiring state agencies to enact virus worker protections, but governors have yet to sign them into law.

Virginia worker groups petitioned the state on April 23 last year for a Covid-19 standard, and Gov. Ralph Northam (D) signed an executive order on May 26 instructing state agencies to begin drafting it. The regulation took effect July 27, following four days of debate by the state Safety and Health Codes Board and a 10-day comment period.

Oregon officials announced June 27 that they would start drafting a standard. After several revisions and time for public comment, the rule was enacted Nov. 7.

California worker advocates petitioned the state on May 20 to consider a rule. After state agencies agreed a standard was needed and the state Occupational Safety and Health Standards Board held public meetings, the emergency rule was issued Nov. 30.

Doug Parker, a California official who helped draft the regulation, is now the Biden administration’s nominee to lead federal OSHA.