OSHA data shows that since 2009, UPS has been hit with more than twice as many citations for blocking exits than its rival, FedEx Corp.
Photographer: Luke Sharrett/Bloomberg

When Bill Davis complained about blocked exits at the warehouse in Sharonville, Ohio, he says nobody at the company listened. But the Occupational Health and Safety Administration did. Davis’ complaint led to a proposed fine exceeding $200,000.

On Friday, March 8, Davis was fired.

“I complained about these issues almost daily,” said Davis, a 33-year employee who said he was terminated for “gross insubordination.” The former package driver filed a complaint with Cincinnati Area OSHA offices last August over alleged ongoing safety hazards affecting walkways and exits. “The company likes to say they put safety first, but I’d like to see the company live up to their claims,” Davis said.

The company is contesting the citations, which were issued by OSHA on Dec. 17. The contested citations are now being handled by the Occupational Safety and Health Review Commission; the case is now in mandatory settlement status.

OSHA data shows that since 2009, UPS has been hit with more than twice as many citations for blocking exits than its rival, In addition to the violations, lawsuits and interviews with dozens of current and former employees at UPS indicate workers are often dissuaded from filing complaints about unsafe conditions, and when they do, they may face retaliation.

UPS says its first priority is the safety of its employees, who receive regular training on the company’s methods and procedures to safely operate facilities.

Davis says he was fired for his whistleblowing, but UPS would not comment his specific case. UPS provides employees “several ways to report their concerns in confidence so that appropriate action can be taken,” spokesman Matthew O’Connor told Bloomberg Law in an emailed statement. “When an issue is brought to our attention, we investigate the situation and take appropriate action.”

Worker lawsuits against UPS and interviews with current and former workers across the country paint a managerial culture that suppresses injury and safety reporting.

The exponential growth of over the past decade has put considerable strain on the big package delivery companies, which have seen revenue rise as more and more Americans buy practically everything they need online. UPS’s revenue surged to $71.9 billion in 2018 from $55.4 billion in 2013. FedEx revenue went to $65.5 billion from $44.3 billion over the same period.

Egress issues, or blocking pathways to exits, are the greatest hazard for workers in the package transport business, according to OSHA. Workers say cluttered boxes that fall from constantly moving conveyor belts pile up and block exits and pathways that contribute to the variety of bodily injuries which are an inevitable part of handling thousands of packages a day.

Davis is not alone.

When former UPS worker Michael Campbell complained about walkways dangerously overflowing with packages in the company’s Pleasantville, N.J., warehouse, the response from management was blunt, according to a September 2017 lawsuit against the Atlanta-based courier service.

His boss said “people get fired” for reporting injuries and even threatened to “kill this mother f*****" (meaning Campbell) if he complained, according to the lawsuit.

And when Campbell was treated for a torn or sprained thumb, his supervisors directed him to falsify documents to keep the incident off the books, the suit alleges.

“UPS’s first priority is the safety of our employees, who receive regular training on the company’s methods and procedures to safely operate our facilities,” the company spokesman, O’Connor, said. “This includes how to safely exit the workplace in the event of an emergency.”

A Bloomberg Law analysis of violations for egress violations shows in open and closed cases that UPS has been subjected to proposed fines of at least $562,637 for 67 egress violations between Jan. 1, 2009 and Dec. 31, 2018, tops among private package delivery services in the U.S. The total includes a $200,473 proposed fine for the Sharonville facility, the one Davis complained about. Total egress-related violations against FedEx numbered 25. The third-largest service provider, DHL, was cited six times. Proposed fines totaled $49,719 and $10,049 for the two companies, respectively. 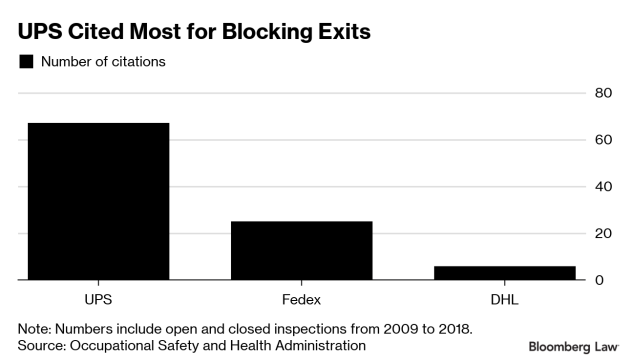 A representative for FedEx declined to comment for this story. DHL didn’t respond to requests for comment.

OSHA had 753 inspectors in 2018 responsible for the health and safety of 130 million workers at 8 million work sites.

UPS came to a corporate-wide settlement with OSHA in 2009 after agency officials discovered exit and entry egress violations in locations across the country. In the settlement, UPS only acknowledged that it had received the citations.

Since then, distribution centers in Illinois, Georgia, and New Jersey were cited for similar violations, according to OSHA documents. The settlement agreement is still in effect, an OSHA official confirmed. When asked about whether UPS was in violation due to these citations, OSHA declined to comment.

O’Connor, the UPS spokesman, said the company maintains regular correspondence with OSHA about the safety of its employees.

A representative from the International Brotherhood of Teamsters, which represents tens of thousands of UPS warehousing workers and drivers, put the onus on the U.S. Labor Department to act.

“We recognize that egress violations are an ongoing problem at UPS and have addressed issues affecting our members’ safety during negotiations with the company,” David White, a spokesman for the union, told Bloomberg Law. “We are also monitoring and assisting the Department of Labor as it pursues compliance actions regarding this matter.” 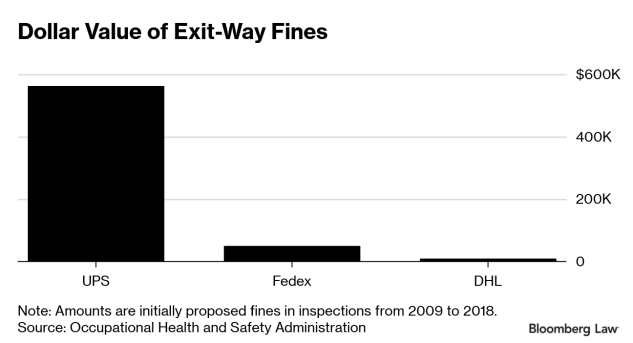 A lawsuit filed in Ohio state court alleges UPS has a management culture willing to break safety laws for the sake of making production goals.

Aaron Wooles brought a lawsuit in U.S. District Court for the Southern District of Ohio in October 2018. Among his claims: He witnessed managers “conceal safety infractions.”

Wooles claims he submitted four corporate concerns using the company’s “Help Line” website and reported the misconduct of a supervisor on five occasions before he was terminated from his job as site manager in February 2018, according to court documents.

His lawyer, Bradley N. Jeckering, calls the corporation the “Wild West” when it comes to safety. The company filed a motion to dismiss, which is pending. Meanwhile, the parties are required to submit their expert witnesses by August and September.

“When an issue is brought to our attention, we investigate the situation and take appropriate action,” O’Connor at UPS told Bloomberg Law.

Paul Taylor, an attorney with the Truckers Justice Center in Minnesota, who represents UPS workers in claims against the company, said it applies “constant pressure to meet time allowances. There’s no room for flexibility there.”

Campbell alleges that “due to the production flow and bottlenecks in the conveyor system, the problems with egress and falling packages were a regular occurrence.”

Campbell says he was ultimately forced to quit his job due to the harassment and retaliation he faced for bringing safety issues to light.

“One of UPS’s core values is people should be respected and protected in the workplace,” company spokesman O’Connor wrote. “UPS does not tolerate comments or actions that are considered harassment or discriminatory, and provides employees with several ways to report their concerns in confidence so that appropriate action can be taken.”

Congestion problems could become worse, however. Retailers like Amazon.com want to deliver packages in two days, which has put pressure on the system.

Keeping pathways to exits clear is critical for workers who may need to get out of a building in a hurry.

Campbell, who controlled the conveyor belts on the “sort deck” at the company’s warehouse distribution center in Pleasantville, says the company forced him to falsify injury records and disregard the company’s policy, according to his suit.

In October 2016, Campbell was injured when his thumb was caught between an exit door and the side of a car. He was told by his supervisor to go back to the clinic and state that it was not a work-related injury.

Addressing the various lawsuits filed against the company, O’Connor said there are times “when UPS must defend itself from unfounded and unsubstantiated allegations about workplace safety. When this occurs, we vigorously defend ourselves.”

“The working conditions created by my superiors have become unbearable to the point I am unable to execute all of my duties and I also fear for my safety, as well as the safety of the workers under my supervision,” Campbell wrote in his resignation letter before filing a claim against the company.

Another worker, Irving Gasca, filed a lawsuit against the company this time last year, after he says he was fired the day after notifying OSHA of the severity of egress violations at a warehouse in Hodgkins, Ill., according to a complaint filed in an Illinois county court.

In July 2016, Gasca reported egress issues to management and provided images and recordings to management. The following August he reported the issue to OSHA, and days later he was fired. Gasca claims he was retaliated against for bringing egress issues to light, according to court documents. That case was privately settled in September.

Sam Bucalo, a retired UPS driver who prompted the 2009 settlement between OSHA and UPS, spoke to Bloomberg Law about his experience at the company and what he hopes to see in the future.

“They made this agreement in 2009 and it didn’t really address the problem,” he said in a phone interview, adding that he was unhappy with the settlement agreement, claiming it didn’t do enough to protect workers. “It puts a lot of people’s lives in danger.”

Campbell and UPS headed to mediation on March 14.