New York next month will begin the process of requiring employers to adopt plans to protect workers against airborne infectious diseases—the first time a state has required all businesses to take such precautions.

“The HERO Act is a permanent airborne infectious disease standard,” said Lisa Zucker, an attorney with the New York Civil Liberties Union who advocated for the legislation, which Gov. (D) signed into law May 5.

On July 5 or soon after, New York’s Department of Labor is expected to release several model prevention plans for different industries, setting in motion the law’s compliance schedule. Within 30 days every employer in the state is required to have established one of the model plans or their own unique program, and they must educate workers on the specifics by September.

Employers that fail to implement a program could be cited by the state or sued by their own employees to force compliance.

The HERO Act also contains a mandate that, starting in November, employers must cooperate with workers who want to establish health and safety committees that can address any related issue, not just airborne infectious diseases.

California has had a similar airborne infectious disease law on the books since 2009, but it applies only to health-care employers.

New York was the epicenter of the coronavirus outbreak in the U.S. early last year, making it a focal point for federal workplace safety enforcement. Since March 2020, businesses in the state and neighboring New Jersey have had the most virus-related citations issued by the federal Occupational Safety and Health Administration.

Federal OSHA on June 21 published an emergency rule to protect health-care workers from Covid-19. It is also proposing a more wide-ranging airborne infectious disease standard focused on health-care workers and others who are at “increased risk of exposure to potentially infectious people.” The agency could issue a notice of proposed rulemaking in December.

Most New York employers are likely already familiar with the topics from complying with the state’s Covid-19 emergency orders, Zucker said. 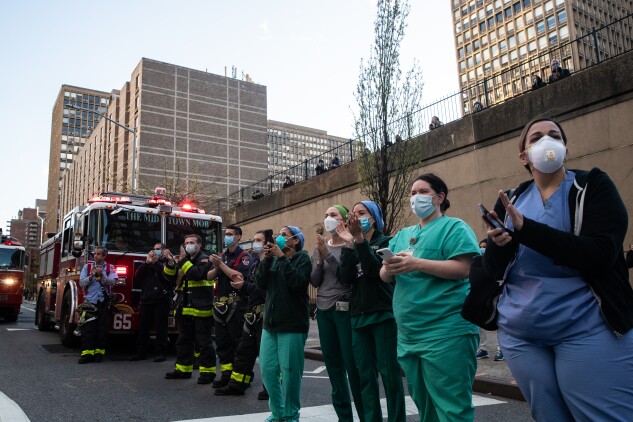 On April 21, 2020, when New York City was the center of the coronavirus pandemic, medical workers and firefighters gathered outside NYU Langone Health hospital to applaud to front-line health-care workers’ efforts to treat ill and dying patients.
Photographer: Jeenah Moon/Getty Images

Jenifer Bologna, a principal with management-side firm Jackson Lewis P.C. in White Plains, N.Y., said she expects the state-issued plans to take a high-level viewpoint and not be detailed instructions.

For example, a decision that an infectious disease has become a hazard serious enough for employers to activate their plans would likely come from state authorities declaring a public health emergency and not be up to employers to determine, Bologna said.

The state labor department declined a request to discuss the prevention plans.

There is a catch to the implementation process. Because the state is drafting the plans as an emergency rulemaking, there hasn’t been a formal public comment period, Zucker said.

The state is likely to open the plans to public comment after the documents are issued, Zucker added. That could lead to the state labor department later releasing amended plans.

Bologna expects the state’s enforcement of the law will be driven by worker complaints, and not the department doing compliance spot checks.

According to the law, once a worker raises implementation concerns with the employer, the business has 30 days to resolve the issue. Maugans said he expects most of the complaints will be closed out in those 30 days without going to state court.

If the problems continue, the worker can sue the business to force compliance and recover litigation costs and up to $20,000 in damages.

If the state cites an employer, potential fines range from $50 a day, for failure to adopt a plan, to up to $10,000 for failing to follow the plan.

The law also mandates that as of Nov. 1 employers with 10 or more workers must cooperate with employees who want to set up a safety committee. Each committee would be co-chaired by an employer and a worker representative. Non-supervisory workers must fill at least two-thirds of the seats.

If a business already has a safety committee that meets the law’s requirements, the employer doesn’t have to form a new panel.

The law limits the committee to meeting once every three months for no more than two hours.

The committees can also be a model for how to change workplace practices.

“It’s a great way to demonstrate and build the collective power of workers,” Miller said.

Frank Kerbein, director of the Center for Human Resources at the Business Council of New York State, said he’s concerned the committees could try to get involved in issues employers see as being outside workplace safety concerns, such as changes to shift schedules.

The process of adopting the law was rushed at the same time the state was moving to end its Covid-19 state of emergency, forcing employers to take on new mandates while others were relaxed, Kerbein said.

“This is New York State trying to out-OSHA OSHA,” he said.