Seventeen states have laws that ban vaping and e-cigarettes in the workplace.
Photographer: EVA HAMBACH/AFP/Getty Images

Thousands of employers need to update their workplace no-smoking policies to include bans on vaping and electronic cigarettes as new state laws addressing the practice continue to crop up.

In the past three months, four states—Florida, New Mexico, South Dakota, and most recently Minnesota on May 31—put in place no-vaping mandates for most types of indoor workplaces.

And Wisconsin may be next. A bill proposing to change its no workplace smoking ban to include vaping and e-cigarettes was introduced in the state Legislature in May (S.B. 245).

Across the nation, 17 states have general workplace bans on vaping and e-cigarettes. Most other states have restrictions limited to specific types of workplaces, such as schools, hospitals, and government buildings.

To meet the requirements of the new Minnesota law, employers will likely need to post no-smoking signs that include vaping and e-cigarette warnings and educate workers on the new policy, said Daniel Tranter, environmental health supervisor for the state Department of Health.

In restaurants, stores, sports arenas, and other workplaces open to the public, employers will have to ensure customers don’t violate the law, Tranter said. 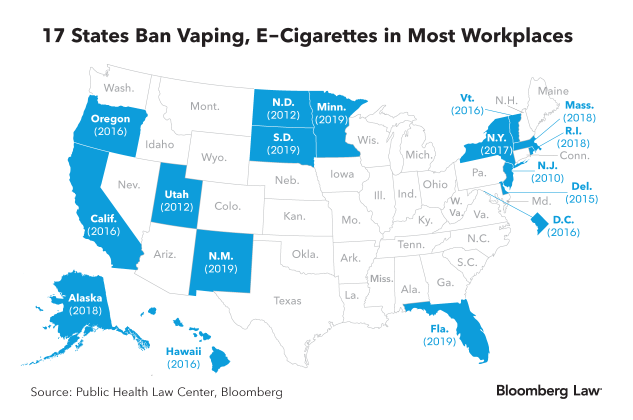 Health departments and license inspectors will have the primary responsibility for enforcing the Minnesota law once it takes effect—likely on Aug. 1, he said.

Health department inspections are usually prompted by worker or customer complaints, Tranter said. Licensing agencies, like those policing liquor laws, will include no-vaping compliance as part of regular inspections, he said.

A first offense should usually result in a warning and no fine, Tranter said. If a second inspection finds repeat problems, he said, employers could face fines of up to $10,000, depending on the severity of the violation.

Spurring the state law changes have been campaigns and lobbying efforts by health groups that view vaping as a questionable alternative for adults to smoking tobacco and an attractive vice for teenagers.

Use among teenagers is of high concern because of the Surgeon General’s Office’s 2016 conclusion that exposure to nicotine in vaping fluids during adolescence can cause addiction and can harm the developing adolescent brain.

Alex Clark, chief executive officer of the pro-vaping advocacy group Consumer Advocates for Smoke-Free Alternatives Association in Washington, D.C., disagrees with the state mandates. He said the association, after hearing from workers and customers who use e-cigarettes, would prefer that employers be able to develop their own policies.

People often use e-cigarettes as way to wean themselves off tobacco, he said.

The CDC’s 2018 report also cited that approach. It said that “e-cigarettes have the potential to benefit adult smokers if used as a complete substitute for combustible tobacco smoking.”

Joelle Lester, an attorney and director of commercial tobacco control at the Mitchell Hamline School of Law’s Public Health Law Center in St. Paul, Minn., said private employers don’t need to wait for state or local laws to ban vaping. They can enact their own policies.

“There is no right to vape,” Lester said.