A jar of marijuana is displayed at a medical and recreational marijuana dispensary in California.
Photographer: FREDERIC J. BROWN/AFP via Getty Images

At issue is whether employers in states legalizing the recreational or medical use of marijuana can ban workers in “safety-sensitive” positions from off-hour use of marijuana or consumption of foods and drinks containing the plant’s psychoactive chemical, tetrahydrocannabinol (THC).

The safety-sensitive classification should include occupations where a mistake can threaten the life and health of others, safety experts say.

“The National Safety Council believes safety is being left out of the conversation, in general,” said , the council’s vice president of government affairs. The council in October issued a policy statement declaring “there is no level of cannabis use that is safe or acceptable for employees who work in safety-sensitive positions.”

The recreational use of marijuana has been approved in the District of Columbia and in 11 states, including California, Michigan, and most recently Illinois. Another 22 states allow only medical use of cannabis. 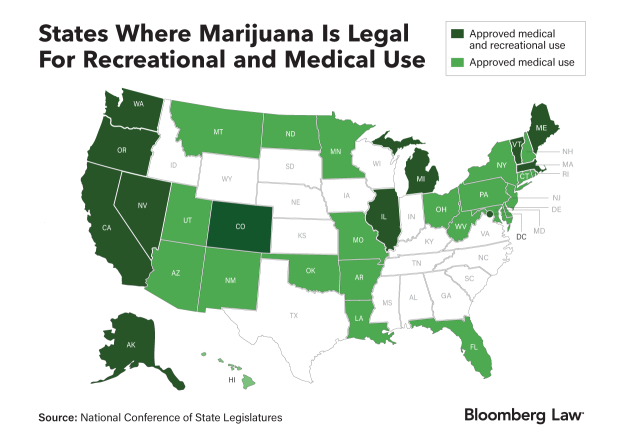 Off-Hours Out of Bounds?

While the laws generally ban on-site use of cannabis or workers using marijuana while on-call, it’s often not clear where the line is drawn for off-hours use.

Dr. Natalie Hartenbaum, a past president of the American College of Occupational and Environmental Medicine (ACOEM) who helped draft the group’s recent marijuana position statement, said a challenge for employers is that there isn’t a scientific or legally accepted method to determine whether a worker was impaired because of off-hours marijuana use.

There are reliable impairment tests that also indicate when alcohol was consumed, Hartenbaum said.

The safest option for employers is to ban any marijuana use by workers in safety-sensitive jobs, Hartenbaum said, since an employer can’t determine when a worker in a safety-sensitive position used marijuana and the degree of on-the-job impairment.

Employers should be able to determine what positions are “safety sensitive,” safety organizations say.

Federal law already declares that truck drivers, rail workers, and airline crews are subject to drug testing and discipline for positive tests. However, industries outside of transportation are largely left on their own to decide what’s safety sensitive or follow state laws if limits are set.

ACOEM’s position is that employers can use criteria that include whether impairment increases risks to other workers, the public, or property.

Safety-sensitive positions include jobs that involve the use of guns, responding to emergencies, making decisions that have an immediate impact on the life and health of others, or raise the likelihood of a pollution incident, ACOEM says.

Ariel Cohen, a Squire Patton Boggs attorney in Columbus, Ohio, who focuses on the implications of marijuana use in the workplace, said personnel operating vehicles, machines, and power tools can be classified as holding safety-sensitive jobs.

Maintaining and monitoring machinery where a malfunction could lead to an injury or property damage also qualifies as safety-sensitive, Cohen said.

For instance, Minnesota defines a safety-sensitive position as a job in which impairment caused by drug or alcohol use would threaten the health and safety of any person, Mora said.

The quandary employers face in determining how far their drug use policies can go was highlighted in recent changes to Illinois’ new law legalizing recreational use of cannabis. The original bill was signed into law June 15 with an effective date of Jan. 1.

The bill’s sponsor, Sen. (D), said the intention always has been to allow employers to restrict workers’ use of recreational marijuana, even at home.

“We think the law is very clear, that it allows an employer to maintain a zero-tolerance policy,” Steans said.

But safety groups and some employer-side attorneys said the original bill limited an employer’s ability to keep workplaces safe because it prohibited employers from banning the off-hours use of cannabis and testing for compliance.

“It is an employer’s responsibility to provide safe workplaces for their employees,” declared a Nov. 5 letter to state officials from the National Safety Council, ACOEM, and the American Industrial Hygiene Association.

Responding to those concerns, on Nov. 14, the Illinois legislature approved a bill (S.B. 1557) with revisions to the law that employers believe resolved the issue, attorney , chair of Ogletree Deakins PC’s workplace safety practice group, said in Milwaukee.

The approved actions include “subjecting an employee or applicant to reasonable drug and alcohol testing, reasonable and nondiscriminatory random drug testing, and discipline, termination of employment, or withdrawal of a job offer due to a failure of a drug test.”

While the law doesn’t specifically reference safety-sensitive jobs, Hobbs said two references should allow employers to hold employees in such jobs to a higher standard and to determine which positions qualify as safety sensitive.

The first appears in the new bill and refers to a “reasonable workplace drug policy.” The second appears in old and new versions of the legislation and says “nothing in the Act shall prohibit an employer from adopting reasonable zero tolerance or drug free workplace policies.”

If the federal government were to remove marijuana from its list of controlled substances, there should be provisions ensuring employers could continue to test workers for compliance with bans, ACOEM’s Hartenbaum said.

OSHA rules don’t address drug testing for impairment other than requiring that if workers are tested, the evaluation can’t be in retaliation for reporting a problem.

The agency declined to discuss its policies on safety hazards created by marijuana use. An OSHA spokesperson said all employers are required by a law, the general duty clause, “to provide a workplace free of recognized hazards.”

Hobbs said the law leaves open the possibility that after OSHA investigates an accident where the employer had reason to believe substance abuse among its employees was a problem, the agency could cite the employer for a general duty clause violation.

In Congress, companion bills have been introduced in the House and Senate to legalize marijuana by no longer classifying it as a regulated drug (H.R. 3884, S. 2227). Neither bill addresses whether most employers would be able to prohibit workers from using cannabis.