OSHA, the federal government’s primary worker safety agency, wrote off nearly $100 million in fines as uncollectible in the past three fiscal years, according to data obtained by Bloomberg Law.

The rate of outstanding debt—about 20% of cited employers don’t pay up—comes at the same time the Occupational Safety and Health Administration has been under fire for imposing penalties that are too low for the cited violations, and for failing to take specific action to protect workers during the coronavirus pandemic. Criticism has been leveled by unions, Democratic lawmakers, and even President Secretary of Labor, .

For a penalty to be effective, there needs to be the expectation that it has to be paid, said John Mendeloff, a professor at the University of Pittsburgh’s Graduate School of Public and International Affairs, who has been involved in numerous studies of the effectiveness of safety enforcement.

“Penalties don’t make a difference, if you’re not going to pay,” he said in a phone interview.

In response to the thousands of businesses not paying penalties and suffering no consequences, this year OSHA will start targeting the bad debt employers with follow-up inspections. It also recently began making more attempts to collect the fines.

During fiscal years 2018-2020, the safety agency had annually closed out an average of 4,600 cases after attempts to collect fines—some as old as three years—failed, according to data obtained pursuant to Freedom of Information Act requests. That figure represents about 20% of the business cited by OSHA for those years.

The three years prior, fiscal years 2015-2017, OSHA closed out an average of 1,834 cases annually for nonpayment, with uncollected fines for the three years totaling $23.45 million.

Agency officials speaking on background and former OSHA officials said there are several reasons for the jump in bad debt cases—from small employers calculating they can avoid paying fines by changing identities to a Treasury Department software change that led to collection notices going unmailed.

“Unfortunately, the agency faces a challenge in finding some employers, especially smaller or mobile employers, who owe penalties to the Treasury,” said former OSHA administrator Loren Sweatt, who left at the end of the Trump administration.

The new enforcement and collection efforts were initiated in the final weeks of the Trump administration. During a Jan. 11 speech to Department of Labor attorneys, then-Labor Secretary Scalia bemoaned OSHA’s collection efforts

“Collecting penalties owed the government is an essential last step in a successful enforcement program—fail to take that step, and it’s as if your other efforts were virtually for naught,” Scalia said.

The difficulties with finding employers were compounded by problems with the Treasury Department’s collections efforts on behalf of OSHA, current OSHA officials speaking on background said.

After an employer stops contesting an inspection’s violations and penalties, it’s supposed to pay the fine within 120 days.

Under the agency’s new collection initiative, OSHA headquarters will produce monthly a list of employers who haven’t paid fines on time and distribute the list to area offices. The bad debt cases will be added to lists of employers to be inspected as part of emphasis programs—such as preventing construction falls—or on a separate list if none of the emphasis programs apply to the employer. 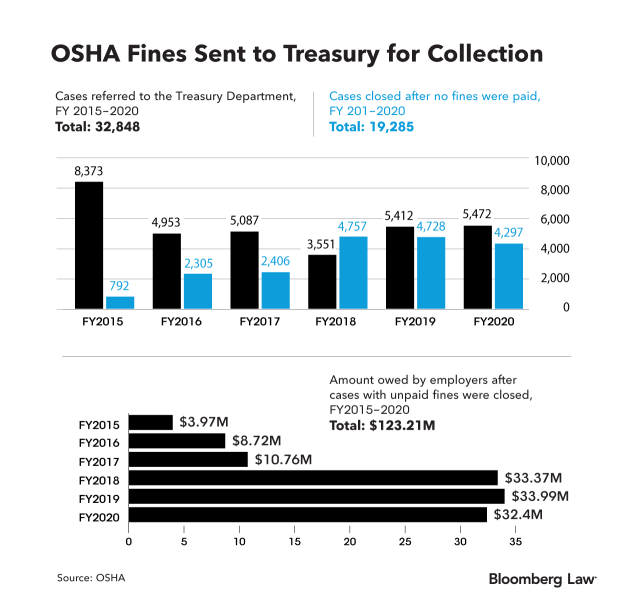 Under prior safety agency policy, demand letters were sent 30 and 60 days after the inspection results became final. Under the new regime, OSHA will also send a letter at the one-week milestone and telephone the employer after two weeks have passed.

Tom Galassi, who led OSHA’s enforcement directorate until retiring in 2018, said OSHA considered a similar follow-up inspection effort in 2013 and 2014, but the idea was set aside when the agency had to cope with Congressional budgets cuts that reduced the number of OSHA inspectors.

Most of the delinquent companies are small employers, often construction contractors, who can easily change names or business addresses, Galassi said.

“We call them scofflaws,” Galassi said. “They don’t really have a commitment to the community in terms of having a brick and mortar location. They appear and disappear.”

An employer who skips out on paying a fine, isn’t likely to be following worker safety rules. “Not only do they not care about the penalty, they don’t care about the violation,” he said.

If OSHA hasn’t been able to collect a fine within 120 days, the bad debt case is forwarded to the Treasury Department.

The Treasury has about two years to collect the fines, often using letters and telephone calls. In accordance with federal debt collection guidelines, if the debt isn’t collected within about two years, OSHA is notified of the unpaid debt and the inspection case is usually closed.

In rare circumstances, OSHA may ask Treasury and the Department of Justice to file a federal debt collection lawsuit against an employer, often if a large fine is at stake or a local OSHA office believes a business can be found.

Until fiscal year 2018, that collection system for the most part seems to have worked. In fiscal 2017, 2,406 cases were closed after nonpayment and the total amount written off was $10.76 million.

Then in fiscal 2018, the Treasury’s Bureau of the Fiscal Service began using new software and the collection process broke down, according to a report from the Treasury’s Office of Inspector General.

“We found that Fiscal Service did not take action to process $91.5 million in transferred OSHA debts because of a software problem,” the watchdog report concluded.

A related investigation by the Department of Labor’s inspector general said OSHA contributed to the debt collection woes by often not forwarding collection requests until more than 180 days after debt became due, not 120 days.

The problem was that the debtors’ addresses were placed in the wrong box on an electronic form, leaving the address box blank. Without an address to mail a collection letter to, the collection effort didn’t start.

At least one fiscal service employee reported the problem by filing a request ticket to resolve the malfunction in January 2018. Three more requests by others were made through May 2018 to fix the problem. However, Treasury didn’t resolve the software problem until after the inspector general began its inquiry in September 2019, the report said.

Treasury’s inspector general didn’t fault any individuals by name, but did conclude, “The fact that these tickets were unresolved without a timeline for resolution confirms mismanagement and impacts the government’s ability to collect on these debts.”

OSHA officials speaking on background said that with Treasury issues resolved they hope collection numbers improve in 2021, however it still remains to be seen if business problems brought on by the pandemic will lead to more cited employers closing or deciding not pay.

Collection of outstanding fines is only a partial solution to the agency’s enforcement problems.

Democratic lawmakers have been especially critical of OSHA for not seeking larger fines for companies where Covid-19 related violations were cited.

“The citations and fines were wholly inadequate and may even create incentives for employers to make these workers work faster and harder in the most unsafe working conditions imaginable,” 22 Democratic senators wrote to Scalia shortly after OSHA began citing health-care operators and meatpacking companies.

And, in a study published last May by the journal Regulation and Governance covering OSHA inspections of manufacturing plants, researchers found that when the agency issued a penalty below $20,000, the fine didn’t lead to safer practices, Pitt’s Mendeloff said. But after a fine above $20,000 was proposed, inspectors found improvements.