Nearly half of all employers cited by the Occupational Safety and Health Administration for Covid-19-related violations are appealing the charges, a rate that is five times higher than the average for all federal workplace safety citations.

As of April 15, employers had filed 172 appeals of virus citations with the Occupational Safety and Health Review Commission, the panel that hears challenges to OSHA citations, according to commission data. That represents about 42% of the 408 Covid-19 cases where OSHA said it cited workplaces from July 1, 2020 through April 12, 2021.

Typically, only about 8% of employers cited by OSHA have challenged the allegations by appealing to the review commission, prior-year data show. That trend has continued during the pandemic. Since July, when OSHA began issuing citations in Covid-19 inspections, only about 8% of employers cited for all types of violations—virus-related or otherwise—have contested the charges, according to OSHA data.

The sharp increase for virus citations reveals that many employers are motivated by a belief that their safety efforts complied with often-changing OSHA requirements, and some are concerned that not defending themselves against a citation could lead to civil lawsuits and damaged reputations, attorneys who often represent employers said.

“It’s been an extraordinarily difficult time for safety and health professionals and for human resources people around the country,” said , a shareholder with Ogletree Deakins in Washington, D.C. “Many of them justifiably feel they’ve done good work under very trying circumstances.”

About 85% of the contested virus-related cases involve health-care facilities, according to OSHA enforcement data. That’s in line with OSHA’s decision at the start of the pandemic to focus most of its Covid-19 inspections on the health-care industry.

Food processing facilities such as meatpacking plants, where outbreaks have been common, represent about 5% of the appeals. 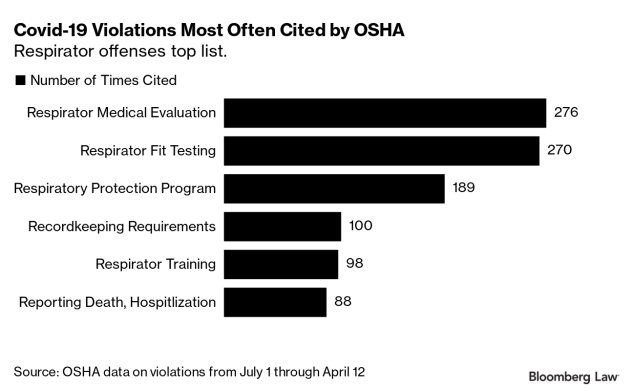 OSHA enforcement records through April 12 show the agency had issued citations for at least 1,150 violations related to Covid-19. About 80% involved alleged violations of OSHA respiratory protection rules, such as not conducting fit-testing of N95 respirator masks or not training workers to use them.

Another 17% were recordkeeping violations, such as not listing a work-related illness or death in logs OSHA requires employers to accurately complete. Less than 1% of the violations were for not following the general duty clause, a provision in the Occupational Safety and Health Act that requires employers to provide a workplace free of known and preventable deadly hazards.

The average proposed total fine for each cited employer was $12,891.

Among the reasons for the high percentage of appeals is a concern that agreeing to a violation and paying the fine could leave an employer vulnerable to negligence or other tort claims, said , a former review commission chairman and now a partner with Fisher & Phillips in Atlanta.

A denial may enable a worker or their survivors to sue the employer, Foulke said, and a lawsuit against an employer could have more weight if the employee’s attorney can tell a court that the company didn’t challenge an OSHA Covid-19 citation.

, co-chair of Cozen O’Connor’s workplace safety practice in Washington, D.C., and a former commission chairman, said employers may want to challenge OSHA assertions about where employees were infected, because it’s often hard to prove where a person contracted the virus.

This could be an issue in cases where OSHA cited employers for not including Covid-19 illnesses or deaths in their OSHA-mandated records of on-the-job infections or for not quickly notifying the agency of a worker’s death or hospitalization when the virus was believed to have been contracted at work.

“The burden of proof is on OSHA to show that it is work-related,” Sullivan said.

If an employer performed “a good faith investigation” and couldn’t determine if an infection was work-related, Bailey said, the employer wouldn’t be required to record it and thus OSHA shouldn’t cite them for that decision.

Defending against potential damage to a company’s reputation may also be motivating employer appeals.

Companies don’t want to be seen as accepting OSHA’s conclusion that they violated federal rules for protecting workers against Covid-19, Sullivan said.

Even internally, a company’s reputation among its staff could be damaged by not defending its decisions and safety programs, Bailey said.

According to the review commission, 47 of the Covid-19 appeals have been set for a hearing before an administrative law judge. The outcome of those appeals could take months and in some cases years, Sullivan said.

Generally, an employer may first try to reach a settlement by negotiating with Department of Labor attorneys and regional OSHA officials, Sullivan noted.

If a settlement can’t be reached, the appeal would be decided by one of the commission’s administrative law judges. In turn, that decision could be considered by the review commission’s three members. If either side objects to the commission’s final order, it can be appealed to federal circuit courts.