The rise of the omicron Covid-19 variant has led to a threefold increase in worker complaints and referrals to OSHA from other agencies.

Those increases come at the same time the U.S. Supreme Court on Jan. 13 halted enforcement of the Occupational Safety and Health Administration’s shot-or-test mandate for large employers and the agency’s Dec. 27 withdrawal of its health-care Covid-19 emergency temporary standard. The surge of Covid-19 infections and the lack of virus-specific rules to prevent infections has led to calls for OSHA to boost enforcement using other laws and standards and to reinstate the health-care measure.

Retail and grocery stores accounted for 133 of January’s caseload, and there were 115 complaints about health-care facilities. Concerns about restaurants led to 81 filings with OSHA.

The complaint and referral increase is also similar to what OSHA experienced in summer 2021 when the delta variant was sweeping the country. During the first week of August, OSHA received 109 complaints and referrals, more than a fivefold increase over the 16 filed during the week ending June 20.

Complaints to OSHA peaked in summer 2020, when the agency was taking in an average of about 310 complaints a week. 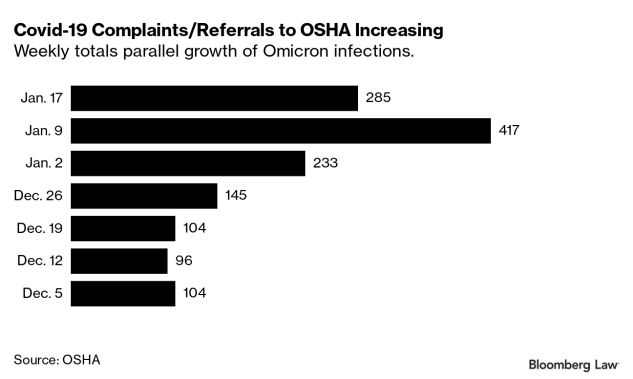 Inspections have increased at a slower pace, in part due to the Christmas and New Year’s Day holidays when inspections were less frequent.

OSHA averaged about 23 Covid-related inspections weekly in first three weeks of December, according to agency numbers. But since the start of January, the agency has opened 73 inspections, with 50 taking place from Jan. 10-17.

“Employers are not keeping workers safe and the complaint activity you cited shows that workers are calling on the government, on OSHA, to help them,” said Rebecca Reindel, director of safety and health for the AFL-CIO labor federation. “They need their employers to provide mitigation measures, which are key to preventing spread of the virus.”

OSHA declined an interview request to discuss the agency’s response to omicron and how the variant had affected the agency’s ability to conduct in-person inspections of work sites. Agency officials did provide a written response.

“OSHA has conducted inspections throughout the pandemic and will continue to use on-site Covid-19 inspections, in most cases, and remote methods as needed to reduce potential exposure to compliance safety officers and workers,” the agency’s statement said. “Our goal is to investigate every complaint we receive, and this enforcement approach ensures that we are using every available tool to address unsafe workplaces.”