As states start lifting their lockdown orders, America’s burger joints, pizzerias, taquerias and diners find themselves on the reopening economy’s front line. Whether they’re ready or not.

Restaurants are among the first businesses allowed to throw open their doors in many places easing virus-fighting restrictions. And after weeks of laying off staff and living off takeout orders, owners can’t wait -- even if they’re not quite sure how to make it work.

Cutting the number of seated customers by half or more, as some states are requiring, will devastate finances already in terrible shape. Servers in masks don’t make for an inviting atmosphere. Forget salt-and-pepper shakers on the tables. One restaurant in Iowa plans to start dine-in service by seating only truckers, because they tend to eat alone.

In Texas, the biggest of the mostly southern states leading the way, the Mexican restaurant Hugo’s is waiting until after Cinco de Mayo -- an occasion not made for social distancing. “That’s a pretty raucous time,” said Tracy Vaught, who owns the establishment and three others in the Houston area with her husband, award-winning chef Hugo Ortega. “I was worried about opening up and us not being very experienced with the new protocols.” 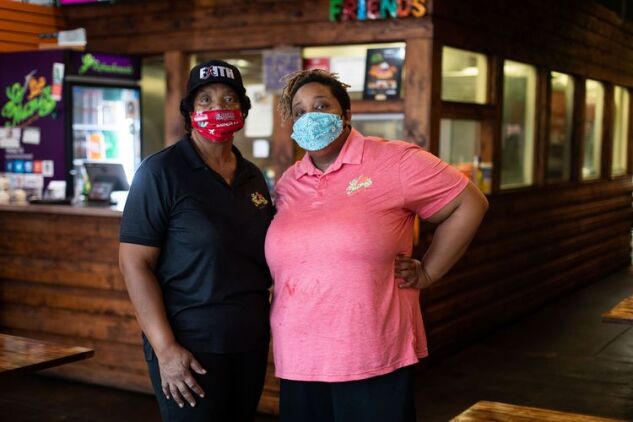 Major restaurant chains are making adjustments as well. is getting rid of condiments like its signature syrup containers on tables as IHOP locations begin opening. Its Applebee’s restaurants have also nixed shared condiments like ketchup, Chief Executive Officer said in an interview.

Plastic plates and forks, knives and spoons are available if customers want those instead of porcelain plates and silverware. Kitchens are opening with fewer staff members, allowing for social distancing, he said.

“We’ve got team members that are probably a little nervous about coming back, and we want them to know we’re doing everything we can to keep them safe,” Joyce said. “And this will be a gradual reopening process. It gives us time to make sure we’re getting this right.”

is 6 to 8 feet apart in its Chili’s restaurants that are allowed to reopen, executives said on its earnings call Wednesday. They said the chain’s “fairly large” dining rooms give them an advantage. Workers will be wearing masks and gloves, and there will be a table at each restaurant’s entryway stocked with hand sanitizer and paper towels for guests.

But patrons won’t be allowed to sit at Chili’s iconic margarita bars -- it’s too hard to do social distancing there, the company says.

While plans to reopen most of its U.S. stores next week, they will just be for drive-thru, delivery and pickup orders. Even in states like Texas that will allow sit-down service, Starbucks’s dining areas will remain closed, a company spokesperson said.

With coronavirus deaths still rising in many places, restaurateurs worry about safety for their customers and their staff -- which often includes their family. They plan in fear that the virus could strike their own kitchens, or that another infection spike in the larger community could force them to shut down all over again.

“I don’t want to open prematurely and, two weeks later, they’ll say, ‘Oh no, we have to close again,’” said Crystal Peterson, who owns Yo’ Mama’s in Birmingham, Alabama, with her mother. 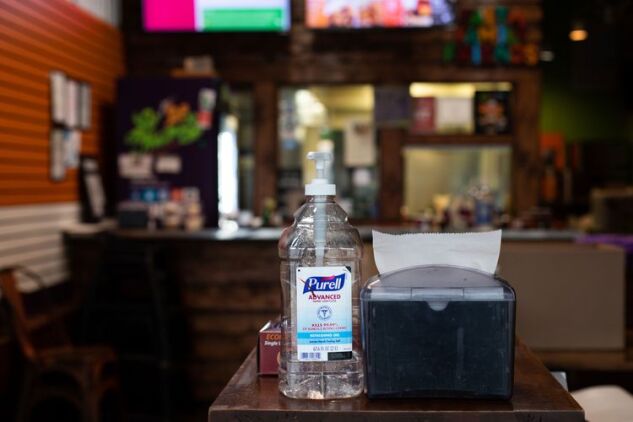 Hand sanitizer for customers use at Yo’ Mama’s restaurant in Birmingham.
Photographer: Maranie Staab/Bloomberg

For now, Alabama is limiting restaurants to takeout and curbside service. That works for Peterson, who is concerned about protecting her staff and her 63-year-old mother, Denise, typically found grilling burgers, catfish and pork chops.

“When we come back, we’re only going to use paper products for the first 60 days,” Peterson said. “Everything will be disposable.”

The coronavirus lockdown has devastated American restaurants, which employ 15.6 million people, according to the .

“One word to describe the impact is ‘catastrophic,’” said Emily Williams Knight, CEO of the Texas Restaurant Association. The industry “went off a cliff the day our dining rooms were closed across the state,” she said. Her association estimates that 10% of Texas restaurants will have shuttered permanently by the end of April. 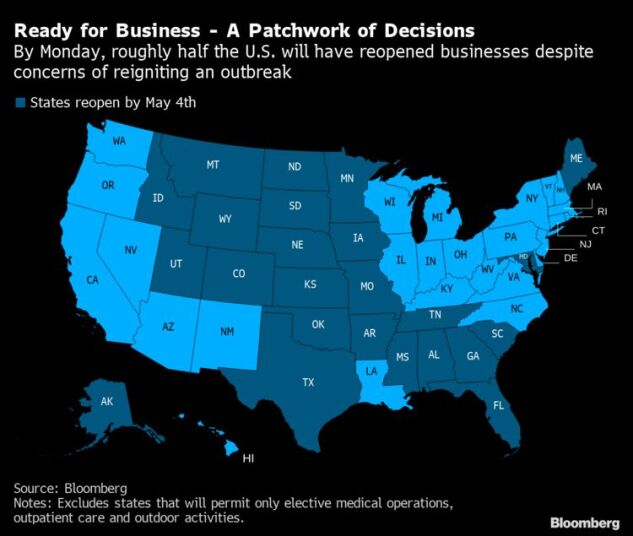 The County Line, which has served barbecue to Austin residents since 1975, started getting calls for reservations the day after Texas Governor Greg Abbott announced restaurants, retailers and other businesses could open on a limited basis this Friday, said owner Skeeter Miller.

“It’s going to be so busy it’s unbelievable,” said Miller, which has five County Lines in Texas and one in New Mexico. “People just want to get out.”

Miller was able to keep 150 of his 500 employees by offering orders to go and selling fresh grocery items, including eggs, flour and frozen meat, after Texas relaxed the usual retail restrictions on those items. Still, he’s at only about 30% of his normal revenue.

Miller and his team have already devised a plan to keep patrons six feet apart, use disposable menus, keep condiments off the tables and sanitize after folks leave. Staff will be wearing masks, and guidelines for customers to follow will be posted at the front door. If the restaurants reach the 25% capacity limit, there’s room outside for people to wait, sip a margarita and stay apart, he said. Miller’s paring his menu a bit, but barbecue ribs and peach cobbler will be on there.

The gradual opening is the responsible thing to do, Miller said.

“This 25% opening up is good,” Miller said. “We felt like that if you tried to open this thing up all at one time, you’d see a spike in the Covid, and the next thing you know they’re going to shut us down again.”

Even if it’s better than takeout alone, restaurants may struggle to make ends meet with drastically reduced seating.

“A restaurant that’s designed for a certain size can’t make money at 25%” capacity, said Niel Morgan, owner Legacy Restaurants, which owns and operates The Original Ninfa’s on Navigation in Houston. “A number of expenses go on whether you’re open or not. Just looking at it marginally, which is mainly labor costs, as long as we can at least break even we’re satisfied.”

In northern Iowa, restaurant owner Amanda Weig says she’s looking forward to welcoming her customers and employees back. But even though her county will let restaurants reopen on Friday, she’s going to wait a few weeks.

Resuming service in her 120-person eatery in Algona, a town of 5,500 people, isn’t safe right now because she and her husband won’t be able to ensure that diners are following social-distancing guidelines. When they do eventually open their doors to dine-in customers, only truckers will be allowed in first, she said. It will be easier to spread them apart because they often eat alone or with just one other person, she added.

“We can’t police our customers,” said Weig, who has been offering takeout service at her Chrome Restaurant and Catering during the shutdowns. “Following guidelines is going to be very new for customers at the beginning, so we’d rather wait until they get it right.”

Christy Hackinson, the owner of The Alley on Main in Murfreesboro, Tennessee, plans to seat every other table when she opens the dining room back up on Friday, and she expects all those tables will be full.

Tennessee’s governor said restaurants in most counties could reopen earlier this week with restrictions. Just a half-hour or so drive from Nashville, The Alley on Main has been serving customers outside -- on picnic tables spaced 6-feet apart -- with waiters wearing gloves (and masks upon customer request).

The restaurant will take phone numbers of those waiting in line, so customers can sit in their cars until their table is ready or stand in one of the many chalk-drawn squares on the sidewalk meant to encourage distancing. 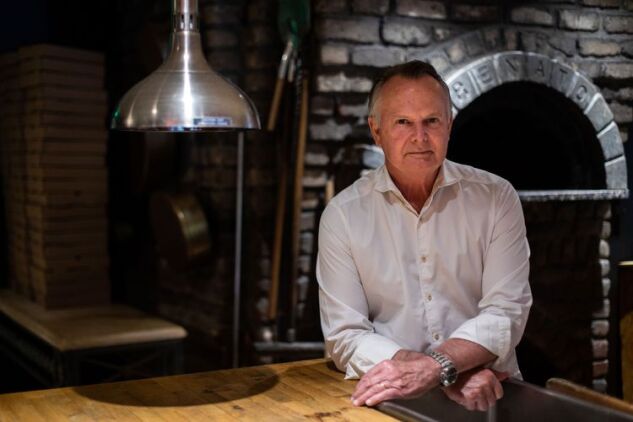 Frank Stitt, an award-winning chef who operates four restaurants in Birmingham with his wife, Pardis, is planning to open on Thursday after being shut down since March. Out of 150 employees, all but 15 have been furloughed. The remaining crew will start serving food curbside at his Bottega Restaurant and Cafe in the city’s Southside neighborhood.

“We don’t want to open up and for our staff to become sick,” he said. “We have to be very cautious. So we decided to do curbside. We were able to develop protocols and systems.”

The staff must wear masks and gloves and stay 6 feet apart. “There are disinfectants everywhere,” he said. “My wife is extremely tough on these protocols.” They will also suggest customers don masks when they pick up the food. “As you know there are still people not wearing masks,” Stitt said. “We think it’s a mistake.”

Eventually Stitt, whose Highlands Bar & Grill won the 2018 James Beard , hopes to be able to use the patios outside of Bottega and his bistro Chez Fonfon as an outdoors sit-down dining option.

“We are solution-finders,” he said. “We try to be creative. To make things work as a chef, you want to be frugal and be able to utilize everything you can.”