The inside of a Tesla vehicle is viewed as it sits parked in a new Tesla showroom and service center in Red Hook, Brooklyn on July 5, 2016 in New York City.
Photographer: Spencer Platt/Getty Images)

The federal regulator charged with keeping U.S. roads safe is now in its fourth year without a permanent administrator, and President hasn’t nominated anyone as the agency undertakes a politically fraught investigation of Tesla Inc.

The absence of a Senate-confirmed leader could complicate the ’s effort to craft rules for a surge of driver-assistance technologies and other automotive features -- some of which have been linked to deadly accidents.

The agency last month announced it was undertaking a formal investigation into ’s Autopilot system after almost a dozen collisions at crash scenes involving first-responder vehicles, stepping up scrutiny of a system safety groups had been complaining about for years.

Safety experts say its time for permanent leadership at the agency. 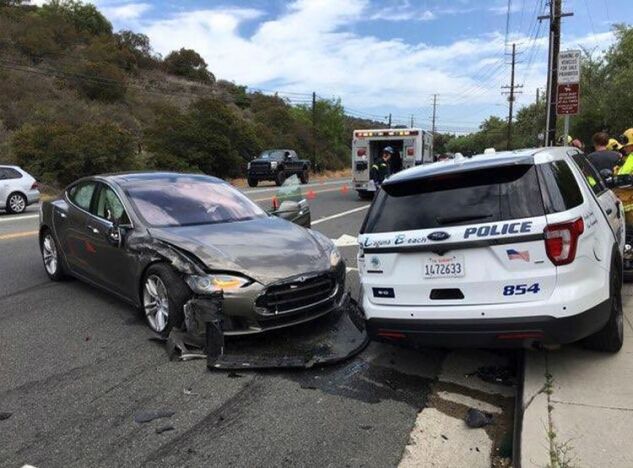 “NHTSA needs every advantage it can get when taking on the very powerful and influential auto industry and a Senate confirmed Administrator who can bring to bear all of the tools of the agency on behalf of consumers can be critical,” , executive director of Center for Auto Safety, said in an email.

Long-time observers and former chiefs of the agency say they know of no controversy holding up a nomination but attribute it to the ordinary delays in setting up a new administration.

“Senate-confirmed appointments in the modal agencies take time,” said NHTSA Administrator , the last confirmed NHTSA administrator who served from 2014-2017 under President . “They aren’t going to all happen in six months.”

Meanwhile, traffic deaths have skyrocketed. NHTSA estimates released this month show that 8,730 people died in motor vehicle traffic crashes in the first three months of 2021, a 10.5% increase from the first quarter of last year.

The White House and NHTSA did not respond to requests for comment on the status of filling the job.

“A Senate-confirmed administrator has a stamp of approval from the executive branch and Congress,” Rosekind said.

NHTSA is one of seven agencies under the umbrella that are headed by administrators subject to Senate confirmation. Five of those seven DOT sub-agencies are currently being led by deputy or acting administrators that were appointed by Biden when he took office in January. That includes NHTSA, which has been led since then by Steven Cliff, a former deputy executive officer at the California Air Resources Board, which regulates auto emissions in the Golden State.

A sixth agency, the , is being led by , who was appointed to a five-year term by then President in 2019 and was confirmed by the Senate.

NHTSA has been more activist under Biden, even with an acting administrator. The agency has opened 26 probes into various auto-safety issues so far this year -- more than in all of 2020 or 2019, according to its website. It is on pace to commence about 66% more investigations than the 25 it began last year.

One of those probes is into Tesla’s driver-assist system, covering an estimated 765,000 Tesla Model Y, X, S and 3 vehicles from the 2014 model year onward. The regulator -- which has the power to deem cars defective and order recalls -- said it launched the investigation after 11 crashes that resulted in 17 injuries and one fatality.

NHTSA has at least 10 pending regulations that are overdue to be finalized based on laws that were approved by Congress, according to a list compiled by Advocates for Highway and Auto Safety. Among them are rules involving motorcoach rollover structural integrity and anti-ejection countermeasures and side impact requirements for child restraint systems that were all due in 2014. Other pending regulations include new rules regarding rear seat belt reminders, due in 2015 and notification of vehicle safety recalls via email, due in 2016.

, who served as administrator of NHTSA for four years during the Carter administration, said that her quick confirmation allowed her to tackle major issues early on, including issuing an airbag rule and fuel economy standards.

“It does make a difference to get a running start and know what you’re going to be doing, and when the appointments are delayed that’s, I think ,very disaggregating for the agency and for the people who take over,” Claybrook said in an interview.

“Steady leadership at our nation’s top auto safety agency is critical to address rising traffic fatalities and other urgent challenges head-on,” Senator , a Connecticut Democrat, said in a statement.

Federal law prohibits people who have been appointed to fill vacant executive agency positions that normally require presidential appointment with Senate confirmation on a temporary basis from serving longer than 210 days. There is no limit on the ability of deputy administrators to run federal agencies.

Obama did not name his first full-time NHTSA nominee until December of the year he took office. Trump nominated on April 2018 after she had served as acting NHTSA chief for over a year. Her nomination was held up by Democrats who were upset about NHTSA’s handling of Takata air-bag recalls and then she resigned in August 2019.

“There is concern that important regulatory and/or enforcement actions may be delayed resulting in a needless threat to public safety,” said , president of Advocates for Highway and Auto Safety. She said her organization doesn’t endorse particular candidates for to lead Transportation agencies.