This abandoned and unplugged oil well near Bradford, Pa. sits yards from a creek that flows into the Allegheny River.
Photographer: Bobby Magill / Bloomberg Law

Cheryl Thomas stood in the woods near her northwestern Pennsylvania home on a rainy afternoon in June, watching black crude drip from an abandoned oil well just steps from a creek leading to the Allegheny River.

“The wet season, it flows like this all the time,” Thomas said.

She and her husband have counted about 60 derelict oil wells on their land east of Bradford, where companies began drilling one of America’s first oil fields in 1871.

The couple live with that legacy daily: Oil and methane have leached into their water supply and they filter water from their kitchen tap. They once emptied a gallon of crude from their hot-water heater; another time, tests found such high methane levels in their water that a state inspector warned them, “Don’t have a leisurely bath with a lit candle and a cigar.” 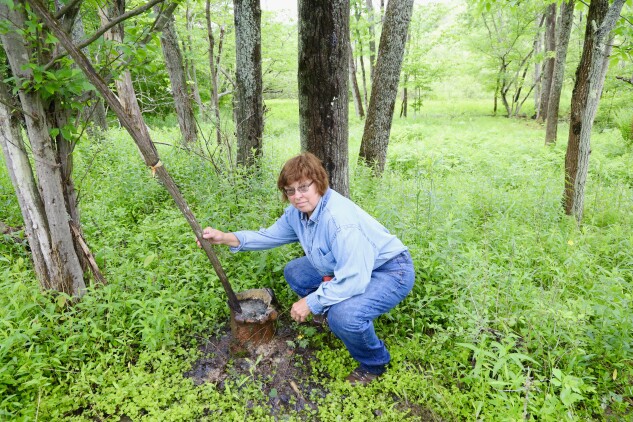 Abandoned wells are often called orphans because they were left behind by drillers before the state started regulating them in the 1950s. Pennsylvania, where the industry was born, has more than any other state—possibly hundreds of thousands.

Congress is spending $4.7 billion from last year’s infrastructure law on a five-year program to clean up orphaned wells, maybe tens of thousands of them. States usually only plug a handful each year, and they’re hoping the cash will kick-start the cleanup when the money begins flowing this fall.

“It really is an opportunity to rewrite Pennsylvania’s oil and gas well legacy,” said Kurt Klapkowski, an acting deputy secretary in the state’s Department of Environmental Protection.

But the infrastructure law funding only scratches the surface of the orphan well problem. Billions more will be needed to plug all the nation’s forgotten wells. Nobody knows exactly how much—because nobody knows how many exist.

States have records for about 131,000 orphan wells, mostly concentrated in Pennsylvania, Ohio and Oklahoma. The Interior Department estimates at least 3.5 million nationwide, but “the total scope of the problem is unknown,” spokesman John Grandy said.

Their effects are clear: The gas and oil they leak contribute to climate change, threaten homes, and are routinely blamed for water contamination. Critics worry about the pace of the cleanup.

West Virginia says its $25 million federal grant will pay to plug 160 orphaned wells, barely 1% of the roughly 15,000 abandoned wells statewide. At that rate, it would take more than 95 years to plug them all, a state spokesperson said.

The wells leak deadly hydrogen sulfide gas, and take roughly the same annual toll on the climate as all the fossil fuel-fired electric power plants in Mississippi, according to a 2020 Columbia University study.

States typically don’t track how much water pollution comes from abandoned oil and gas wells. In one analysis, Ohio officials concluded that leaks from orphan wells accounted for nearly a quarter of the 185 incidents of groundwater contamination statewide between 1983 and 2007. 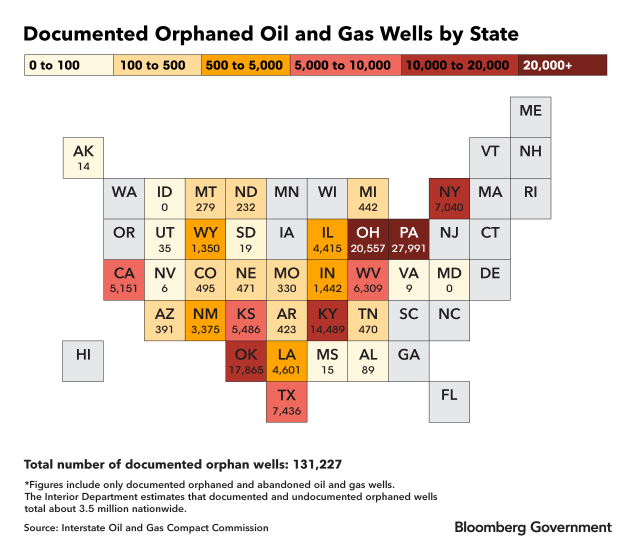 Orphaned wells have been associated with 60 emergencies across Pennsylvania since 2017, including 47 involving gas leaks or remediation, and 13 involving oil contamination, according to state records.

In March, methane began spewing from an abandoned well drilled in Westmoreland County by Modulus Corp. before the company went bankrupt in the 1990s.

The well sat within 500 feet of residences and had been leaking gas since at least 2011. It cost the state $84,000 to clean up what the company left behind, Department of Environmental Protection records show. 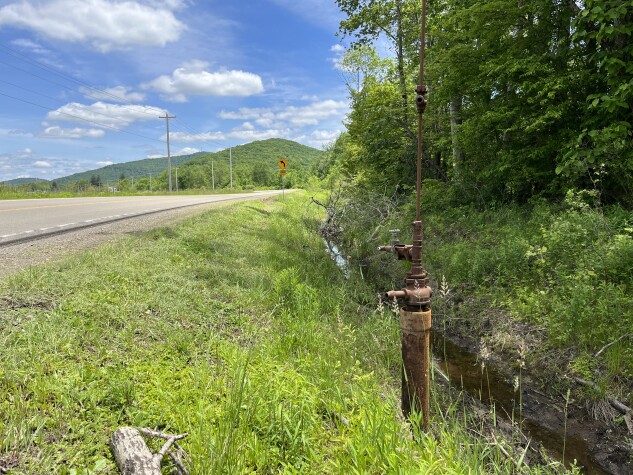 An abandoned oil well on the side of a highway in Cattaraugus County, N.Y.
Photographer: Bobby Magill/Bloomberg Law

Another time, Pennsylvania spent about $179,000 plugging a well it discovered within 10 feet of a home in a densely populated trailer park southwest of Pittsburgh. That bill equaled nearly a quarter of the state’s $841,000 fiscal 2022 budget for plugging orphaned wells.

Inspectors have even found some houses had been built atop long-abandoned wells, Klapkowski told the department’s Citizens’ Advisory Council this spring.

“In some cases, you may not know the well was there,” he said.

With an expected $330 million from the infrastructure law—more than any state but Texas—Pennsylvania hopes its plugging rate will increase from about 20 annually to hundreds, said Harry Wise, the DEP’s well-plugging program chief.

The federal grants for the cleanup are based on states’ Covid-19 pandemic-related job losses, their number of documented orphaned wells and the estimated cost of plugging them.

Pennsylvania has nearly 28,000 documented orphan wells, but the actual number is likely higher. State regulators estimate there could be 400,000; a 2016 Princeton University study said 750,000.

It’s unclear how much it will cost to clean and plug all the state’s derelict wells. Officials put the tab between $2 billion and $13.6 billion.

The Columbia study estimated it would cost the federal government up to $24 billion to find and plug just 500,000 abandoned oil wells. That’s nearly 10 times what it has pledged to give states for cleanup efforts over the next five years. 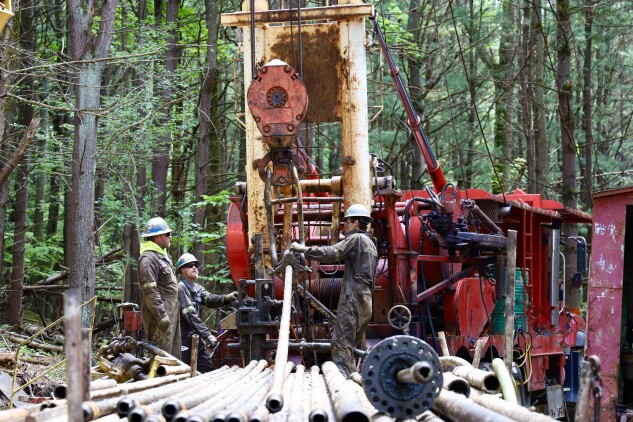 The task of actually plugging the wells falls to contractors like Stephen Plants. Founded in 1970, his family-run Plants & Goodwin Oil and Gas Field Services is among northwest Pennsylvania’s largest well-plugging companies.

One day in early June, Plants, the company president, watched one of his crews work on an abandoned well on a tree-covered hillside in Cattaraugus County, N.Y., just across the state line from Bradford.

The orphan-well problem in New York is not as expansive as in Pennsylvania, but the state estimates it has about 34,000 orphaned wells and is eligible for up to $70 million for remediation.

Like many jobs, this one involved building a temporary road to the derelict well and bringing in a 65-foot tall derrick—on a rig that can weigh 75,000 pounds or more—into environmentally sensitive areas. The rig is designed to re-drill a well, or maintain and replace the casing of an existing well bore to prevent water pollution.

There was no record for this well, which had been plunged more than a quarter-mile into the ground, possibly in the 1930s, Plants said, standing below the rig and a portable oil tank as the smell of crude rolled across the site. After cleaning the well, the crew planned to cement it across all the spots where oil and gas might escape. The whole job was expected to take two weeks—about twice as long as usual.

Plants’ son Luke, the company’s chief operating officer, said he expects plenty of growing pains ahead as demand grows for well-pluggers. Already, at least 158 companies are eligible to bid on infrastructure law-funded plugging contracts in Pennsylvania, state officials say, and 133 companies are registered to bid in New York.

“At least 50% of the work is getting this kind of equipment to where the wells are,” and completing the environmental restoration at the end of the job, Luke Plants said. “We’re often required to fish out a fencepost and other trash that is sometimes hundreds of feet below the surface.”

Because only a few wells have been plugged each year, there isn’t much of an “industry ecosystem” built up, and contractors might not be prepared for the avalanche of business coming their way, he said.

With 70 workers, Plants & Goodwin is one of the region’s biggest and busiest plugging outfits.

“I can’t grow my company fast enough to make that work,” he said. “If I’m already the largest, who else is going to be there to actually accomplish this job?” 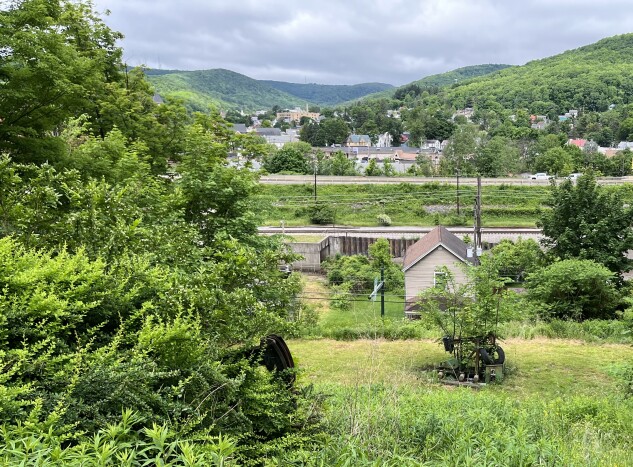 In Ohio, which has nearly 30,000 documented and undocumented orphan wells and will get $25 million, officials worry about the ripple effect from a rush of well-plugging programs.

“If all these states have this pot of money, and they’re taking the same supplies, the supply chain is smaller, the costs go up,” said Eric Vendel, the chief of the state’s Division of Oil and Gas Resources Management.

The state has qualified more than 40 contractors to plug orphaned wells, but that doesn’t mean they’ll take the work. “One of the main struggles with the growth of our program has been to get enough contractor participation over the last four to five years,” said Jason Simmerman, an engineer with Ohio’s orphan well program.

At the same time, the environmental costs of plugging wells, especially in a region with hundreds of thousands of them, present a dilemma for regulators and conservationists worried about climate change and water quality.

“What if the damage you do in plugging the well is greater than the damage you do with the well just sitting around?” said Adam Peltz, a senior attorney at the Environmental Defense Fund who has advocated for Congressional funding for the cleanup. “Not every orphaned well is causing pollution. Some of them, the most sensible thing might be to leave them alone.”

Some also worry that uneven state regulations and enforcement could increase the number of abandoned wells.

Many states require owners to post bonds so they can be held financially responsible after a well stops producing oil and gas. But bonding rules vary by state. 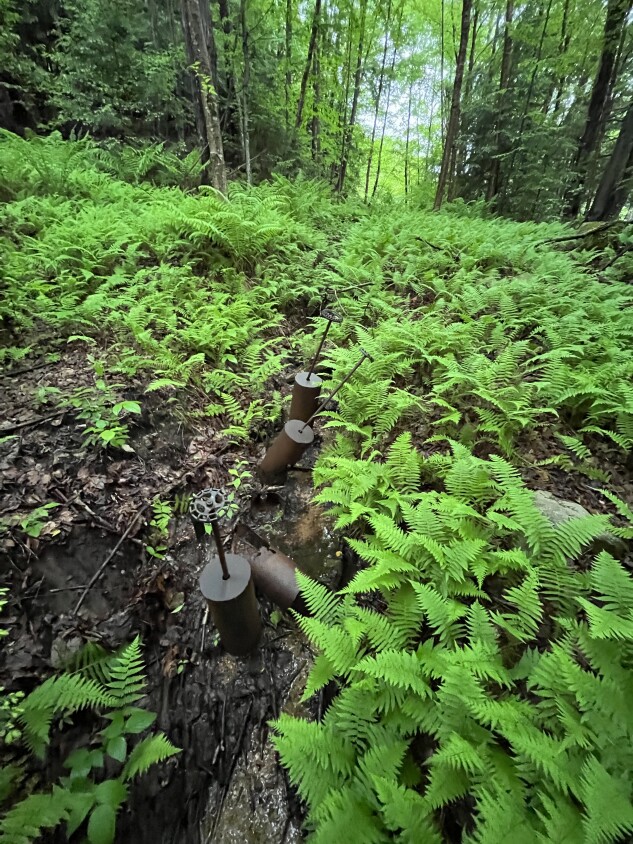 Pennsylvania requires drillers to pay $2,500 for each new well. But the state’s Republican-led legislature this summer approved a law that prohibits state regulators from increasing bonds for most of the state’s roughly 100,000 oil and gas wells that are still actively producing oil but were drilled decades ago.

The measure, which took effect in July without the Democratic governor’s signature, exempts wells drilled before 1985 from bonding requirements, possibly allowing their owners to walk away rather than spending tens of thousands of dollars to plug them.

It “represents a huge liability for Pennsylvania because a lot of those wells are still operating,” said David Hess, a former Pennsylvania secretary of environmental protection. “Abandoning these wells continues to be a pervasive business practice of the conventional oil industry.”

The wells on Thomas’ property near Bradford are scattered in dense thickets of brush that have spread in the decades since they were abandoned. Who drilled many of them, and when, remains a mystery because many have no records or identification number.

Though the state plugged most of the wells on her land, officials decided eight years ago to skip the one dripping oil that leaches into Knapp Creek. To do so would have required bridging the creek across from Thomas’ house, building a road for the heavy equipment and shoring up sensitive wetlands—an enormous price tag before an ounce of plugging concrete could be poured.

The infrastructure law money is targeted to plug only the wells state officials have documented. That could include wells like the one on her land that officials knew was causing pollution, but haven’t had the funds to fix.

“You’re cleaning up a local ecosystem,” said Wise, the state’s well-plugging chief. “Any plugged well is a good well.”