recalled its treadmill products and will stop selling them after a child died and more than 70 safety incidents were reported, walking back an earlier position that the devices were safe if used properly. The shares fell 15%, the most in about six months.

The recalls involve two Peloton treadmill models: Tread and Tread+, the company and the U.S. Consumer Product Safety Commission said in a joint statement Wednesday. Consumers who have purchased either treadmill should immediately stop using it and contact Peloton for a full refund, according to the statement.

The Tread+ machine, which costs more than $4,200, had been involved in a series of accidents, prompting a last month and an investigation by the safety commission. Peloton is recalling the cheaper Tread because the device’s screen could become loose, detach, and fall, potentially harming a user. 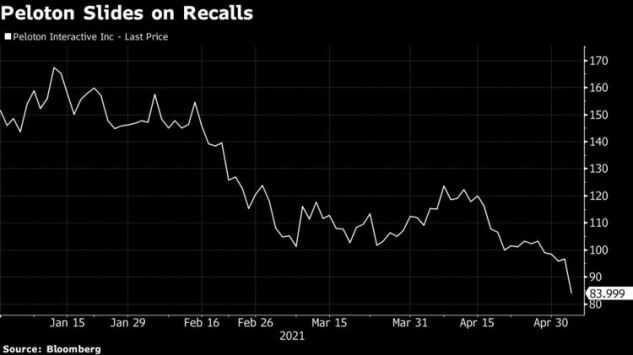 Sales of the treadmills account for a small portion of Peloton’s total annual revenue, which doubled during the pandemic to almost $2 billion in 2020. The company is most famous for its namesake stationary bike, with attached touch-screen to stream home workouts. But in earnings calls with analysts over the past several months, Peloton executives touted how the cheaper Tread model beat sales expectations in the U.K., saying the $2,500 machine could eventually be a “rocket ship” and that the treadmill opportunity is potentially larger than bikes.

Filings from the safety commission show that about 125,000 Tread+ models have been sold to date, while the Tread only has about 1,050 units on the market. That cheaper treadmill was introduced recently in the U.S. via limited sales channels. It was due for an expanded U.S. launch on May 27, and Peloton hasn’t indicated if that will be delayed. 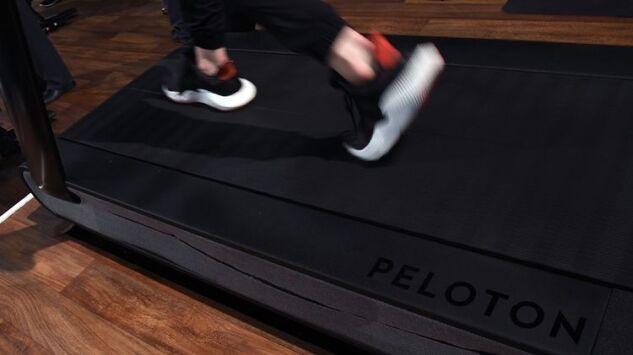 If the company did indeed sell 125,000 Tread+ units, that suggests it brought in more than $500 million from the product in its lifetime. The company was forced to pause deliveries of the Tread+ for several months last year due to the pandemic.

In total, treadmills make up about 10% of Peloton’s total revenue, according to of JMP Securities LLC. “I think the opportunity for Peloton was to do for the treadmill what it did for the bike.” He said he’s optimistic about Peloton’s ability to quickly fix the issues with the cheaper treadmill, but that a remedy for the pricier model could be further out.

Peloton also requires treadmill owners to buy a $39 per month subscription to unlock personalized workouts and the full catalog of classes. The recall could lead to some cancellations of that program as people return the hardware and receive refunds. Peloton reported its first in the three months ending Dec. 31, generating $870 million from hardware sales and nearly $200 million, or 18%, from subscriptions. At the time, the company raised its sales forecast for the full fiscal year to $4.08 billion.

“The voluntary recall of Peloton’s Tread and Tread+ is a clear negative,” analysts at Keybanc Capital Markets wrote. “This may have other unquantifiable impacts to long-term demand.” Peloton reports third-quarter earnings on Thursday. Peloton declined to comment on the financial impact of the recalls ahead of the earnings report. 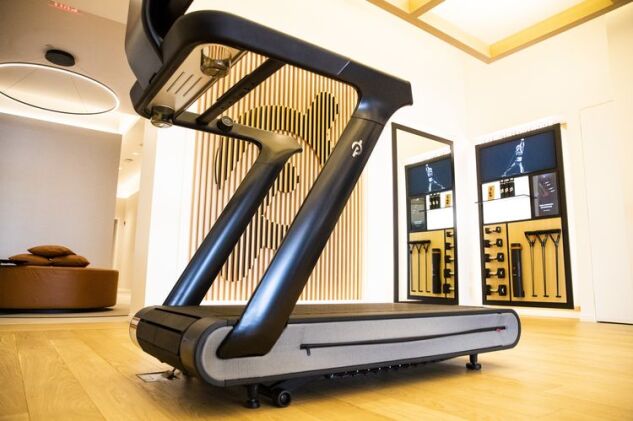 Peloton said full refunds for the Tread+ will be available until November 2022, with only partial refunds being offered after that time. For customers who don’t want refunds, Peloton is offering remedies and hardware fixes.

For the Tread+, the device which was involved in the death of a child, Peloton said it will help consumers move it to a room inaccessible to kids and pets. The company said it’s also working on a software update that will require a pass code to be entered to use the machine. Peloton said it is working on a repair program and hardware fix for the loose screen problem on the cheaper model.

The recall is a surprising reversal for Peloton. Last month, Peloton called the commission’s warning about the Tread+ “misleading and inaccurate.” The company said then that there was no reason to stop using the Tread+ as long as all warnings and safety instructions are followed. On Wednesday, Chief Executive Officer said it was an error to not take earlier warnings more seriously.

“Peloton made a mistake in our initial response to the Consumer Product Safety Commission’s request that we recall the Tread+,” Foley said. “We should have engaged more productively with them from the outset. For that, I apologize.”

The high-end treadmill first launched in 2018 and was renamed the Tread+ last year when the cheaper Tread was announced. Peloton has become synonymous with the pandemic era, attracting a legion of fans with its technology-infused stationary bikes and treadmills and subscription-based exercise program.

“The agreement between CPSC and Peloton is the result of weeks of intense negotiation and effort, culminating in a cooperative agreement that I believe serves the best interests of Peloton and of consumers,” Robert Adler, acting chairman of the CPSC, said in the statement.

The safety commission said the recall of the Tread+ followed 72 reports of adults, children, pets, and objects being pulled under the rear of the treadmill, the same flaw that led to the death of the child. Of those reports, 29 involved significant injuries to children, the CPSC said.

The treadmill recalls aren’t the first for Peloton. Last October, the company recalled pedals sold between 2013 and 2016 for about 27,000 bikes due to potential leg injuries from the parts breaking off. For that recall, Peloton provided replacement parts.

“We believe strongly in the future of at-home connected fitness and are committed to work with the CPSC to set new industry safety standards for treadmills,” Foley added in a statement posted on Peloton’s website. “We have a desire and a responsibility to be an industry leader in product safety.”

(Updates with estimates on overall sales from treadmills)