A sign stands near the site of the December 2012 Sandy Hook school shooting on the day of the National School Walkout on March 14, 2018, in Sandy Hook, Connecticut.
Photographer: John Moore/Getty Images

New cases targeting Remington Arms for marketing guns for military-style use, a Catholic diocese for touting student safety, and drugmaker Genentech for packaging medication in large, single-use vials, are all getting the attention of consumer law experts for their novelty.

Improper marketing claims themselves aren’t new. They date back to the 1970s when most states passed consumer protection laws modeled on the Federal Trade Commission Act, which prohibits unfair trade practices. The laws require, among other things, that sellers and providers of goods market and advertise their goods truthfully and responsibly.

But what is new are the defendants the suits have taken on, and the issues for which plaintiffs seek to hold them liable: Remington, for one of the country’s worst mass shootings in history; a West Virginia diocese, for sex abuse of young kids by priests and others in its schools and camps; and Genentech Inc., for driving up the prices of cancer drugs in California and beyond.

The notion that gunmakers, churches, and drug manufacturers are no different from other businesses when it comes to marketing, and may be held liable under state law just the same when they deceptively advertise, hadn’t really been the common view, legal experts who track consumer law say. That is in part because federal laws treat the gun and drug industries differently, restricting what claims can and can’t be brought.

In the case of the gunmakers, in particular, almost all gun violence-related liability claims have been barred.

But now more transactions are being viewed through the lens of the consumer. Deregulation and “outrageous behavior” by some in these industries have eroded the public’s confidence in their ability to act responsibly, said Heidi Li Feldman, a law professor at Georgetown University Law Center in Washington.

Consequently, more litigants are treating these industries as any other. In the process, they are turning to the same 50-year-old state consumer laws that have been the basis of deceptive marketing suits against other types of businesses.

“We now see an actor as a good or service provider who we didn’t before (the church) or we see ‘unscrupulous or unfair’ behavior that we might never have detected or focused on before,” Feldman said.

“Once you’re looking at these industries through a lens of less trust, it becomes much easier to see their conduct as unfair or unscrupulous,” she said.

It also may prove to be an effective liability strategy because the laws are broadly written in most states to cover a wide variety of alleged consumer violations. 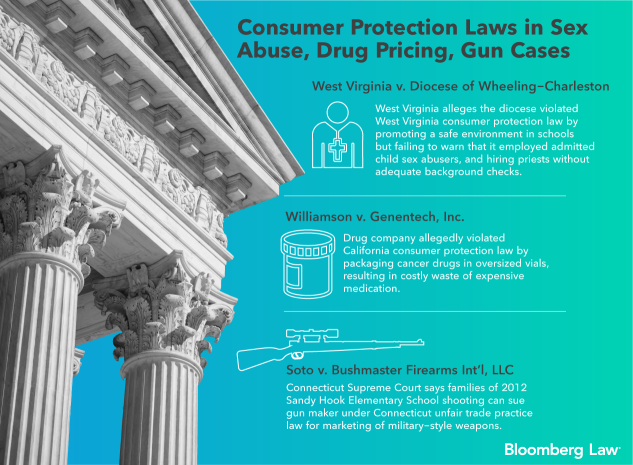 State consumer protection claims also require less proof than other legal theories because they relax the requirements for establishing liability and causation, according to Adam Zimmerman, a professor at Loyola Law School in Los Angeles. And the laws don’t ordinarily require plaintiffs to show they relied on a defendant’s misstatements or unlawful practices, said Zimmerman.

The new gun, church, and drug suits are all a “natural extension” of the broad regulatory powers that the state consumer protection laws delegate to state attorneys general and private parties, Zimmerman said.

The Connecticut gun case shows how state consumer protection law claims can get traction against defendants where other theories of liability have failed.

The court majority in that case said the federal Protection of Lawful Commerce in Arms Act didn’t preempt the families’ “immoral” marketing claim. That 2005 immunity law has stymied most suits against gun companies.

“Such elastic terminology lends itself to application to new types of cases,” he said. “It’s desirable to have consumer protection laws worded broadly because as society evolves, and bad actors invent new schemes, you want to be able to address them without enacting new laws,” Sovern said.

After Congress passed the PLCAA, gunmakers could expand their market without being concerned about certain types of tort lawsuits, Georgetown’s Feldman said.

The industry never anticipated that advertising guns as military-style weapons could arguably be an unfair trade practice, she said.

But once you have people using those weapons in mass shootings, Feldman said, “that could quickly made everyone much more receptive to thinking, ‘Is that an unfair trade practice?’”

An attorney for Remington didn’t respond to a request for comment.

Remington has asked the Connecticut court to put the proceedings on hold, pending resolution of a petition for review with the U.S. Supreme Court.

The week after the Connecticut ruling came down, West Virginia Attorney General Patrick Morrissey sued the Diocese of Wheeling-Charleston and former bishop Michael J. Bransfield. In this suit, the consumer protection claims challenge the diocese’s marketing of its schools as safe for children.

The complaint cites the diocese website, which says, “Providing a safe learning environment is inherent in the mission of our Catholic schools.”

But the diocese didn’t warn parents of its six high schools and 19 elementary schools that it “knowingly employed pedophiles in the past,” the suit says. The diocese also hired school and camp employees without adequately investigating their backgrounds, the state alleges.

Again, what is unusual about the West Virginia suit is the treatment of the diocese as any other service provider, in this case, a provider of child care, Feldman said.

“If I just told you, someone is bringing consumer protection act claims against a provider because they say they have certain levels of staffing and they have lower levels of staffing, that would sound like the most typical thing in the world,” she said.

Once you see the church as a child care provider, if it is true that you have a provider that isn’t protecting children from sexual abuse, that is also a consumer protection problem, Feldman said.

“So it’s really interesting that West Virginia is taking that approach and it reflects a huge shift in how culture regards the church,” she said.

The diocese said in a statement it “strongly and unconditionally rejects the Complaint’s assertion that the Diocese is not wholly committed to the protection of children.”

It added that the diocese “will address the litigation in the appropriate forum.”

Still another novel application of state consumer law can be seen in a new drug case in California, which goes after a drugmaker’s packaging to address the high prices of cancer medications.

Because dose depends on a person’s size, a portion of the expensive drugs gets thrown away at great cost to patients and their insurers, he said.

The complaint calculates the value of Williamson’s own wasted drugs at more than $10,000. It also cites a medical journal article that estimates approximately $2 billion a year in savings in cancer drugs in the U.S. if they were to come in smaller vials that allowed doses to be better tailored to patients.

Genentech’s packaging, which forces consumers and insurers to overspend, is “unlawful” and “unfair” under California’s Unfair Competition Law, Williamson alleges.

Consumer protection law is a natural fit, “once you get your head around the problem, the factual scenario,” Brian Wolfman, one of Williamson’s attorneys, said.

Here is a “problem that affects consumers, about the marketing of a product, and it drastically and unfairly increases the price of it,” said Wolfman, who runs the Georgetown University Law Center’s appellate courts immersion clinic.

However, the company said, “All of our medicines are packaged to meet FDA regulations.”