USC's Blake Ayles gets hit from behind during a game against Arizona State. Ayles played for USC from 2008 to 2011.
Photographer: Gina Ferazzi/Los Angeles Times via Getty Images

A strong safety for Marshall University’s football team from 2004 to 2007, Moravec had his NFL hopes cut short by a severe concussion sustained in his junior season. Now he’s one of hundreds of former collegians suing the NCAA over its alleged failure to warn and protect football players from long-term brain illnesses associated with the sport.

“I wish I would have known that you wouldn’t see this injury, that it would affect the remainder of your life, and that you can’t un-change it,” said Moravec, who suffers from near-daily seizures.

Unlike his counterparts who made it to the National Football League, Moravec has no union contract, workers’ compensation benefits, or settlement funds to help him cope with degenerative brain illnesses. And unlike former pros sharing in a $1 billion settlement of brain-injury claims, these college athletes sustained their injuries before having an opportunity to have a career at all--in football or any other profession.

That distinction could be a big factor for juries as at least 369 cases move toward trial, sports injury lawyers tell Bloomberg Law. The complaints—which propose personal injury class actions for players at scores of colleges dating back to the 1950s—could affect as many as 300,000 former players. By contrast, the NFL’s settlement class consists of 20,000 players.

The NFL concussion settlement has already paid out $624.5 million to retired players as of Feb. 25.

The collegians’ cases, many of which were filed by Edelson PC, a class action law firm based in Chicago, allege a toxic mix of profit-seeking institutions, concealed brain injury risks, and student-athletes desperate to keep their scholarships and a shot at the NFL.

Lawyers for the former players draw a contrast between the lost earnings potential of disabled athletes like Moravec, who had to quit his job with Geico Insurance because of headaches, blackouts, and memory problems, with the NCAA, universities, and powerhouse athletic conferences that are profiting from the players’ efforts on the football field.

The claimed lost earnings by student-athletes who have a degree but are unable to work because of their football-related cognitive illnesses could last a lifetime, without the economic backstop enjoyed by NFL players who earned big paychecks during their careers.

The NCAA collected $1.1 billion in 2017, the same year the Big Ten conference inked a media deal worth $440 million each year. Ohio State University agreed to a 15-year, $252 million apparel agreement with that began in 2018. 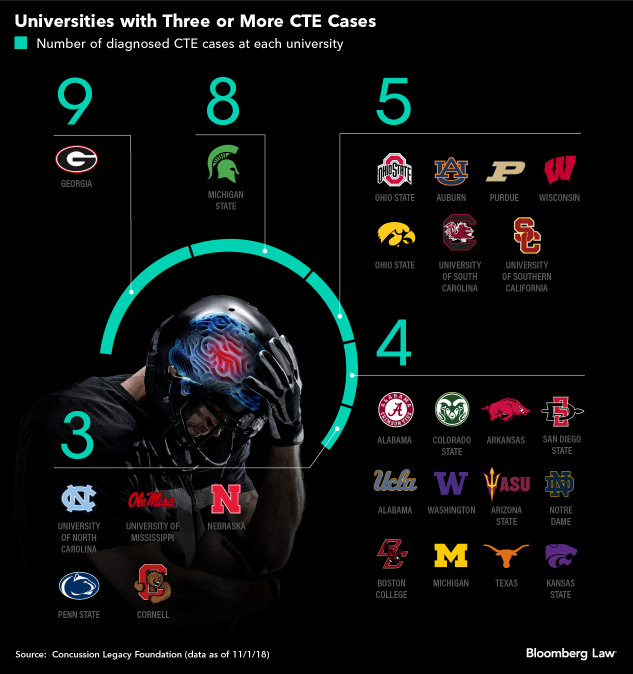 “You can have kid who played at a power school and the institution is making millions and perhaps billions of dollars on the back of that athlete,” Paul Anderson, of Humphrey Farrington & McClain in Independence, Mo., said. “I think on its face that’s going to tug at the heartstrings of a jury.” Anderson, who isn’t involved in the NCAA cases, represents athletes in sports injury litigation and blogs about NFL concussion litigation.

Anderson said such earnings issues are inherently fact-specific—such as the degree and type of illness of each plaintiff—but that the NCAA nonetheless risks a multi-million-dollar jury verdict in a bellwether case that could be replicated.

“It’s a tough calculation,” said Lee Igel, a professor at New York University’s Tisch Institute for Global Sport in New York. “We have to keep in mind that a person’s college experience increases career prospects, but does not guarantee them.”

“Who is to say what each of them could or couldn’t do, would or wouldn’t do, with their careers and lives in years to come?”

The litigation faces a vigorous fight by the NCAA and another formidable obstacle—proving the illnesses were caused by college football. No American court or jury has definitively decided whether chronic traumatic encephalopathy (CTE) and related brain illnesses are caused by repetitive head traumas in football or other sports.

“These copycat complaints are full of misleading and inaccurate declarations like the previously filed similar lawsuits and public statements made by the small group of lawyers submitting these claims,” Donald Remy, the NCAA’s chief legal officer, said.

The dozens of filings over the last two months, which join 110 cases already pending in the U.S. District Court for the Northern District of Illinois, aren’t limited to diagnosed player concussions from highlight-reel hits in televised games.

They include a complaint by Blake Ayles, 29, a tight end for the University of Southern California in Los Angeles from 2008 to 2011, peppered with references to subconcussive hits that can accumulate to create later-life brain diseases.

Those references point up a potential weak spot in the NCAA’s defense—that it low-balls the damage done to players by the near-constant head impacts in football.

Chris Borland, a linebacker at the University of Wisconsin who went on to play for the San Francisco 49ers, echoed that theme in Feb. 26 testimony before the Oversight and Investigations Subcommittee of the House Committee on Natural Resources.

Borland retired after his rookie NFL season, citing the risks football posed to his brain.

“In my experience in football—which is not unique to that of my friends and teammates—symptoms of concussion, whether it be dizziness, tinnitus, imbalance, or others, were weekly occurrences during the season,” he said.

The NCAA has skewed the true scope of brain injuries in football by failing to account for injuries that often aren’t reported by players, he said, referring to studies of thousands of athletes by the NCAA and the Department of Defense.

That research, according to Borland, “ignores the repetitive subconcussive hits to the head that football players experience, and that are believed to contribute to neurodegeneration.”

‘You Get Up or You Sit Out’

What the less-intense head impacts lack in force they make up for in repetition, particularly in practices, the players said.

Ayles, who suffers from memory loss and depression, said that 80 percent of his head injuries occurred in practices, which are “supposed to be harder so the game is easy.”

He estimates he’s had “four or five” diagnosed concussions overall, 10 to 20 other times he was “knocked out,” and countless severe blows when he “saw black.”

Yet the risk of secondary, and potentially fatal, head traumas loom as players work to keep alive their dreams of playing professionally.

“You don’t say anything because you’re afraid of being taken out,” Ayles said. “It’s the paycheck that can come from you being seen by NFL scouts.”

Tim Tessalone, USC’s sports information director, declined to comment on Ayles’s claims, but said that “the university continues to place the safety and well-being of our student-athletes as the top priority of our athletic programs.”

The NCAA has discounted the complaints as meritless since the first cases were filed two years ago. In his recent statement to Bloomberg Law, Remy, the NCAA’s chief legal officer said, “More lawsuits do not change our resolve and will not impact the NCAA’s commitment to student-athlete safety.

“The NCAA looks forward to correcting the factual and legal record,” he said.

The players, in trying to overcome the lack of any clear court ruling linking CTE to football, will likely point to an Ohio Supreme Court decision last year that allowed the estate of a former Notre Dame University football player to proceed with claims that his CTE stemmed from college football.

More evidence was needed to determine whether Steven Schmitz’s CTE was a “latent” disease that qualified for an elongated statute of limitations, the state’s top court said.

For Anderson, the cases present a balance of equities that pit players who put their “heart, soul, and brain” into the sport against institutions that have made billions of dollars from their labors.

For Ayles, the equation is simpler: He loves football but not what it’s done to him.

“The pain and injuries that come along later on aren’t in the brochure when they sign you up.”

To contact the reporter on this story: in Washington at ssellers@bloomberglaw.com