An oil pump jack in a field with wind turbines in Corpus Christi, Texas, on Friday, Feb. 19, 2021.
Photographer: Eddie Seal/Bloomberg

Texas is drawing battle lines in a fight against investors and companies turning their backs on fossil fuels.

signed a bill into law on Monday banning state investments in businesses that cut ties with the oil and gas industry. The underlying message, according to one of the most powerful energy regulators in the state, is simple: Boycott Texas, and we’ll boycott you.

The new measure is Texas’ Republicans latest rebuke of ESG investing as the state clings to its status as America’s crude capital. Oil and gas companies, already under pressure to funnel more cash into dividends to please shareholders, are now having to reckon with major corporations from Wall Street banks to Silicon Valley tech giants deeming climate change as a top priority when determining investments.

Last month, Texas Railroad Commissioner , a Republican, called on the Securities and Exchange Commission, U.S. President and Congress to issue rules regulating sustainability-focused investments so they don’t discriminate against oil and gas producers. In addition to being Texas’ top oil and gas regulator, the Railroad Commission is also known for being one of the industry’s most ardent supporters. 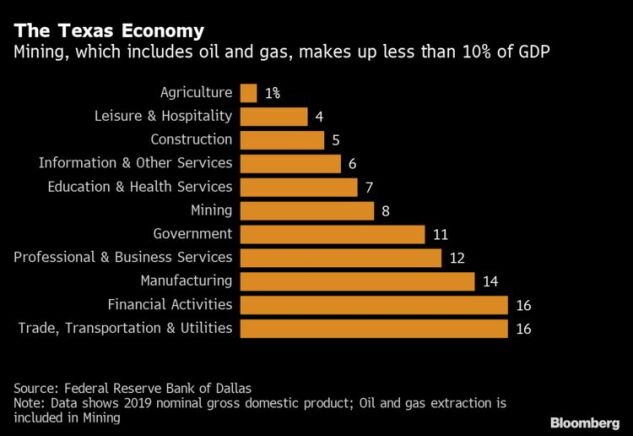 “The concerns that would arise in considering the larger universe of business development in the state, like discussion of climate change and changes in corporate practices, are all moving to the back of the line,” said Jim Henson, a professor at the University of Texas at Austin who heads the Texas Politics Project. “We’re not at a point where these kinds of considerations are going to outweigh partisan gestures like this.”

In reality, the new law probably won’t lead to massive selling by state funds like the Teacher Retirement System of Texas or the Employees Retirement System of Texas. Thanks to a number of amendments, a fund may be able to justify holding stock in, say, Google -- which won’t provide AI services for oil and gas production -- by demonstrating that it would be bad for its members if it was forced to sell. And if an offending company is held indirectly, like through a private equity fund, there’s another exception.

In another blow to Wall Street, Abbott also signed legislation on Monday that would ban state and local governments from work with companies whose policies restrict the firearms industry. The law could hurt Bank of America Corp. and Citigroup Inc.’s municipal underwriting businesses in Texas, a huge market for state and local debt deals. The banks announced policies that set restrictions on the firearms industry in 2018.

The bills are the latest examples of the growing divide between Republican lawmakers and corporations that have taken a public stance on hot-button issues. Last month, and were among companies that wrote Texas leaders, urging them to “oppose any changes that would restrict eligible voters’ access to the ballot” as the state worked to finalize bills that would make it harder to vote in certain areas.

In late May, Abbott also signed a bill restricting cities from banning natural gas hookups in new homes and businesses, after Austin considered phasing out the use of fossil fuels as part of its climate plan.

As corporations increasingly shun fossil fuels in an effort to combat climate change, the oil and gas industry has pointed to the robust demand for its products as evidence that boycotting its companies is hypocritical.

Last year, the chief executive officer of a Houston-based oilfield services firm wrote a four-page letter to the head of The North Face, after the popular outdoor-clothing brand declined to make an order of jackets with his company’s logo as an employee Christmas present.

“The irony in this statement is your jackets are made from oil and gas products the hardworking men and women of our industry produce,” , CEO of Innovex Downhole Solutions, wrote in a letter first reported by a local TV news station in Odessa, Texas. “I think this stance by your company is counterproductive virtue signaling, and I would appreciate you re-considering this stance.” The North Face didn’t respond to a request for comment.

The state didn’t always take such a combative stance toward Wall Street though. In fact, Christian cited when the Railroad Commission said it would crack down on natural gas flaring after months of backlash against the agency’s policy toward the practice. Texas has one of the worst records for in the U.S., with large volumes of gas being burned in the prolific Permian Basin.

“We cannot continue to waste this much natural gas and allow the practice of flaring to tarnish the reputation of our state’s thriving energy sector to the general public and investors on Wall Street,” Christian during a commission meeting in June of last year.

By early January, Christian began taking at Wall Street. In a press release, he decried “an assault from all fronts on energy independence.” And in a statement last month, he said “extremists are coming after your retirement account vis-à-vis ESG investing.”

In an e-mail to Bloomberg, Christian said flaring “is not the existential threat to the environment it is made out to be,” adding that improvements are being made to reduce the practice and that “that message needs to get out to Wall Street.”

For Senate Bill 13, the next step for the state will be to determine how it will implement a divestment directive that applies to pension funds and retirement systems that manage hundreds of billions of dollars.

“That may include phased divestment and/or mechanisms to apply for exemptions,” said Michael Sury, a senior finance lecturer at the UT’s McCombs School of Business. If a state fund “is invested in a non-compliant but critical investment activity,” he said, “there will likely be some process for applying for relief.”

(An earlier version of this story corrected the day in the seventh paragraph.)

(Updates with details on flaring in thirteenth paragraph.)