Health-care industry deals during the first quarter of 2021 were up more than 50% than the same period in 2020, according to Epstein Becker Green attorneys and health industry financial/investment analysts at KPMG and FocalPoint Partners. They predict this pace will slow but the outlook for the health-care and life science sectors remains strong as the country recovers from Covid-19.

The volume of announced and closed health-care industry deals in March (276) was the highest of any month so far in 2021, bringing total deal volume in the first quarter of the year to 723, up 52% from the first quarter in 2020 (476). Topping the list was the life science and pharmaceutical industry, as work involving the Covid-19 vaccine continues.

This record pace is unlikely to continue for the entire year, but we expect the investment outlook to remain strong for the health-care and life sciences sectors as the country continues to recover from the Covid-19 pandemic, patients and consumers more fully resume and increase use of preventive and routine care delayed due to health concerns, and the economy continues to recover.

In addition, congressional efforts to improve infrastructure and increase jobs could fuel further transaction activity. However, some possible health-care system reforms, such as changes to Medicare eligibility or drug pricing reforms, could have unpredictable impacts on sectors of the health-care industry. 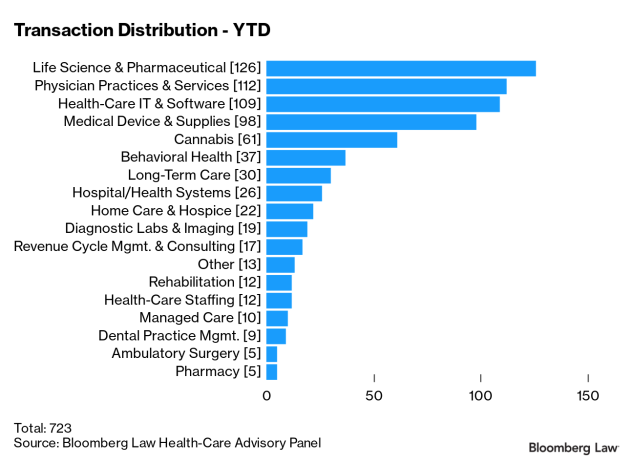 Life science and pharmaceutical (57) had the highest volume of announced or closed deals in March and the highest monthly volume of any sector since tracking began. The sector has 126 deals year-to-date, up 48% from Q1 2020.

Interest in life sciences transactions is likely to remain high through 2021, as current Covid-19 vaccine distribution continues, revised vaccines or boosters are developed to address emerging virus variants, and new therapeutics are approved. Additionally, for the remainder of the year, life sciences companies are expected to continue innovation on next-generation cell and gene therapies, further increasing competition and interest in the sector.

Physician practices and services capped off another active month with 40 deals announced or closed in March. Totals for Q1 (112) are up more than 80% from Q1 2020 (62) and the second highest volume of all sectors year-to-date. At this current pace, the sector could see upwards of 400 deals this year as rising patient volumes and various favorable industry tailwinds have continued to attract investors to the subsector a year after the onset of Covid-19.

Physician groups are seeing the substantial benefits of being part of larger organizations for many reasons, such as: (i) access to capital for practice expansion including for new offices, physician recruitment, and expanded ancillary services; (ii) economies of scale to reduce operating costs and increase profits (e.g. for purchasing malpractice insurance, health benefits, expensive medications & supplies, etc.); (iii) improved managed-care contracting; and (iv) professionalized practice management and corporate infrastructure.

The women’s health subsector, including OB/GYN and fertility services, has experienced continued interest from both strategic and financial buyers. In particular, investor interest for fertility services providers has been strong, driven by factors such as a highly fragmented provider landscape, an increasing average age of women at childbirth, and an expansion of insurance coverage for infertility-related services, which reduces patients’ out of pocket costs for expensive services and provides access to a greater patient population. 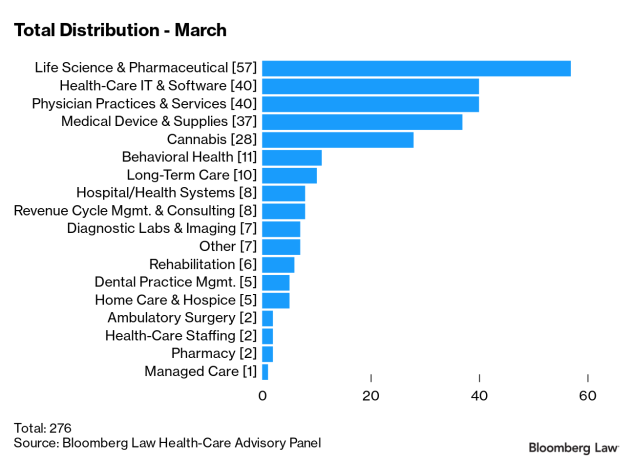 In regard to the many other physician sector deals in March, 20 involved primary care practices and centers, half of the month’s 40 transactions. Also notable are five deals in each of eyecare and orthopedics, plus the remainder of the activity covering seven other different specialties.

There were eight hospital and health system transactions announced or closed in March, for a total of 22 transaction during Q1. This is down from 34 deals in Q1 2020 as consolidation efforts have slowed and acquirers continue to be selective within the subsector.

An announced deal worth highlighting in March is Cedars-Sinai Health System’s proposed affiliation with Huntington Hospital. The addition of Pasadena, Calif.-based Huntington would add another highly regarded hospital to the Cedars-Sinai family and further expand the health system’s ability to reach patients in the Los Angeles area.

The deal represents another example of a well-respected, high credit-rated health system partnering with smaller, independent hospitals to increase size and scale in a respective market.

Health-care IT started 2021 strong with 109 announced/closed deals through the first quarter and 40 in March, the highest month year-to-date. Ongoing recovery from the pandemic will create new opportunities for the sector to support transition of care back into traditional settings for some patients while enabling other patients to continue utilizing telehealth and other patient remote monitoring technologies accelerated over the past year.

Medical device and services had 37 announced/closed deals in March and 98 through the first quarter of the year. Increasing resumption of elective procedures, along with ongoing demand for supplies to support distribution, storage, and administration of Covid-19 vaccines, is expected to keep the sector strong for investment over the coming months.

Cannabis deal volume has continued to exceed expectations, with the 28 announced or closed deals in March marking the most active month since tracking began. The 61 deals in Q1 are almost double that of Q1 2020 (35), due to the increased legalization of both recreational (16 states) and medicinal (36 states) use and the potential for federal legalization.

As the market continues to grow, acquisition will focus on the assets of distressed companies and those targets that allow entrance into new markets and expansion of existing marketplaces.

Outlook for Remainder of 2021

As significant progress is made on Covid-19 vaccine distribution and administration, the policy focus from the Biden administration and Congress will remain on stimulating the economy and supporting the national recovery.

Although the first quarter of 2021 set a record pace for transactions, health-care and life sciences stakeholders will need to pay close attention to how proposals being considered by Congress could impact their business and overall outlook on transactions for the remainder of the year.