, the parent of Chuck E. Cheese and Peter Piper Pizza, filed for bankruptcy protection after the coronavirus pandemic shuttered its locations and kept families at home.

The in the U.S. Bankruptcy Court for the Southern District of Texas makes CEC the latest in a string of companies upended by Covid-19. Lockdowns have drained revenue, keeping consumers at home and pushing corporations into bankruptcy.

CEC, acquired by private equity firm in a 2014 leveraged buyout, has more than 600 Chuck E. Cheese outlets and over 120 Peter Piper Pizza venues.

As of June 24, 266 company-operated Chuck E. Cheese and Peter Piper Pizza restaurant and arcade venues have re-opened, CEC said in a . It expects to maintain operations in theses locations during the Chapter 11 process, and to open additional locations each week. CEC franchised locations operate under separate legal and financial structures and are not included in the Chapter 11 filings, the company said.

The company filed for bankruptcy protection without a deal in place. It said it will use the bankruptcy process to continue discussions with its stakeholders and landlords to achieve a balance sheet restructuring that “supports its re-opening and longer-term strategic plans.”

Both loan and bondholders to CEC were contemplating putting new money into the business to keep it afloat, Bloomberg reported last week. They brought in advisors to help them evaluate options, including fresh capital to help CEC ride out the pandemic. 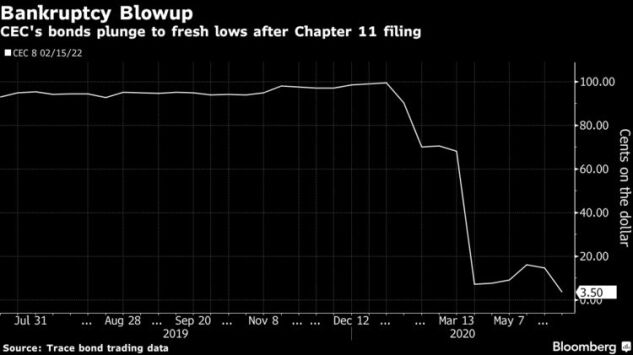 Entertainment and leisure have been among industries hardest hit by state and federal guidelines to stay at home. Though restrictions are starting to ease, it’s how many consumers are ready to return to family entertainment destinations.

Irving, Texas-based CEC was originally incorporated under the name ShowBiz Pizza Place Inc. The company changed its name in 1998 to CEC Entertainment and today its franchisees operate venues with locations in 47 states and 16 foreign countries and territories, according to its website.

A plan to take CEC’s parent company Queso Holdings Inc. public through a merger with shell company Leo Holdings Corp. was last year -- a deal that would have valued the firm at about $1.4 billion.

The case is In RE: CEC Entertainment Inc., No. . U.S. Bankruptcy Court for the Southern District of Texas (Houston).