Consumers are suing dozens of companies ranging from the NFL to NPR for sharing tracking data on what videos they watch, in a growing privacy class action trend that exploded in September.

At least 47 proposed class actions filed since February claim that Pixel tracking tool sent the plaintiffs’ personal video consumption data from online platforms to Facebook without their consent, violating the federal Video Privacy Protection Act, a Bloomberg Law analysis of court dockets found. Almost half of the new cases (22) were filed in September alone. Five cases have been voluntarily dismissed.

“It’s of importance that people can watch what they want to watch and not have the whole world know about it and have it be monetized and exploited and correlated and aggregated with other data,” said Douglas Cuthbertson, a partner with Lieff Cabraser Heimann & Bernstein LLP in New York whose practice includes digital privacy work. His firm is litigating several proposed class actions targeting Meta Pixel data-sharing under the VPPA.

Three firms are responsible for over half of the lawsuits filed so far. Peiffer Wolf Carr Kane Conway & Wise LLP and Bailey & Glasser LLP jointly filed 12 lawsuits in September, and Bursor & Fisher P.A. has also filed 12 lawsuits over the course of the year, individually and with other firms. The firms either declined or did not respond to requests for comment.

The rising number of cases is evidence of how plaintiff’s counsels are creatively applying traditional causes of action to litigate modern privacy issues in the absence of federal consumer privacy legislation, attorneys said. 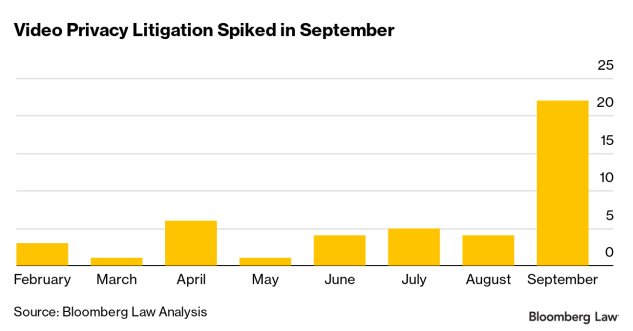 While the video privacy law only applies to actions of the provider, hospital websites’ similar data-sharing with Facebook has sparked legal action by patients against both the health-care providers and Meta. Because only the US government can sue under the federal health privacy law, the Health Insurance Portability and Accountability Act, the complaints in those proposed class actions accused them of violating other state or federal laws that focus on invasions of privacy or consumer protection.

A Meta spokesperson declined to comment on the litigation, but highlighted the termsfor Facebook Business Tools, which require companies to obtain “all necessary consents” before using its tracking technology.

“Advertisers should not share Business Tools Data with Meta that they know or reasonably should know is either from or about children under the age of 13, or includes health or financial information, or other categories of sensitive information,” the spokesperson wrote in an email. “This includes any information defined as sensitive under applicable laws, regulations and applicable industry guidelines.”

The Pixel class actions join other creative emerging class action trends—such as filing state wiretapping suits against companies that use third-party browser surveillance software—that demonstrate how lawyers are seeking out new avenues to litigate consumer privacy without a specific federal law, said Odia Kagan, a partner at Fox Rothschild LLP in Philadelphia who specializes in privacy and data security.

If the Pixel litigation proves successful, liable companies would face a heavy financial toll: VPPA violations can result in statutory damages of up to $2,500 per class member, and several lawsuits estimated potential class sizes to be in the hundreds of thousands.

The VPPA cases highlight “the growing importance of taking seriously people’s rights with respect to the collection and use of their information, specifically with respect to sharing with third parties for a purpose that benefits the third party,” Kagan said.

The 1988 video privacy law was originally crafted to safeguard consumers’ videotape rental records, but has since been broadened to bar digital video providers from disclosing identifiable information about a consumer’s viewing habits without their express consent.

The VPPA requires a provider to obtain informed and written consent before disclosing an individual’s video viewing information to third parties.

Cuthbertson of Lieff Cabraser said that consent must be obtained via a separate form from other user agreements, adding that the platforms he has investigated in VPPA cases have failed to do so.

The plaintiffs in most of the proposed class actions Bloomberg Law reviewed make similar allegations.

One of the first VPPA cases addressing Meta Pixel privacy concerns, filed against Boston Globe Media Partners LLC in February, recently moved to the discovery phase after a judge from the US District Court for the District of Massachusetts denied the defendant’s motion to dismiss.

In doing so, Chief District Judge wrote that the class action’s allegations presented a “viable VPPA claim” based on the facts presented.

Mueller’s opinion “might be typical” of other rulings on cases involving similar VPPA claims, Cuthbertson said.

Of the nearly 50 cases currently filed, Bloomberg LP is among the companies facing these kinds of claims. Bloomberg Law is operated by entities controlled by Michael Bloomberg, the founder and majority owner of Bloomberg LP.

While most of the video privacy cases have yet to reach discovery, cases involving National Public Radio, Gamestop, NYP Holdings, Nexstar Media, and Bloomberg LP have been voluntarily dismissed. Attorneys for the companies that reached voluntary dismissals didn’t respond to requests for comment or declined to comment.

The merits of the lawsuits are “extraordinarily strong,” said Jason Zweig, a consumer class action attorney at Keller Postman LLC in Chicago who is not involved in any of the VPPA litigation.

Zweig raised concerns that some class actions may not pan out if companies include arbitration or class waiver clauses in their terms and conditions.

“Maybe there will be some arguments about whether there was really an agreement by the user to arbitrate claims against the website; in other words, they didn’t properly form a contract to agree to arbitrate,” Zweig said. “But if you’ve been alive for the last 10 years and following class action litigation, you would know that those are all arguments that are going to be very difficult to overcome.”

The wave of litigation for similar claims may continue to rise for the next year, Zweig said, but he expects the volume to dwindle after that as companies decide that “using this Pixel is just not worth it.”

(Updated with comment from Meta in paragraphs eight and nine.)