Medical prescription records should be shielded from warrantless searches by federal agents cracking down on illegal use of opioids and other narcotics, New Hampshire officials are arguing in a First Circuit case.

The case is the first to test whether the Supreme Court’s decision last year in a cellphone privacy case, Carpenter v. United States, should apply to consumers’ prescription information that states collect and hold. Success for New Hampshire may encourage other states to thwart law enforcement access to the drug databases.

New Hampshire’s arguments are “on stronger legal footing now with the Supreme Court’s decision,” Nathan Freed Wessler, a staff attorney with the American Civil Liberties Union, said. The ACLU, which says the warrantless access is unconstitutional, has filed a brief in support of New Hampshire in the case, U.S. Department of Justice v. Jonas, which is before the U.S. Court of Appeals for the First Circuit.

In Carpenter, the Supreme Court ruled 5-4 that law enforcement generally needs a warrant to access at least a week’s worth of cellular phone data showing an individual’s location. Prosecutors had used four months of phone data at the trial of Timothy Ivory Carpenter to show he was near the sites of a string of armed robberies.

The states’ drug databases capture information about opioid use and a wide range of other prescriptions. These include drugs those related to stress and trauma-related disorders, like Xanax; or hormone replacement therapy, like Testosterone; or ones associated with cancer patients undergoing chemotherapy, like Marinol. Every state except Missouri keeps databases of individuals’ prescriptions, in part to prevent addiction and illegal use of controlled substances.

The records “reveal intimate, private, and potentially stigmatizing details about patients’ health,” the ACLU told the First Circuit in its friend-of-the-court brief.

The Drug Enforcement Administration has requested warrantless access to some states’ databases, using subpoenas, as part of investigations into individuals and pharmacies. The probes are part of the DEA’s effort to stop illegal prescription use amid a national opioid epidemic. More than 130 people die each day from opioid-related drug overdoses, the U.S. Department of Health and Human Services said on its website in September.

Some states have rejected the DEA requests, citing federal and state laws and Fourth Amendment protections against unreasonable searches. That has prompted court battles. 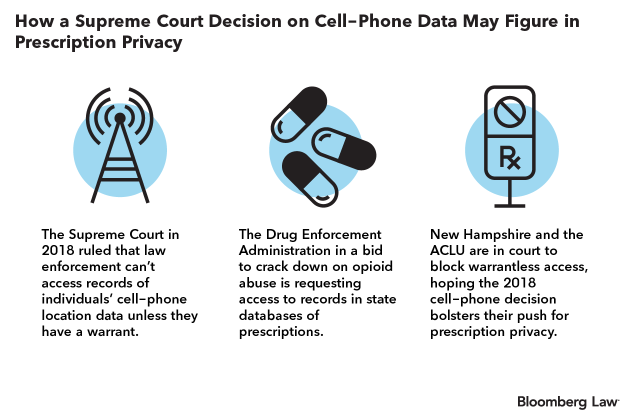 In New Hampshire last year, the manager of the state’s database, Michelle Ricco Jonas, opposed the DEA request to examine nearly two-and-a-half years of a person’s prescription data. Federal agents haven’t named the person, who reportedly may have filled fraudulent prescriptions, according to a DEA court filing.

New Hampshire in the appeal asked the court to address the unreasonable search question raised by the Carpenter cell-location case.

The Carpenter case “requires reversal” of the lower court decision on prescription drugs, Ricco Jonas, represented by the state attorney general’s office, told the First Circuit in a filing.

The Justice Department countered that prescription records provide a “window into a single aspect of life,” while cellphone location information shows the entirety of an individuals’ movements. “Carpenter should not be extended to prescription drug records,” it said in its brief.

A decision in favor of New Hampshire would likely encourage pushback against law enforcement access to the databases in other states in the circuit, which includes Massachusetts and Maine, said Anne Boustead, an assistant professor at the University of Arizona.

“This is the type of thing I would expect to see in more circuit courts going forward,” Boustead said.

If the case goes in favor of New Hampshire, it will be a “huge deal,” marking the first time an appeals court will address federal law enforcement access to records in the databases since Carpenter, Jennifer D. Oliva, an associate professor at Seton Hall Law, said.

“Courts are even more likely to rule that warrantless searches of highly sensitive health-care data run afoul of the Fourth Amendment in the post-Carpenter world,’’ Oliva said in a forthcoming paper on prescription drug policing before and after the cell-phone case.

Earlier court decisions have gone the DEA’s way. The Ninth Circuit in San Francisco two years ago ruled in favor of giving the DEA access to Oregon’s database. A Utah federal district court also upheld DEA access in that state.

The Justice Department last month went to court in Colorado seeking to enforce subpoenas for DEA access to the database in that state for investigations into two pharmacies.

The First Circuit heard oral arguments in the New Hampshire case in October and could rule any time. The U.S. attorney’s office handling the case said Justice Department policy is not to confirm or deny the existence of an investigation. An attorney for Ricco Jonas didn’t respond to a request for comment.

The DEA would benefit from better access to the state databases, called prescription drug monitoring programs, in opioid investigations, the Justice Department’s inspector general said in a September report. The agency should work with states to reach agreements for timely access while ensuring privacy, the report said.

State laws differ in requirements for law enforcement access. Some require a search warrant based on probable cause, while most others provide a lower legal bar.

The states have an opportunity to “minimize harm and maximize benefit” of the programs, said Leo Beletsky, a law and health sciences professor at Northeastern University and faculty director of the Health in Justice Action Lab.

“Under the banner of overdose prevention,” he said, “these laws have been able to fly by without appropriate safeguards.”

To contact the reporter on this story: in Washington at smerken@bloomberglaw.com