Location tracking data from is a tempting way for law enforcement to seek out suspects in the vicinity of a crime, but a first-of-its-kind legal ruling could put a stop to police efforts to use it.

These so-called geofence warrants allow law enforcement to scour a crime scene for potential suspects, rather than acting on a hunch about a specific suspect and asking a judge for a warrant to search their home or belongings.

Geofence warrants rely on Google’s extensive records showing where a user’s mobile phone is located at a given time, offering a novel way to identify criminal suspects who might not otherwise be found. But allowing police to scrutinize movements by a pool of phones near a crime reveals other people’s whereabouts as part of the hunt for a suspect, posing a privacy concern.

“The places we go tell a lot about our lives,” said Hayley Tsukayama, a legislative activist for the nonprofit Electronic Frontier Foundation. “Having that information analyzed without cause, for most people swept up in these warrants, that’s a huge privacy violation.” 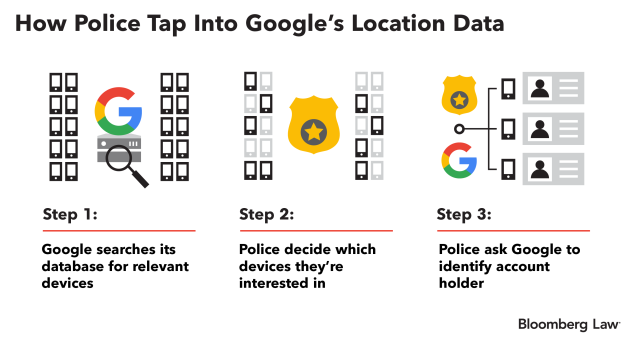 Using a geofence warrant to find a bank robbery suspect violates the Fourth Amendment’s protections against unreasonable searches because police sifted through other people’s location histories in the process, without establishing legal justification for searching them alongside the suspect, a federal judge in Virginia decided in early March.

The judge still let evidence drawn from the location data search stand in this case, the first where a criminal defendant challenged the use of a such evidence in his indictment. This part of the ruling relied on what’s known as the “good faith” exception to the Fourth Amendment’s warrant requirement, meaning law enforcement officers acted on what they thought was a valid warrant at the time.

A lawyer for Okello Chatrie, the man accused of robbing a bank near Richmond, Va., declined to comment on whether he would appeal the ruling.

The robbery ruling in the U.S. District Court for the Eastern District of Virginia could have implications for police departments as they increasingly seek to search Google’s location data, with many privacy advocates hoping that judges in other courts will follow its lead to deny issuing geofence warrants going forward.

The decision from U.S. District Judge Hannah Lauck also raises questions about whether legislatures should step in to set parameters around how, or even whether, law enforcement should use these warrants.

Lawmakers in New York have proposed a bill to block police efforts to tap into Google’s trove of location information. The bill’s backers include the Surveillance Technology Oversight Project, a New York-based privacy advocacy group.

The project’s founder and executive director Albert Fox Cahn said he’s hopeful that the legislation, first introduced in 2020, will move forward and become a model for other states, now that the judge in the robbery case deemed this kind of location history search unconstitutional.

It remains to be seen if other judges will agree with Lauck’s reasoning, which hinged on the privacy impact for other people who unknowingly appear in the search for a suspect. The judge’s ruling found that police didn’t show what’s known as probable cause to search these other people.

“Even if this opinion does become effectively the law of the land if other courts follow suit, there would still be some room for police to meet the standards of probable cause to use this investigatory tactic,” said Jane Bambauer, a law professor at the University of Arizona who studies the social costs and benefits of big data. Geofence warrants “would be more limited” as a law enforcement tool, she added. 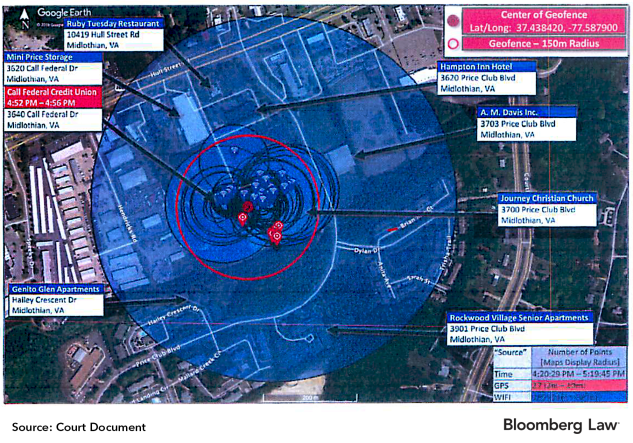 In the USA v. Chatrie case, law enforcement officers used mapping software to visualize location data from Google showing which devices were near the bank around the time of its robbery.

Decisions on whether to grant the warrants going forward could depend on the crime being investigated, Bambauer said. For a series of seemingly linked crimes, comparing phone location histories could reveal a suspect present across events.

A federal judge in Illinois granted law enforcement access to Google location data for an investigation into 10 fires in the Chicago area in 2019 that were believed to be connected. The judge decided that the request was narrow enough that it wouldn’t infringe on Fourth Amendment rights.

State and local law enforcement are increasingly turning to Google data in search of suspects for robberies or other crimes, according to a report from the tech giant.

In the bank robbery case, Google submitted a legal brief urging the Virginia court to rule that law enforcement must obtain a warrant supported by probable cause to gain access to the company’s location history records.

“We are reviewing the court’s decision,” a Google spokesperson said of the Chatrie case. “We vigorously protect the privacy of our users, including by pushing back on overly broad requests, while supporting the important work of law enforcement.”

Google’s data is more precise than other location information that’s collected when a mobile phone pings nearby cell towers. The U.S. Supreme Court ruled in 2018 in Carpenter v. United States that a warrant is required for law enforcement officials to access cell tower location history.

Geofence warrants could work their way up to the nation’s top court next, if more criminal suspects challenge their use, according to John Seiver, of counsel at Davis Wright Tremaine LLP.

“If you’re a criminal, this is a good hint to them,” Seiver said. “Either don’t take your phone with you or turn it off.”