A group of multicolored tablets are seen at a pharmacy in Indonesia on July 24, 2019.
Photographer: Dimas Ardian/Bloomberg

Drug patent lawsuits took a 21% dive from this time last year, a “perfect storm” that traces back to 2016 when the FDA only approved a handful of new drugs.

That means fewer generic drugs are expected to hit the shelves based on lawsuits launched in 2020. However, the dip is expected to be temporary because the number of novel drugs winning Food and Drug Administration approval rebounded in 2017 and in subsequent years.

“There’s just far fewer opportunities for generics to take advantage of this year,” said Keri Schaubert, a patent attorney at Cozen O’Connor. “When you combine that with Covid-19, you have the perfect storm.” 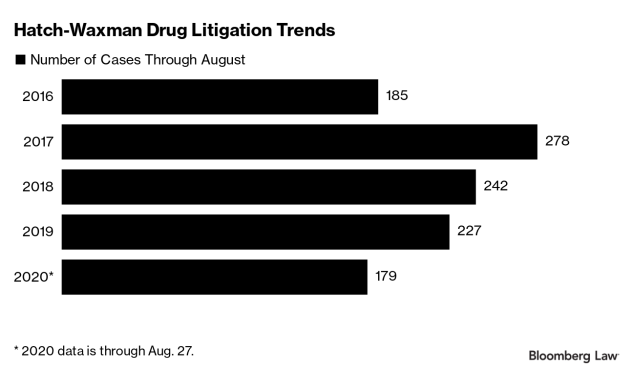 Under Hatch-Waxman, generic drugmakers must wait four years from a brand drug’s approval date to apply to make their own versions of approved drugs, meaning 2020 has fewer likely targets.

After a generic company files a drug application stating its intent to make a cheaper version of a novel drug, the brand has 45 days to respond by filing a Hatch-Waxman case, in which the brand sues for patent infringement.

The pandemic delayed Hatch-Waxman cases. That could push some litigation out beyond the automatic 30-month stay that precludes generics from entering the market by delaying FDA approval of the cheaper version while cases make their way through the courts, said Kevin Noonan, a partner with McDonnell Boehnen Hulbert & Berghoff LLP in Chicago.

That could force some generic drugmakers to make some hard decisions about launching their product before litigation is resolved, he said.

In light of court delays, generic companies may put off filing their drug applications—the act that typically results in the brand name company suing for infringement under Hatch-Waxman within 45 days, Noonan said.

That’s contributing to this year’s low litigation rate, so far.

“People are keeping their powder dry,” he said. “They’re still doing the work, they’re still getting ready—and if they’re a generic—they’re holding onto their investment until they’re ready to go.”

Typically, the Hatch-Waxman system encourages generic drugmakers to file their applications at the earliest possible date to get what’s known as the first-to-file incentive: 180 days as the only generic on the market.

However, since a change in 2003, multiple companies can be get first-to-file status as long as they submit their applications on the first day possible, meaning they share the exclusivity period. Increasingly, several generic companies are applying to make generic versions of the same kind of drug, diminishing the incentive and the return on investment.

In 2019, 14 brand-name drugs had multiple generic first-filers, up from seven in 2013 and none in 2004, according to FDA data compiled by DrugPatentWatch.com for Bloomberg Law. In addition, 29 drugs have attracted more than 10 first-filers since 2006, including three last year.

“Companies are weighing the economic upside of making these challenges,” she said. “There’s just not enough benefit out there for generic filers right now because they’re not seeing the financial gain from getting on the market first.”

Other factors could be contributing to the sharp downturn this year.

One theory is that many of the international pharmaceutical companies, particularly those in India, are likely still dealing with major challenges due to the pandemic.

Another important element is an uptick in traditional pharmaceutical companies moving into the biotechnology space, which sparks a different type of patent litigation, Ferri said.

“Companies are very interested in immunotherapy, immuno-oncology, and all these antibodies and vaccines, and I think Covid is really increasing that interest and pushing companies into that area,” she said.