A health-care worker administers a Pfizer-BioNTech Covid-19 vaccine to a child at a testing and vaccination site in San Francisco on Monday, Jan. 10, 2022.
Photographer: David Paul Morris/Bloomberg

Black Americans overcame reservations about Covid-19 vaccines more rapidly than White people, according to findings that indicate access may be the biggest stumbling blocks to putting more shots in arms.

A study published Friday in the journal JAMA Network Open looked at how vaccine hesitancy evolved among a sample of Black and White U.S residents. While hesitancy rates were comparable when the vaccines first rolled out in December 2020. Black respondents indicated less wariness than White respondents about three months later.

Disparities in vaccination rates persist more than a year after the shots rolled out. A Kaiser Family Foundation analysis found that as of Jan. 10, 60% of White and Hispanic people had received at least one Covid-19 vaccine dose, compared to 54% of Black people in 42 states.

“If it’s not hesitance that’s explaining lower vaccine rates among Black Americans, it’s probably access barriers,” Tasleem Padamsee, lead author of the paper, said in an interview. “We need to switch our focus to be thinking about: What are the specific access barriers that are affecting specific groups and specific communities? And what do we do to alleviate them?”

The Biden administration has taken steps to ensure anyone who gets their vaccine also can get paid sick leave, free child care, as well as free Lyft and Uber rides to vaccination sites. But people may not know about those incentive programs. 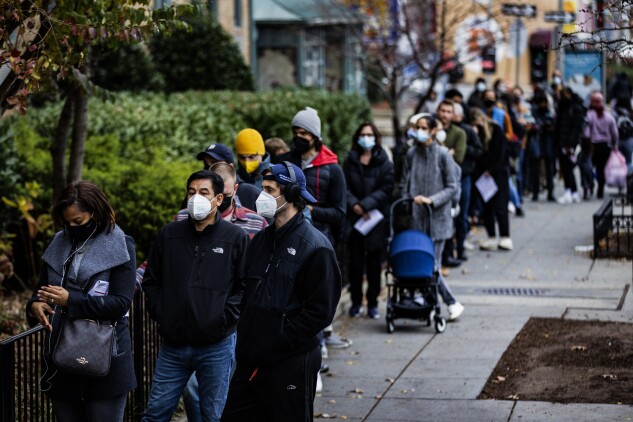 Padamsee, whose research as an assistant professor at Ohio State University focuses on social inequality and health care, led of team of researchers who surveyed 1,200 adults in the U.S. each month from December 2020 through June 2021. Survey participants self-reported how likely they were to vaccinate, using a six-point scale with six meaning they’re extremely likely to get the shot. Starting in April, researchers also asked if participants received their vaccinations. 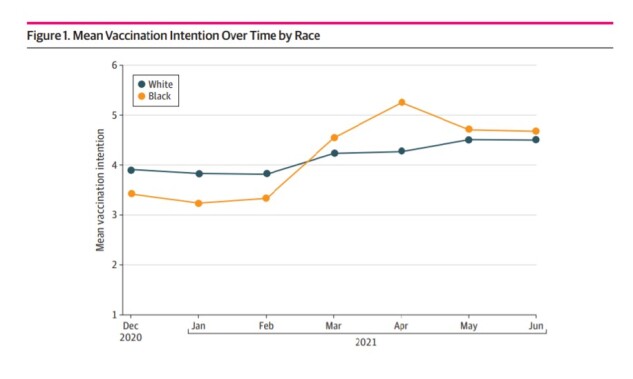 Peoples’ beliefs about the safety and efficacy of vaccines for themselves and their communities are closely associated with a willingness to get the shot, Padamsee said. By surveying the same people repeatedly over six months, she and her study team could see how those beliefs changed over time.

“Black Americans came to believe that the vaccine was necessary to protect themselves in their community, more than White Americans, over this time,” she said. “That is probably why Black Americans made so much progress in terms of their willingness to get vaccinated.”

The biggest jump happened between February and April. Padamsee said it’s hard to know why that happened, but the time period correlated to when vaccines became more available to the general public. Local organizations, news outlets, and health-care providers also started to put out more information about vaccinations.

“Americans, in general, were just learning in those months about vaccines.”

That jump highlights a key finding from the study among the Black respondents—initial hesitation followed by a surge in an intent to vaccinate likely stems from the desire to protect the community, Padamsee said. She noted that the pandemic has disproportionately impacted communities of color as Black Americans are 2.6 times more likely to be hospitalized and 1.9 times more likely to die compared to White Americans, according to CDC data.

“The same instinct that makes you want to protect yourself from something that’s maybe new and not well understood at the beginning could make you want to go ahead and get vaccinated later, once you have the information and you realize that it’s safe,” she said. “I think that’s what’s happening over these months.”

About 63% of eligible Americans are fully vaccinated, and 75% have gotten at least one dose, according to data from the Centers for Disease Control and Prevention. With a quarter of Americans are unvaccinated, research needs to continue to understand why that’s happening, Padamsee said.

“But that’s not all we need to do,” she said. “If we assume [vaccine hesitancy] is all that’s going on, we’re going to miss some people who are probably easier to get because they’ve already decided that they want the vaccine. They just can’t get to it.”