A smoker is engulfed by vapors as he smokes an electronic vaping machine during lunch time in central London on Aug. 9, 2017.
Photographer Tolga Akmen/AFP/Getty Images

The U.S. government’s effort to crack down on vaping has stalled as President , under pressure from the industry and conservative activists, has reconsidered his health secretary’s proposed ban on nearly all flavored products.

Some administration health officials thought they had settled on a final, revised plan about two weeks ago, according to a person familiar with the process. But the White House never signed off, and the plan has now been delayed yet again. Trump promised a “big paper” this week on vaping, but the White House hasn’t issued any such document.

Trump said Monday that he would meet with both vaping proponents and medical professionals who support strict regulation. But no such meetings have happened, and industry and health groups said they haven’t yet been invited to the White House. 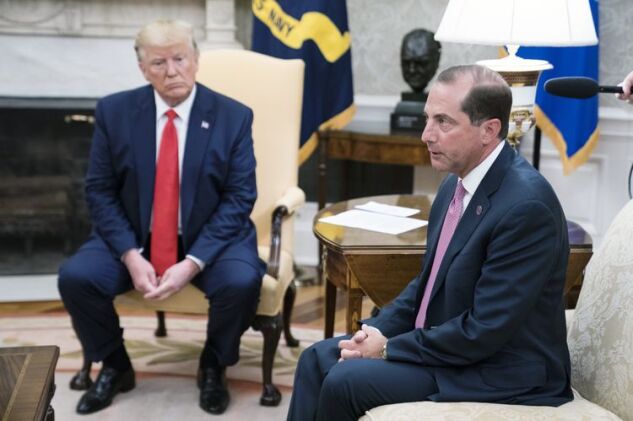 Alex Azar speaks during a press conference on vaping in the Oval Office on Sept. 11.
Photographer: Sarah Silbiger/Bloomberg

Health and Human Services Secretary , standing by Trump’s side in the Oval Office, announced in September the administration would ban all flavors other than tobacco, to curb use by kids. But an outcry by conservative anti-tax activists and vape shop owners led Trump to rethink the ban.

As it considers the fate of the proposed regulations, the administration is weighing a mix of factors including children’s health, the small businesses that are the foundation of the industry and the decision by , the maker of the biggest-selling vaping device, to voluntarily stop and , according to an administration official. The official said that education, to curb youth vaping, and enforcement of age restrictions on sales of the products are likely to emerge as key pillars of any final regulation.

But proponents of a ban are growing frustrated.

“With every day of delay, our kids are picking up these products and becoming addicted,” said , the director of federal relations for the American Cancer Society Cancer Action Network. “We want Congress or the FDA to permanently remove the flavors from the market that we know are used to target kids, and act in the interest of public health.”

The person familiar with the matter and the administration official both asked not to be identified discussing an internal debate.

“President Trump and this administration are committed to responsibly protecting the health of children,” White House spokesman Judd Deere said in an e-mail. “At this time, we are in an ongoing rulemaking process, and I will not speculate on the final outcome.”

Opponents of strict regulation have made a public health argument of their own: that vaping is far less harmful than cigarette smoking and has enabled many former smokers to wean themselves off of tobacco products. Industry advocates have warned that a wide-ranging ban would close stores, put thousands of people out of work and drive adult vapers back to cigarettes.

Trump has said he’ll raise the legal vaping age to about 21, but hasn’t detailed other moves. The White House has signaled that vape shops would be exempt from any new e-cigarette rules.

Meanwhile, U.S. health officials are increasingly concerned about a mysterious lung ailment that’s afflicted vapers. The Centers for Disease Control and Prevention said that as of Wednesday it had identified 2,172 cases of the illness and that 42 people had died in 24 states.

The CDC and the Food and Drug Administration have advised people to stop using vaping products while they investigate the condition.

, president and chief executive officer of the Campaign for Tobacco-Free Kids, said vaping is a health crisis that demands decisive action.

“Anything that exempts any particular retailer, or allowed any flavored products to remain on the market, will not work,” he said. “Unfortunately, it appears politics have intruded on public health.”

The CDC also said this week that cigarette smoking among adults fell to an all-time low of 13.7% in 2018, with 3.2% of adults who used nicotine products last year choosing e-cigarettes.

Under Azar’s plan, all flavors other than tobacco would have been removed from the market, though companies could apply to return them to shelves. Now, the administration looks headed for a compromise plan that would try to address a series of vaping-related deaths and underage use without enacting the full scope of Azar’s proposed ban on all flavors except tobacco -- a prohibition that vape stores have said would close their businesses.

Regardless, the administration changed plans earlier this month. On Nov. 5, it abruptly planned meetings with vaping industry representatives, including some who had scheduled only four days earlier.

This week, the FDA’s top-ranking tobacco regulator that the agency is waiting for the White House to make a final decision about possible new curbs on flavored vaping products. “There is no final answer as of now,” , the official, told senators on Wednesday.

The same day, Azar said the administration was looking to strike an “appropriate public health balance” with any regulation.

“How do we ensure that adults have access to e-cigarettes who need to wean off of combustible tobacco, but how do we prevent kids from getting addicted?” Azar said in a speech, reflecting the central tension in the debate.

Trump has recently talked more about the importance of preserving jobs in the industry -- a signal that pro-vaping lobbyists are having some success heading off a ban. His administration has said the Department of Health and Human Services doesn’t actually have jurisdiction over vape shops, only e-cigarettes.

To contact the editors responsible for this story: at awayne3@bloomberg.net