President Donald Trump speaks during a news conference in the Rose Garden of the White House in Washington, D.C., March 13, 2020, declaring a national emergency over the coronavirus outbreak to allow for more federal aid for states and municipalities.
Photographer: Andrew Harrer/Bloomberg via Getty Images

President declared a national emergency on Friday over the coronavirus crisis, as he announced a set of measures to address a shortage in testing kits and cushion the economic fallout from the outbreak.

Trump’s tone was somber. He warned the virus’s impact “could get worse,” adding that “the next eight weeks are critical.” 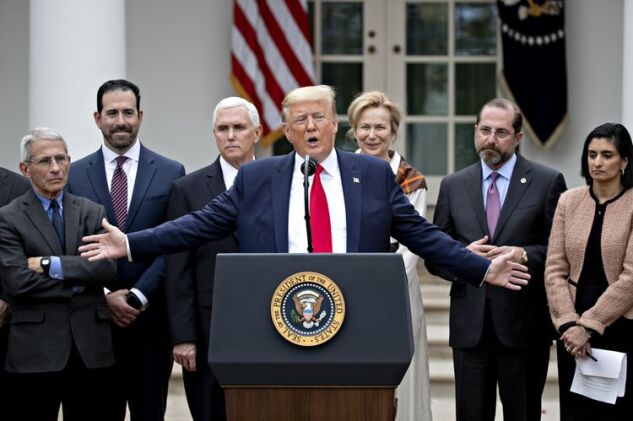 Donald Trump at a news conference in the Rose Garden of the White House on March 13.
Photographer: Andrew Harrer/Bloomberg

U.S. stocks reacted positively to the announcement. The S&P 500 climbed more than 9%, the most since 2008, providing some respite after stocks’ worst day since 1987 earlier this week.

The emergency declaration allows Trump to marshal additional resources for states and municipalities to combat the virus. It also marks a symbolic turning point for the president, who had repeatedly compared the coronavirus to the seasonal flu and insisted that his administration had the outbreak under control.

“This pandemic has the potential to cause severe consequences for our country’s national and economic security,” Trump wrote Friday in a letter to several top administration officials about the emergency declaration.

Despite being in close proximity to at least one person who tested positive for the virus, the president said that he’s experiencing no symptoms of the illness and has no plan to self-quarantine. Others -- including Senator of Florida and Senator of South Carolina, who were in contact with the same infected person -- also have no symptoms but have taken the advice of medical experts to isolate themselves.

Trump, though, said he’d probably be tested for the virus “fairly soon.”

The president also addressed widespread criticism that the government has fumbled the distribution of test kits, announcing what he called a new partnership with the private sector to test for coronavirus.

On the government’s failure to provide sufficient test kits across the country, Trump said: “I don’t take responsibility at all,” adding that his administration has had to redesign the public health system around the circumstances of the outbreak.

“We want to make sure those who need a test can get a test,” Trump said. He estimated 5 million tests would be available within a month, but said he doubted so many would be needed. He encouraged people who weren’t showing symptoms to refrain from seeking a test.

After he spoke, House Speaker said she had reached a deal with the Trump administration on legislation to help Americans deal with the virus and said the chamber will vote on the measure soon.

During his news conference, before the agreement was reached, Trump criticized Democrats, saying “we just don’t think they’re giving enough” on a bill proposed by the House this week to help address the crisis.

Part of the partnership Trump announced was done in collaboration with ’s Google, which will help direct potentially infected people to drive-through test sites at locations including Walmart and Target parking lots.

Senate Democrats had urged Trump to invoke the Stafford Act and other disaster declaration requests they say would free up more than $42 billion in funding for states available in the Disaster Relief Fund.

Trump said his declaration would open access to as much as $50 billion.

Trump also said he was waiving interest payments on all student loans held by federal government agencies until further notice, and he instructed Energy Secretary to buy “large quantities of crude oil” for the U.S. strategic petroleum reserve.

“The price of oil went down quite a bit, so we’re going to fill it up,” Trump said.

Trump said he was also conferring new authority to Health and Human Services Secretary , enabling him to waive regulations and parts of laws -- such as hospital stay limits and state medical licenses -- to give hospitals and health care providers maximum flexibility.

(Updates with letter in sixth paragraph.)