Multiple generic drugmakers are seeking to be first to file applications for cheaper versions of a brand-name drug.
Photographer: Dhiraj Singh/Bloomberg via Getty Images

Generic drugmakers are increasingly lining up to bring competing versions of brand-name products to the market at the earliest possible date.

It’s no longer just one company seeking to be the first to bring a generic to the market—a status that affords drugmakers 180 days of market exclusivity. Instead, multiple companies are simultaneously seeking and sharing that first-filer status, spurring more litigation for brand-name drugmakers that must then defend their patents.

The trend is growing as the pharmaceutical industry faces increased government pressure over drug pricing and transparency. It raises concerns over whether the current system is working for drugmakers and consumers.

In 2019, 14 brand-name drugs had multiple generic first-filers, up from seven in 2013 and zero in 2004, according to Food and Drug Administration data compiled by DrugPatentWatch.com for Bloomberg Law. In addition, 29 drugs have attracted more than 10 first-filers since 2006, including three last year.

The uptick raises questions about the utility of first-filer status. If dozens of companies obtain it, what is the point of sharing 180 days of exclusivity with so many competitors?

But pharma lawyers say some generic companies are avoiding competing in that market because they won’t profit.

Other generic companies are starting patent fights they don’t intend to finish, lawyers say, because they would rather strike deals to end the litigation and get paid to stay off the market altogether. That ultimately leads to fewer cheaper drugs for consumers.

“Competition is good, but at the end of the day, a lot of this trend may be driven by hopes for a settlement,” said Michael Carrier, a professor of intellectual property law at Rutgers Law School.

The settlements are often referred to as pay-for-delay or reverse payment deals, in which brand-name companies compensate a generic firm for staying off the market or delaying entry of a lower-cost drug. 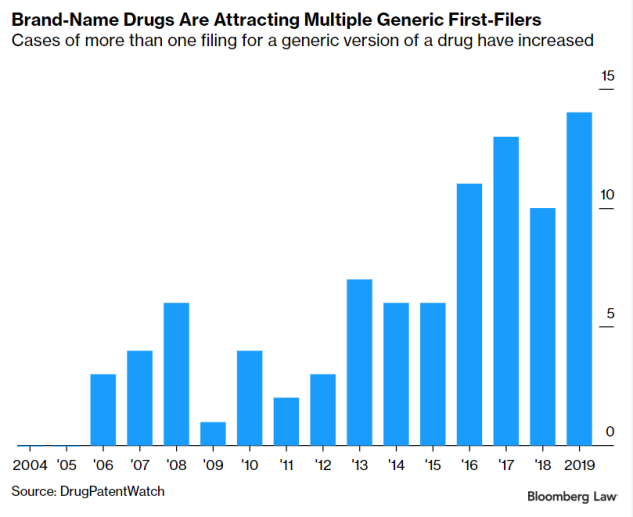 At issue are generic versions of drugs known as “new chemical entities”—brand-name medications that contain a novel active ingredient. Generic drugmakers are increasingly applying for first-filer, or NCE-1 status, to make their own versions.

For example, 18 companies last year sought to make generic versions of Rexulti, an antidepressant by Otsuka and Lundbeck. In 2016, 25 generic drugmakers filed abbreviated new drug applications, or ANDAs, with the FDA for the right to be one of the first to produce versions of Bristol-Myers Squibb’s anticoagulant, Eliquis.

Most novel drugs are assigned a date that is exactly four years after they receive FDA approval. That date is the first chance for generic drugmakers to file for NCE-1 status.

Until 2003, just one drugmaker—the first to file—would receive 180 days of exclusivity.

“There frequently used to be people camped out in FDA’s parking lot” on that first day seeking that first-to-file status, said Karin Hessler, assistant general counsel for the Association for Accessible Medicines, the generic drug industry’s lobbying group.

The 2003 change allowed multiple generic drugmakers to obtain that status, as long as they filed their ANDAs on the first possible day, Hessler said.

In addition, the FDA issued guidance in 2014 allowing combination drug formulas with at least one novel active ingredient to receive NCE-1 status.

One of the main factors driving the uptick in NCE-1 filers is basic growth in the industry , said Blake Coblentz, co-chair of Hatch-Waxman and biologics litigation for Cozen O’Connor in Washington.

“You’ve seen a lot more generic companies from foreign markets, such as India and China, start up and start competing,” he said. “There used to be fewer pharma companies, now there are a lot more.”

When a blockbuster drug is involved, “a lot of generics are probably going to throw their hat in the ring,” Ropka said. “Is that better for consumers, knowing there’s a possibility that there’s a rush to get generics to market? Yes.”

That might lead to multiple patent fights against the brand company, potentially paving the way for more competition if any of those challenges succeed.

“When you have 30 challenges on a patent, then there are potentially 30 different shots on goal to invalidate the patents,” said Vishal Gupta, a New York-based partner with Steptoe & Johnson LLP. “If all relevant patents are found invalid, then at least all first-filing generic companies could come to the market at the same time. You would immediately get substantial competition in that event.”

But consumers could be harmed if the majority of the resulting litigation is resolved through settlements. That keeps competition down, Carrier said.

“If all of these generics are just filing ANDAs just to get paid off by the brand company, there would not be a generic entry for a significant period of time,” he said. 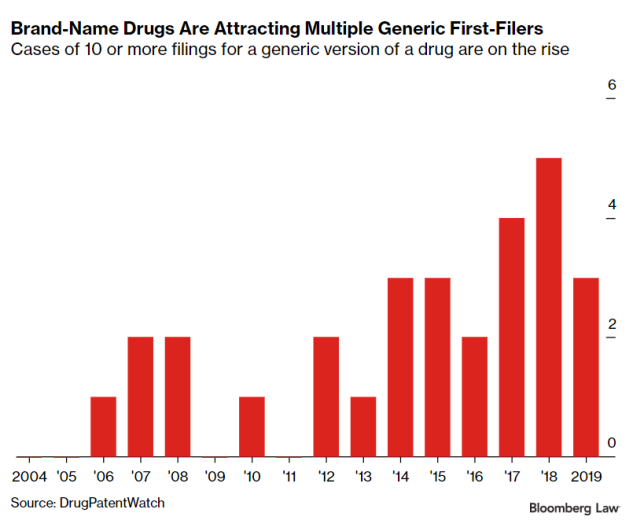 For the brand-name companies, these patent fights have gotten more expensive, often occurring in multiple venues with different legal challenges on validity and questions of infringement.

“It does increase the complexity and the cost of litigation because the innovators now have multiple fronts on which to fight,” said Scott Burwell, a partner with Finnegan.

Even generic drugmakers are unhappy about the increase in first-filers.

“Generally [generic] clients see it as a negative if they file an ANDA on the NCE-1 date and learn there’s another 8, 10, or 15 filers. That changes their calculus,” said Gary Hood, a Chicago-based partner with Polsinelli. “They may not view this as the opportunity they thought it was.”

It’s led to more smaller players jumping in to be first-filers on profitable drugs, which “would suggest the bigger players don’t want to share the market with anyone else,” said Liane Peterson, a partner with the intellectual property practice of Foley & Lardner LLP.

“They’ve started looking at harder-to-make drugs, such as injectable products, because they stand to do better on those particular products and there’s going to be less companies that will be able to make those,” he said.

A different type of incentive system could work better for consumers, according to a new paper published in the UK-based Journal of Economics & Management Strategy. Researchers built economic models to simulate how the market would respond to different numbers of generic challengers.

The paper, by University of East Anglia professors, suggests the U.S. switch to a system that grants 180 days of exclusivity to the first company to successfully challenge a patent—rather than all of the first filers.

Such a change would weed out generic drugmakers seeking to profit off of pay-for-delay deals and create a stronger incentive for companies that are serious about producing cheaper drugs, lead author Farasat Bokhari said.

“If a branded firm pays the generic firm to stay out of the market and they accept the deal, what stops the next generic drug maker knocking on the branded firm’s door, looking for a similar payoff?” Bokhari said.