The fear is palpable in California’s largest state-run psychiatric facility. It’s crept in with every whisper of a new Covid-19 diagnosis, filling the space left behind by each khaki-clad patient who was led away to a segregated area for the sick.

“I don’t want to die in here with the coronavirus,” said José Marin, a patient at Patton State Hospital in San Bernardino. He was found not guilty by reason of insanity in an arson case 10 years ago.

An advocacy group asked a judge to release as many as half the patients housed in Patton after a dramatic rise in Covid-19 cases, according to a court filing alleging patient protections against the virus are grossly inadequate. Many patients have already been evaluated as “eligible for discharge,” yet remain in custody, according to a motion filed Monday.

The case is part of a national trend of outbreaks hitting a vulnerable and largely overlooked population: People with mental health disorders who are locked up, often in underfunded mental health facilities that are breeding grounds for the disease.

Disability Rights California initially filed the class-action in August against the operators of the 1,527-bed Patton State Hospital and the director of the California Department of State Hospitals.

Late Monday, the group filed a motion for a temporary restraining order. Cumulative cases rose from 151 on Oct. 24 to 335 by Dec. 14, according to state data compiled by Disability Rights California.

“Many high-risk patients who can be safely discharged to safer and less crowded settings remain trapped in what has become a tinderbox of infections,” plaintiffs’ lawyers wrote in the motion. 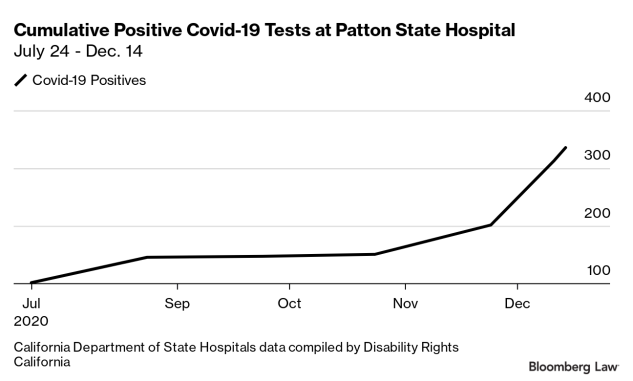 California’s Department of State Hospitals filed motions to stay and dismiss the plaintiff’s latest request, stating the agency doesn’t have the authority to discharge patients without action by the court that committed each patient.

A critical element of that court intervention—which can take months—is to give authorities time “to determine if sanity has been restored, which means the applicant is no longer a danger to the health and safety of others, due to mental defect, disease, or disorder,” according to the defendants’ motion to dismiss.

All of the patients cited in the plaintiff’s motion were committed for criminal offenses involving “violence against others,” according to the motion to dismiss filed by California’s DSH. “The purpose of committing an insanity acquittee is two-fold: to treat his mental illness and to protect him and society from his potential dangerousness.”

The facility continues to have roughly 50 patients per unit during the pandemic, with many sharing rooms, California officials confirmed. They didn’t comment on the litigation.

Covid diagnoses and deaths have occurred at psychiatric facilities around the country.

Lawyers in Massachusetts focused on Tewksbury State Hospital, a facility where many patients “do not have criminal involvement and are being held civilly,” said Mark N. Rudolph, a psychiatrist who provided an affidavit in support of the plaintiffs, and who has worked with patients in DMH-run inpatient and outpatient settings.

Even voluntary patients have difficulty being discharged from Tewksbury, according to court filings.

“At times, DMH Discharge evaluations are overly conservative,” Rudolph said in his affidavit. “DMH patients who are ready to live in the community are often faced with an excessive number of hurdles before they can be approved for discharge.”

One Tewksbury patient, whose name was redacted from their affidavit, said the hospital “isn’t doing much in terms of Covid,” noting two of the patient’s friends died of the disease earlier this year.

“I am bitter about these deaths,” wrote the patient, who had been in the facility for roughly 18 months following a suicide attempt. “I wonder if the patients got transferred or attended to earlier, they might not have died.”

DMH officials in Massachusetts declined to comment on the litigation.

Advocates in Connecticut brought a similar case in May, alleging violations of the Americans with Disabilities Act and “grave risks” to patients at two state inpatient psychiatric facilities—Connecticut Valley Hospital and Whiting Forensic Hospital. Lawyers are seeking to have all patients assessed to determine who can be safely discharged.

Psychiatric facilities around the country are uniquely vulnerable to the spread of infectious disease, wrote Gregg Gonsalves, an epidemiologist at Yale School of Medicine and School of Public Health, in an affidavit supporting the lawsuit against public psychiatric hospitals in Massachusetts.

“Congregate settings face special, extraordinary challenges in containing outbreaks,” Gonsalves wrote. “Without reducing the facility population, it will be almost impossible to stop an epidemic.”

The report includes survey responses from eight large operators of behavioral health and addiction treatment facilities, covering 376 inpatient or residential facilities in 40 states and Puerto Rico. More than half of those facilities had at least one case of Covid by August, while 14 percent had 10 or more cases, according to the report.

The report also found limited testing capacity and that most of the large behavioral health providers don’t systematically report COVID-19 data to federal officials. And providers reported not being able to perform routine Covid-19 testing on individuals.

“Without more information, it is impossible for public health authorities to appropriately direct resources,” the report states.

Marin said he had nowhere to escape to when his roommates at Patton started coughing and showing signs of Covid—it was “a nightmare.”

At Patton, patient testing is based on the circumstances, DSH officials said.

“If a unit goes on quarantine, all patients and staff are serial tested,” an agency spokeswoman said in an email. “If a patient resides on a non-quarantine unit, but is experiencing COVID-19-related symptoms, they will be tested. Surveillance testing is also done regularly on units with medically fragile patients and for patients with high-risk medical conditions.”

In addition, hospital staff who work on patient units will be required to participate in daily Covid-19 testing starting Wednesday.

Ervin Longstreet, a patient at Patton, said the facility didn’t start providing masks until the summer, and even then, they all shrank after one wash and no longer fit properly.

“These guys are scared,” he said. “No one knows who’s going to end up with the virus next. Every week someone on this unit is getting diagnosed.”

Longstreet, 50, has been held involuntarily since he was 37, following an assault charge that resulted in a finding of not guilty by reason of insanity.

He contracted Covid less than two weeks after speaking to Bloomberg Law, according to his lawyers. They said he is high risk for complications from the virus, because he is a Black man with hypertension, high cholesterol, and a high body mass index.

Many patients in Patton aren’t getting out, despite being found to be ready for discharge—including Longstreet, according to the plaintiffs’ motion.

“The data suggest that the steps that DSH has taken to reduce the impact of Covid-19 at the facility are inadequate, or that the crowded congregate setting itself (without sufficient social distancing, poor ventilation, etc.) makes the facility unreasonably dangerous for patients at high risk for severe Covid-19 illness, or (most likely) both,” said Dr. Peter Chin-Hong, an infectious disease expert, in an affidavit supporting the plaintiffs.

A lawyer representing the patients at Patton said in an affidavit that she’s aware of at least 10 deaths at the facility. For privacy reasons, the state is only reporting fewer than 11 deaths without providing an exact number.

Anne Hadreas, lead attorney on the case for Disability Rights California, said prisoners are getting treated better than psychiatric patients.

“The patients in psychiatric hospitals, who are not there for punishment, are all but forgotten,” she said. “Our clients deserve nothing less than the same protections.”

In addition, the agency wrote to the Office of the Public Guardian in 12 state counties, asking officials to collaborate to discharge patients “who have worked hard with their treatment team to return to the community” because they “should be timely discharged to a less restrictive environment.”

In the meantime, patients aren’t just concerned about Covid—they’re struggling to maintain their mental health. Without group therapy, classes, and meetings of Narcotics Anonymous and Alcoholics Anonymous, there is little to look forward to, Longstreet said.

Marin agreed, noting, “We have nothing going on. We are in our rooms most of the time; we have no social distancing at all.”

“Groups are still being offered to patients, but are done on the patient’s home unit to ensure safety and reduce the risk of cross contamination,” a DSH spokeswoman said via email. “If group treatment cannot be offered, patients are offered alternative treatment modalities and the hospital works on continuing to provide treatment.”