California settled last year with Teva Pharmaceuticals for $69 million for paying a drugmaker to keep a generic version of the narcolepsy drug Provigil off the market, a much-criticized practice blamed in part for the at-times astronomical cost of some pharmaceuticals.

While California’s attorney general touts it as the biggest state settlement ever reached for so-called pay-for-delay deals, it only accounted for about 6% of the $1.1 billion in revenues reaped by Provigil in 2010. Seemingly low-ball agreements like these are not uncommon, according to a Bloomberg Law analysis of legal settlements from 2013 through 2019.

“It’s incredibly frustrating because even though these dollar amounts sound large, it’s merely a cost of doing business for these drug companies,” said Sally Hubbard, director of enforcement strategy at the Open Markets Institute and a former assistant attorney general in New York State’s Antitrust Bureau.

In addition, Sen. Amy Klobuchar (D-Minn.), who is running an uphill campaign for the Democratic nomination for president, has sponsored legislation that would end the practice with Republican Sen. Chuck Grassley of Iowa.

State and federal law enforcement officials have entered into more than a dozen settlements with drug companies accused of anti-competitive, pay-for-delay behavior since the 2013 U.S. Supreme Court case FTC v. Actavis, which found pay-for-delay was illegal in many cases.

But the majority of the civil settlements have relatively low or no financial ramifications for the alleged bad actors, causing many lawyers to question whether government enforcement is actually deterring illegal behavior.

“Any one of these settlements, even at the high end, is nothing more than the fee for the license to break the law—where the companies can basically calculate the potential for getting caught and put a high-end dollar value on the penalty so they can calculate whether to take the risk,” said Reuben Guttman, an antitrust lawyer and founding partner with Guttman, Buschner & Brooks who has litigated anticompetitive behavior in the pharmaceutical industry.

Guttman said he has never seen a drug settlement that “has had a serious deterrent value.”

“Enforcement of the Actavis standards is already deterring patent settlements that might delay access to generics and biosimilars,” said Jeffrey K. Francer, senior vice president and general counsel for the Association for Accessible Medicines, an industry group representing generic drugmakers.

However, the Actavis decision also held that reverse payment deals aren’t automatically presumed to be anti-competitive. Instead, the plaintiffs in such cases must show that the defendants are actually engaged in anti-competitive behavior on a case-by-case basis.

One settlement between enforcers and drugmakers stands out: The $1.2 billion agreement last year between the Federal Trade Commission and Teva over the company’s pay-for-delay deal for Provigil.

That dollar amount was the highest ever in such a case, and notable because the federal government sought a payout from the drugmaker over alleged anti-competitive conduct.

Even though it was a high-value settlement for the federal government, it still only accounted for roughly one year of revenues for the drug.

None of an additional nine settlements the FTC has reached with pharmaceutical companies over pay-for-delay since 2013 had any payments attached to them.

Instead, the FTC has focused its enforcement efforts on having the companies agree to injunctions—ranging from 10 years to permanent—and corporate integrity agreements that preclude drugmakers from engaging in the same kind of anticompetitive behavior. 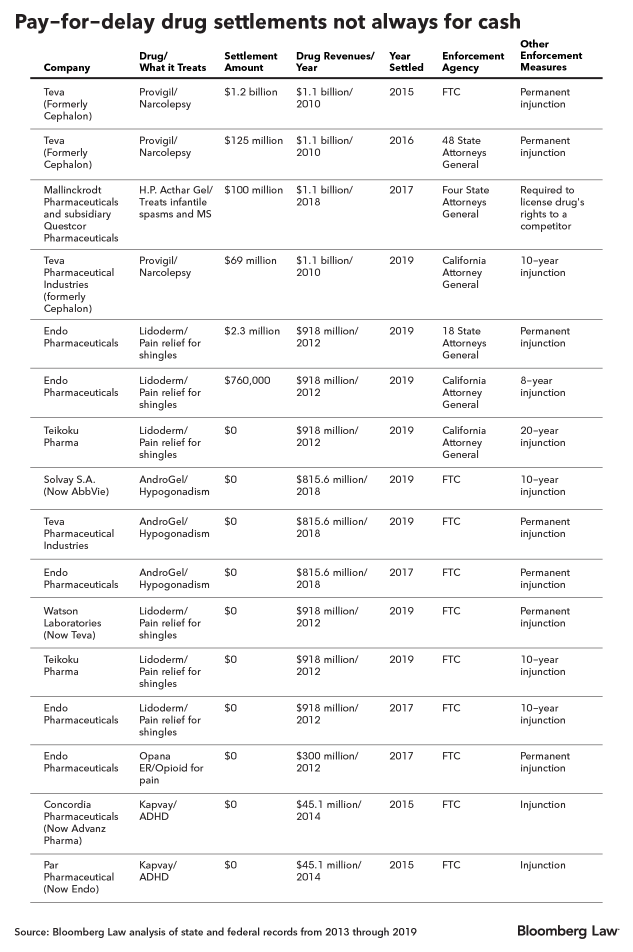 “My experience is that you find companies fight more over whether they’re going to be subject to a corporate integrity agreement than they do over a dollar” amount, said Michael J. Moore, an attorney with Pope McGlamry and a former U.S. Attorney for the Middle District of Georgia.

“To a big multibillion-dollar international company, $100 million isn’t going to deter them,” Moore added. “It’s like swatting a dog with a newspaper. What they don’t want is a choke collar put on them, which is that corporate integrity agreement.”

And that approach may be working.

Federal data shows a decline in improper pay-for-delay agreements between brand-name and generic companies following FTC v. Actavis, going from 15 in 2013 to one in 2016, a shift that federal officials attributed to the 2013 Supreme Court decision, according to a 2019 press release.

“By the FTC’s own data, no further regulatory standards for these settlements are necessary, and the FTC receives every single one,” said Francer of the generic drugmakers association.

“With patent litigation costing over $10 million per suit, the ability to settle litigation in a pro-competitive manner helps ensure earlier and more affordable patient access to generic and biosimilar medicines,” he said. “That is why in Actavis the Supreme Court held that FTC and the courts should weigh the pro-competitive and anti-competitive aspects of a settlement and soundly rejected the proposition that there should be an assumption that such settlements are anti-competitive.”

However, more current data isn’t available, so it remains unclear how many pay-for-delay agreements between brand-name and generic companies have occurred in the past three years—and some lawyers say federal enforcement actions have only pushed drugmakers to get more creative in how they structure the deals.

“Pay-for-delay is most certainly still happening,” said Michael S. Sinha, an attorney and physician who is a research fellow at Harvard Medical School. “The reason it’s not flagged as such in FTC annual documents is likely due to a narrow definition of ‘payment.’”

“FTC may need to revisit the criteria by which pharmaceutical patent settlements are scrutinized,” he added.

Pay-for-delay now manifests in creative and “insidious” ways, said Sinha, who is also a visiting scholar at Northeastern University School of Law’s Center for Health Policy.

In other examples, a generic drugmaker may also receive an exclusive license for a drug patents, which creates a period of duopoly, where there are only two competing products on the market and other generics are precluded from entry.

Alternatively, a brand manufacturer may also agree not to release its own generic version to compete with the generic drug company that it struck a deal with. Sinha said that also limits competition.

“In these scenarios, a generic manufacturer stands to benefit financially in the long run, even if the terms of the settlement involve payment from generic to brand,” Sinha said.

He cites AbbVie’s settlements over biosimilars for its Humira drug, which treats a variety of ailments, including arthritis, plaque psoriasis and ulcerative colitis.

AbbVie has more than 100 patents on Humira, creating what is often referred to as a “patent thicket,” meaning biosimilar manufacturers would have to overturn all of those patents or agree to settle with the brand-name company.

“AbbVie’s settlements [with prospective biosimilar companies] thus far have preserved an additional four-plus years of market exclusivity in the U.S., with global revenues estimated to exceed $20 billion for each of those years despite biosimilar entry in Europe,"Sinha said.

“Our patent settlements are pro-competitive, as they provide biosimilar access more than 10 years before our last Humira patent expires. They do not involve any payments or other inducements from AbbVie,” she said.

Settlement vs. Going to Trial

Some critics say federal and state law enforcement could obtain bigger payouts—resulting in a greater deterrent—if the cases were taken to court.

But that presents a challenge of resources, Moore said. When he was the U.S. Attorney for the Middle District of Georgia, he had an annual budget of $6 million for all civil and criminal enforcement actions.

“Often times that [civil] division is not just working on pay-for-delay cases, but they’re also working on the mail truck that ran over somebody’s dog,” Moore said. “They’re pulled in a bunch of directions. It’s like running a big law firm.”

At a large law firm, the lead attorneys have a team of more junior lawyers to do tasks such as document review and multiple paralegals to do other work. In a U.S. attorney’s office, it’s the lead attorney handling virtually everything from the top down, Moore said.

“I don’t think it’s laziness or incompetence or inexperience that causes this at the U.S. Attorney’s Office,” Moore said. “It is a resource issue.”

But there’s also a good reason that the federal government hasn’t pursued bigger payouts, said Bill Nettles, a former U.S. Attorney for South Carolina—where he had an annual budget of about $9 million.

“If you put a fine on them, you’re not going to put them out of business; all that does is drive up the price of the drug,” he said. “I don’t know what the answer is, but that clearly happens.”

California became the first state in the nation to target pay-for-delay in the pharmaceutical industry when lawmakers passed a law last year targeting the practice.

California’s Assembly Bill 824, signed in October, declares that any reverse payment is “presumed to have anticompetitive effects” under the state’s Cartwright Act—a major departure from the precedent established in the Actavis case. The new law imposes fines of up to $20 million per violation.

The Association for Accessible Medicines challenged the law in the U.S. District Court for the Eastern District of California. It sought a preliminary injunction based on alleged violations of due process, the dormant commerce clause, and the excessive fines clause, as well as preemption by federal drug laws.

“Laws that will limit the ability of generic and biosimilar developers to settle patent litigation with brand-name drug companies will delay patient access to more affordable medicines and limit pharmaceutical competition,” Francer said.

The judge rejected each of those claims and allowed the law to take effect as the case continues to work its way through the courts.