State attorney general races generally aren’t the kinds of elections that have voters up in arms. But West Virginia is proving to be the exception this year.

In a state that’s widely considered to be ground zero of the opioid crisis, Patrick Morrisey’s history as a lobbyist for the pharmaceutical industry and the relatively low settlements he negotiated with opioid distributors are working against him as he runs for re-election.

West Virginia House of Delegates member Isaac Sponaugle, one of two candidates seeking the Democratic nomination, said Morrisey has “literally fed the opioid crisis in the state” and has called the settlements reached with drug companies slaps on the wrist. Sponaugle’s opponent in the primary, Samuel Petsonk, said Morrisey’s “record on the addiction crisis is an absolute conspicuous and embarrassing failure.”

There are some signs the criticism is resonating with voters. Terra Tompkins, of Parkersburg, West Virginia, said the $84 million in settlement money is “a very big disappointment,” especially after seeing years of destruction wreaked by the massive influx of opioids in her community.

“It seems like he could have done a better job, based on what other states have done,” she said.

In some ways, the West Virginia race is obviously a one-off. It doesn’t affect the national political discourse. No other state attorney general came to a settlement as quickly as West Virginia, so there’s no other race with the same dynamics. And it would take a tremendous upset for a Republican to lose in West Virginia.

But as states across the country cope with the opioid crisis and seek to put settlement money to work to combat drug addiction and the related economic problems in their communities, the West Virginia story speaks to the ways voters are scrutinizing state attorneys general and the deals they’re making on consumers’ behalf. 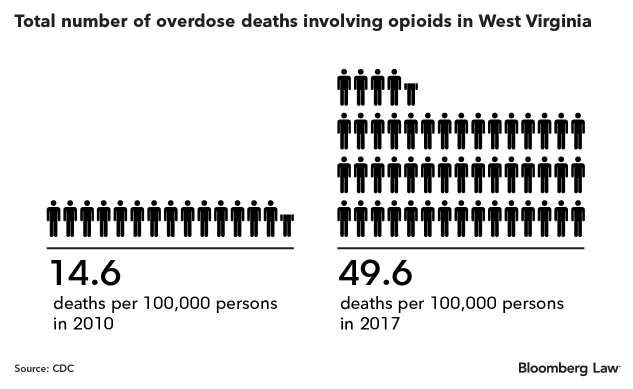 Morrisey defends his record and denies that his past profession has influenced his work on behalf of the state.

Since 2016, he has reached a total of $84 million in settlements with 13 different drug wholesalers and distributors, including $72 million, combined, from Cardinal Health, AmerisourceBergen, and McKesson Corp.

By comparison, two counties in Ohio just reached a deal with the same three companies for $215 million—nearly three times what Morrisey secured for his own state. The two Ohio counties—Cuyahoga and Summit—have a combined population of nearly 1.8 million, roughly the same as West Virginia.

“Any comparison between states is an apple and orange comparison,” Morrisey told Bloomberg Law. “The office’s more than $84 million in opioid-distributor settlements is exponentially more cash received at least 10 years faster than the state would have realized under terms of the proposed, national settlement.”

Morrisey was referring to various settlement proposals floated by attorneys general for several states in order to resolve sprawling multidistrict litigation brought by roughly 3,000 cities, counties and Native American tribes from across the country against the entire opioid supply chain. The multi-billion dollar proposals would involve payouts spanning years, or in some cases decades.

“Furthermore, the $84 million in settlements, all of which ensures that our state, counties and cities can obtain significant additional monies to remedy the scourge of opioid abuse and addiction,” he added. “We have placed West Virginia in a much stronger negotiating position.”

Morrisey added that his office has filed five new lawsuits last year against manufacturers “who helped fuel the opioid epidemic in West Virginia.”

However, many inside the state have been baffled and frustrated by how little they can do with the limited amount of funds he’s secured.

“What we are signaling to these companies by these measly settlements is that it is fine to do business in West Virginia where thousands and thousands of residents are left with substance abuse disorders and, worse, many have overdosed and died,” said Rahul Gupta, the former commissioner for the Bureau of Public Health in West Virginia.

The attorney general’s settlements “tend to be small and episodic, and they tend to be expended in a way that does not best serve the people of West Virginia,” Gupta added. “When the Amerisource Bergen settlement came out it was about $37 million and a third of it was taken by lawyers. But the rest of it went to constructing treatment beds, while the need to abate the crisis is much larger than that.”

The state had the nation’s highest rate of drug-overdose deaths, at 49.6 per 100,000 people in 2017, according to federal data. West Virginia also had the highest concentration of opioid pills imported into the state from 2006-2012, at a rate of 66.5 per person per year, or 853.5 million total, according to a database acquired by The Washington Post.

Rhetoric on Morrisey’s handling of the opioid settlements will “absolutely” help his Democratic challengers, said Patrick McGinley, a professor of law at West Virginia University.

“They’re going to strongly argue that Morrisey sold out the state and settled too cheap, and this is a very sensitive issue here because so many people have been touched by this epidemic,” McGinley said.

“It’s a potent argument and West Virginians will listen to it, depending on how Morrisey responds to it and whether his response is believable,” he added.

However, McGinley noted that it may be unfair to compare Morrisey’s settlements to those reached by other municipalities, because West Virginia was the first to test this kind of litigation in recent years.

Morrisey has done other work to address the opioid crisis that could shift attention away from the relatively low settlements he’s reached to-date, said L. Christopher Plein, professor of public administration at West Virginia University. 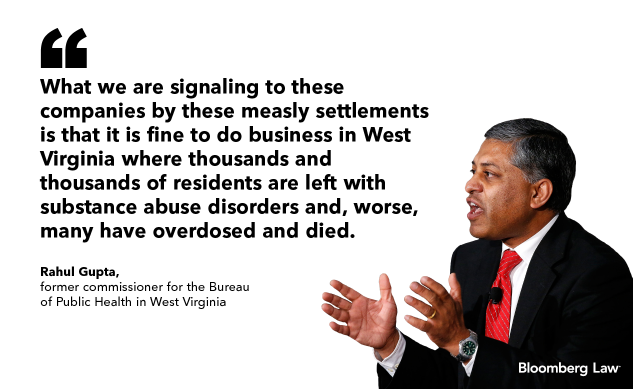 For example, Morrisey sued the Drug Enforcement Administration, pushing for a cut in the manufacturing of opioids—which have since decreased in volume. The attorney general also established a best-practices toolkit for prescribing and dispensing opioids.

Morrisey “has positioned himself in such a way that he is very cognizant of the substance abuse disorder issue,” Plein said. “That is one way he may be able to counter those charges.”

Morrisey was first elected in 2012, becoming the first Republican attorney general in West Virginia since 1933.

He was born in Brooklyn, New York, grew up in Edison, New Jersey, graduated from Rutgers College and received a law degree from Rutgers School of Law-Newark. Morrisey ran his own law practice for two years after law school until he got a job as the East Coast political director for the National Republican Congressional Committee in Washington, D.C.

He later became chief counsel for the U.S. House of Representatives Energy and Commerce Committee, focusing on health-care issues. In 2000 he lost a bid for Congress in New Jersey’s 7th Congressional District. He went on to work as a lobbyist in Washington, D.C. from 2004-2012.

As a lobbyist, Morrisey worked for King and Spalding, where he advocated on behalf of the Healthcare Distribution Management Association—now the Healthcare Distribution Alliance—which works on behalf of pharmaceutical manufacturers and distributors, according to federal lobbying records. He was also a lobbyist for Sidley Austin and Arent Fox, both of which represent pharmaceutical clients.

He also represented eight of the top 10 pharmaceutical and biotech manufacturers, according to a press releaseby his former employer. The group’s members include Cardinal, McKesson and AmerisourceBergen.

His former clients and employers have remained loyal since Morrisey left Washington, D.C., where he was a lobbyist, to run for office in West Virginia.

In addition, Morrisey’s wife, Denise Henry Morrisey, is a lobbyist and founding partner with Capitol Counsel, a Washington D.C. lobbying firm that represents many health care industry clients. She was a lobbyist for Cardinal Health from 1999-2016, while Cardinal was saturating West Virginia with the addictive drugs.

In 2017, Morrisey reached the state’s $20 million settlement with Cardinal, which poured more opiates into the state than any other company, according to the Post database. The company admitted no liability or wrongdoing as part of the deal, according to the settlement, obtained by Bloomberg Law.

Morrisey ran for U.S. Senate in 2018 and won the Republican nomination but ultimately lost to incumbent Democrat Joe Manchin, despite enthusiastic support from President Donald Trump. Morrisey collected more than $240,000 from lobbyists during his campaign, according to data from the Center for Responsive Politics. Nearly half came from his former lobbyist employers.

Many of his lobbyist-donors represented the pharmaceutical industry. For example, Brent Delmonte of BGR Group gave him $5,400. Cardinal Health was a client.

Despite criticisms of Morrisey’s settlements and past-lobbying work, the attorney general has one major advantage going into the upcoming election, said John C. Kilwein, the chair of the political science department at West Virginia University.

“I’m hard pressed to see a statewide Democrat win in West Virginia,” he said, though he acknowledged the pain of the opioid crisis “could be used as a leverage point” during the campaign.

While opioid addiction is an important issue in West Virginia, Morrisey has been on the right side of many other key issues that appeal to Republicans—including gun rights, and battling Obama-era regulations that made it tougher to burn coal, Kilwein said.

“We’ve shifted pretty far to the right,” he said. “We’re the state with the highest approval ratings for Trump. It’s clear what Morrisey has done in the way he’s attached himself to Trump. I think at the margins the lack of success of the opioids could hurt him, but I don’t think so.”