Medical advocacy groups are insisting that stronger commitments to improving clinical trial diversity be included in the next user fee deal between the Food and Drug Administration and drugmakers, which will establish industry’s top priorities for the next five years.

An updated proposal implementing the fees companies pay to help get their cutting edge drugs to market wouldn’t hold them accountable for broadening the pool of patients who enroll in studies, the groups say. The disproportionate Covid-19 case and death rates among Americans of color underscore the need to make sure clinical trials reflect the actual population affected by a particular disease or condition under scrutiny, they say.

Many drugmakers, however, say the user fee deal is the wrong avenue to address the issue. They argue that existing initiatives, like the Pharmaceutical Research and Manufacturers of America’s (PhRMA) industry-wide principles on clinical trial diversity, are already pushing companies to collect information on health inequities and address barriers to clinical trial access.

Once the FDA finalizes its proposal for the next reauthorization of the Prescription Drug User Fee Act (PDUFA), it must submit the plan to Congress for approval. The current version expires in September 2022.

The latest proposal includes plans for bringing more cell and gene therapies to market by increasing agency staffing and boosting communication with patients. Advocates say, though, that omitting clinical trial diversity goals from PDUFA will ultimately limit the benefits minorities and other groups could see from these innovative treatments.

The importance of reflecting diversity in the user fee agreement is “really embedding this in FDA’s practice,” said Henrietta Awo Osei-Anto, a director at the Milken Institute’s FasterCures. She added that the agenda-setting offers an opportunity to “reinforce and provide avenues for industry to address any challenges that they perceive with the FDA as they go through” the drug review process.

Fees paid by sponsors of new drug applications have helped fund the FDA’s drug review process since 1992. In exchange, the FDA outlines specific actions it will take to more efficiently evaluate the safety and efficacy of new treatments, including by issuing guidance documents on topics like evaluating real-world evidence in drug applications and carrying out trials with small patient populations.

PDUFA user fees can also ensure that the FDA goes beyond its recommendations for industry by distributing funding to help drug sponsors better collect trial diversity data and incorporate diversity principles within research.

“We want to make sure that the conversations are in areas where FDA staff and resources can be bolstered to make sure that data is being collected, data is being reported and any efforts are being put in place to encourage companies to increase diversity,” said Esther Krofah, executive director of FasterCures and the Milken Institute’s Center for Public Health.

User fees paid by sponsors of drug applications that require clinical data will grow from roughly $2.9 million in fiscal 2021 to $3.1 million in fiscal 2022, according to the FDA’s website. The 2022 fee for applications that don’t require clinical data will be around $1.6 million. Drug applicants pay an additional program fee, set at $369,413 for the next fiscal year.

The FDA released the proposed PDUFA VII commitments earlier this year following months of negotiations between the agency and industry stakeholders. The agreement covers fiscal years 2023 to 2027.

The agency said in a statement that it is reviewing public comments submitted on the proposed PDUFA VII agreement, and plans to “provide a summary and response in the coming weeks.” 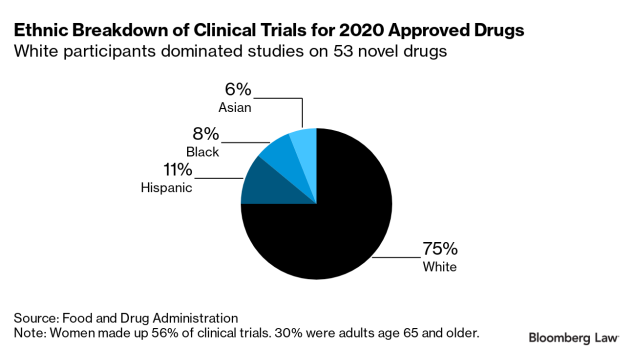 Data at a Glance

Demographic variables like gender, age, and race can all play a role in determining a patient’s health outcomes and their response to a particular treatment, researchers say. They add that having systems in place to implement diversity throughout the clinical trial process can help ensure a treatment achieves the highest efficacy rate possible.

But minority groups continue to be disproportionately represented in trials testing drugs to treat conditions like cancers and cardiovascular diseases, FDA data show.

Roughly 8% of participants in clinical trials for novel drugs approved by the FDA in 2020 identified as Black or African American, according to the agency’s Drug Trials Snapshots Report, lower than the approximately 13% of Black Americans within the U.S. population. Hispanic Americans accounted for 11% of 2020 clinical trial participants, despite making up about 18.5% of the nationwide population.

Several trials for drugs approved last year were dominated by white participants, even for conditions that are associated with disproportionate impacts for certain minority communities. Black men, for example, have been found to be more likely to die from low-grade prostate cancer, but accounted for one of the smallest ethnic groups represented in clinical trials for three drugs approved for the detection or treatment of prostate cancer in 2020.

“If you look at cardiovascular trials, if you look at oncology trials, what you will see across the board” is that “there are gaps in almost every disease,” Charlotte Jones-Burton, co-founder and president of Women of Color in Pharma (WOCIP), said.

The FDA has tried to help medical product manufacturers integrate more diverse populations within their research, but advocacy groups say the guidelines don’t have enough teeth.

Individual companies and trade groups have also outlined their own initiatives for improving gender, race, and age representation in clinical trials. PhRMA added a chapter to its Principles on Conduct of Clinical Trials in October 2020 specifically focused on enhancing trial diversity, including by addressing financial and location barriers that may reduce someone’s access to clinical trials.

A longstanding mistrust of medical research and lack of communication with minority groups, though, continue to be among some of the lingering obstacles to furthering trial diversity, policy analysts say.

Another challenge is that guidance issued by the FDA and individual medical product companies are nonbinding recommendations. While PDUFA diversity commitments would not necessarily be mandatory rules for drug developers, they would push the FDA to reward companies that incorporate agency guidance on diversity within the planning, conducting, and post-study review stages of clinical trials, advocacy groups say.

“What we do see are companies’ commitment, but they’re doing that one company at a time,” Krofah said. She added that PDUFA VII would help bring FDA and industry members together to ensure diversity “milestones” and “check marks are put in place.”

Including diversity goals within PDUFA “really does create this partnership between the industry and the agency to identify the resources needed to have sustainable change,” WOCIP’s Jones-Burton said.

Addressing diversity across the brand-name drug industry, though, will likely require a multi-pronged response from a variety of actors, PhRMA’s Mayne said.

“PDUFA is a great tool to help with addressing resourcing issues at FDA, but it’s not such a great tool for making changes at an ecosystem level,” he said.

“Clinical trial diversity involves many more stakeholders and many more aspects of the clinical research ecosystem than simply industry and FDA,” Mayne added.