Keep Her Awesome. Sleep Normal. Be the Boss of Your Asthma. Speak Your Migraine.

Each is the slogan of a marketing campaign designed to bring a medical condition or symptom--ranging from vaginal health to excessive urination--to the public’s attention.

The pharmaceutical industry spent $430 million on 410 disease-awareness campaigns in 2016, according to a study published in January in the Journal of the American Medical Association, with little oversight. They fall outside the Food and Drug Administration’s regulation of direct-to-consumer prescription-drug advertising as long as they don’t mention or promote a specific medication, and the Federal Trade Commission, which has the authority to act if campaigns are false or misleading, hasn’t intervened.

The industry says the campaigns, which it calls “help-seeking communications,” are intended to get people treatment. Critics say they’re aimed at creating a class of “worried well": people in generally good health who are induced to visit their doctor and get a prescription for a drug to treat the advertised ailment, often the one made by the company sponsoring the campaign.

“These campaigns lead to overdiagnosis and overtreatment and complications of treatment that you never would have gotten otherwise,” Michael A. Carome, a physician who is the director of Public Citizen’s Health Research Group, told Bloomberg Law.

“We oppose these types of campaigns,’' he said. “It’s disease mongering.”

Spending on disease awareness campaigns increased 143 percent, from $177 million in 1997, when direct to consumer drug marketing first began, to $430 million to 2016, according to the study published in JAMA. The number of these campaigns has also skyrocketed--from 44 in 1997 to 410 in 2016.

A current example of disease awareness messaging is the “Keep Her Awesome” campaign sponsored by Lupin Pharmaceuticals Inc. It’s aimed at getting women to seek treatment for vaginal infections. The campaign features taglines such as “Yep, she is your vagina and she’s not afraid to tell you when something’s off with her.”

It encourages women to talk to a health care provider about their symptoms to check whether they might have bacterial vaginosis (BV)--"the most common vaginal infection you’ve probably never heard of.” 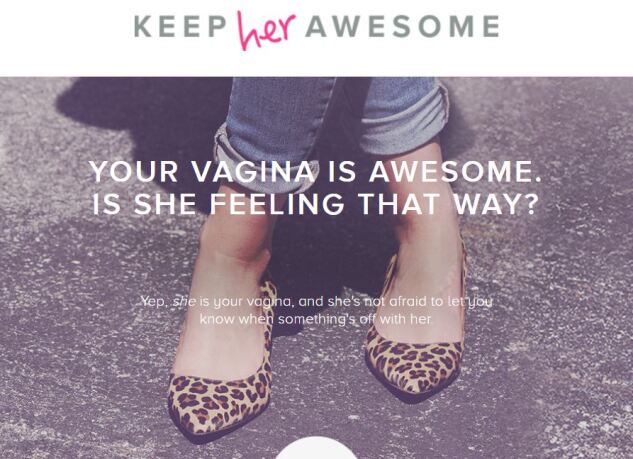 The site makes clear that it’s owned by Lupin. The consumer-directed information doesn’t mention any prescription drug treatments. It discusses older treatments for BV and lists various issues associated with them, like goopiness of gels and creams, nausea or metallic taste associated with some oral regimens, and the length of some of the treatment regimens.

Health-care professionals using the site, though, can click on a link that directs them to a branded site for Lupin’s Solosec (secnidazole), the first single-dose oral therapy for BV, which Lupin began selling in the U.S. in May 2018. Lupin launched the unbranded educational campaign about BV bacterial vaginosis five months later.

“It is a unique product in its category being a single oral-dose treatment to be taken one time to complete bacterial vaginosis (BV) treatment,” Pooja Thakran, vice president of corporate communications at Lupin Ltd., told Bloomberg Law. “The ‘Keep Her Awesome’ campaign was aimed at creating focus on educating and empowering women to take control of their gynecologic health.”

In some cases, patient advocacy groups as well as the doctors and patients featured in disease awareness campaigns receive payment from the pharmaceutical company sponsoring the campaign. For example, a writer whose articles about anxiety are on Allergan Inc.'s “Actually She Can” unbranded female empowerment campaign is listed as a “paid influencer” for Allergan Inc. Allergan has a wide array of medical products aimed at women including aesthetics products like Botox.

There are no requirements that the person, group, or company paying for the ad campaign to disclose ties they might have to industry or an industry-related group, Public Citizen’s Carome said.

The FDA has backed away from regulating disease awareness campaigns since sustaining significant court losses on its promotional policies in recent years, most notably in a case involving the drug company Amarin Pharma Inc.

In that case, the Amarin sued the FDA, saying its rules on the promotion of drugs for unapproved uses was unconstitutional because it violated the First Amendment. The FDA wound up settling when a court said the plaintiffs made enough of a preliminary argument to show they could win the case.

“FDA and FTC are steering a wide berth,” because of these cases in which the courts said the First Amendment protected the commercial free speech rights of drug and device product manufacturers, said Marc J. Scheineson, a former assistant FDA commissioner.

The First Amendment broadly protects all types of communications about specific products or disease states, even if it is paid for by product manufacturers, as long as the speech is truthful and not misleading and involves a legally marketed product, he said.

An FDA spokeswoman confirmed that genuine awareness campaigns aren’t in the purview of the agency. “Non-branded disease awareness communications that only discuss the medical condition but do not promote a specific prescription drug or make any representation or suggestion concerning a particular drug are generally not subject to these FDA regulatory requirements” on prescription drug marketing, Stephanie Caccomo said.

The FDA does look at the ads on a case-by-case basis to make sure they’re about general disease awareness rather than promotion for a specific prescription drug, she said. If the FDA believes a disease awareness communication is false or misleading, the agency can refer the matter to the FTC.

The FDA issued disease awareness guidance in 2004 and then withdrew it in 2015.

The agency now is planning a research study on disease awareness communications on television. Caccomo said the information “will help us formulate best practices for stakeholders to consider when preparing materials that contain disease awareness presentations.” She said the FDA is still reviewing comments it received on the proposed study design last December.

“We have not yet started the study and cannot speculate on the length of time, as several factors, including participant recruitment, influence the length of the study,” she said. After the agency finishes reviewing comments, it will address the feedback in a future Federal Register notice and then begin the study.

Drugmakers, meanwhile, still are looking to the withdrawn guidance to determine how information about diseases can be used in ads without triggering labeling and advertising rules that require negative risk information and other factors to ensure they are fairly balanced, Scheineson said.

While there isn’t conclusive data available on the return on investment for these campaigns, anecdotal evidence suggests they work.

“Keep Her Awesome” is an example, according to Lupin.

From August 2017 to December 2018, 1.3 million patients and 69,200 health care practitioners visited the website, of which 74,700 patients and 1,700 providers took action on the site, Thakran said. The company had projected the target audience at 10 million women and 66,000 health professionals.

“The percentages of visits and conversions significantly exceed pharma industry averages,’' Thakran said. “‘Keep Her Awesome’ has been instrumental in creating awareness and ensuring we are on track to achieve the target set for Solosec.”

A 2005 trial looking at the influence of patient medication requests on the prescribing behavior of physicians showed that patients who said they watched TV programs about depression received more prescriptions for antidepressants than those who didn’t mention watching a program. And a separate study demonstrated a link between exposure to ads about low testosterone related to aging and an increase in prescriptions for testosterone medications.

The drug industry says such campaigns are squarely in the public interest and are aimed at getting people to see their health-care providers to discuss their condition and the negative consequences of the disease.

PhRMA, the trade group representing the brand-name drug industry, pointed Bloomberg Law to its comments to the FDA in 2018. "[D]isease awareness communications serve a vital public health function by educating consumers regarding various diseases or conditions,” it said.

“Such communications serve an important public health function by raising awareness among consumers, better informing those at risk for a disease or condition, and decreasing stigma among other members of society,” the group said.

Scheineson, the former assistant FDA commissioner, said disease awareness campaigns “are designed in part to seed the market’’ but serve a useful purpose.

“The information also facilitates more substantive patient discussions with treating physicians, and encourages patients to see their prescribers if they believe they have symptoms of the diseases being discussed,” said Scheineson, now a food and drug partner at Alston & Bird LLP in Washington.

The campaigns may lead people to seek treatment for symptoms like tiredness or nighttime urination that may just be parts of the normal aging process, William Tierney, professor and chair of the Department of Population Health at Dell Medical School at the University of Texas at Austin, told Bloomberg Law. Tierney is a general internist and a specialist in biomedical informatics and health systems research.

Every drug has an adverse event profile with risks of side effects, he said. Patients need to balance the risks of drug side effects and the time involved with potential additional doctor visits with trying other lifestyle interventions, which--in the case of patients suffering from excessive nighttime urination, may be as simple as raising the patient’s bed to avoid liquid pooling in the patient’s legs. And a pattern of nighttime urination could also be a symptom of an underlying disease like heart disease or sleep apnea, he said.

“If you medicalize a symptom, you risk ignoring the disease that is causing the symptom,” he said. “Not treating the underlying disease could be fatal.”

But the purpose of these “help-seeking” communications is to get people to the doctor for a medical consultation in the first place, said Coleen Klasmeier, who heads Sidley Austin LLP’s food, drug, and medical device regulatory practice and represents drug companies.

“Too many people are not getting treatment at all,” she said.

To contact the reporter on this story: in Washington at delfin@bloomberglaw.com

To contact the editors responsible for this story: at fjohnson@bloomberglaw.com