Licensing intellectual property (IP) in the life sciences industry is often an important factor in the successful commercialization of early-stage therapeutics. Nearly 75% of all new biologics and small molecule drugs recently launched in the U.S. were not discovered by the company or entity that commercialized them, according to the QuintilesIMS Institute, now known as the IQVIA Institute for Human Data Science.

In many cases, promising therapies are identified at universities and academic research centers that lack the capital or resources to complete clinical research and advance therapies to commercial stage. These research institutions regularly enter into licensing agreements with biotech or pharmaceutical companies that can complete later stage research and regulatory requirements and potentially manufacture, distribute, and market new therapies. In other cases, life sciences companies themselves might out-license IP platforms or early-stage therapies that are not a high priority or that they may be unable to commercialize themselves.

While many early-stage therapies may have significant commercial potential, these opportunities are often subject to considerable risk. For example, it can be difficult or impossible to determine the final indication or formulation for a therapy in early development stages. Additional risks related to the development of early-stage therapeutics may include uncertainties around commercialization strategy, IP rights, and the competitive landscape. In considering early- stage licensing opportunities, the expectations of both parties (licensor and licensee) might be aligned at the onset of an agreement, but expectations and incentives can diverge as the development program advances and more data become available. It takes nearly 13 years on average from an initial patent filing until a new molecule becomes an approved drug in the U.S., according to IQVIA, and only a small percentage of development-stage drugs reach the finish line. There are many unanticipated events that can occur during a development program; these uncertainties can make structuring licensing deals especially challenging.

To identify strategies that can help mitigate the risk of unknown factors in drug development and commercialization, our team at CRA conducted an analysis of more than 50 university license agreements involving discovery or pre-clinical stage technology platforms that were completed in the last 10 years. The review shows that universities, which are prolific licensors of early-stage life science technologies, use a broad range of approaches to address potential risks when structuring licensing deals to protect their long-term interests. Findings also show that many licensees are working to include provisions in license agreements to protect their interests, such as royalty “stacking” and combination product provisions. As university licensing activity increases and the number of new startups based on academic inventions continues to grow, there is broader awareness of the need for flexibility to protect all parties without inhibiting efforts to bring new therapies to the patients who need them. On average, a single university licensing officer executed 6.9 licenses and options, an increase of 6.3 percent from 2015 and an increase of 16.3 percent from 2011. In 2016, 70% of university licenses were issued to small companies and startups. (AUTM U.S. Licensing Activity Survey: FY2016.)

One tactic licensees often adopt to maximize their share of the value in future products is the use of combination product provisions. These provisions can help mitigate licensee concerns when a product is made of a component covered under the licensed IP and additional components that are not covered. For example, with a prefilled drug delivery system such as a metered dose inhaler, the drug might be covered under licensed patents while the delivery system is not. Negotiating a licensing deal that is acceptable to both parties can be challenging when a future product’s value may ultimately be driven largely or even partially by non-patented components. Combination product provisions are designed to address this challenge by apportioning the value of the patented component from the value of non-patented components, thereby reducing the total product sales revenue that will be subject to royalty payments.

Royalty stacking provisions are also often used when a licensed product may be covered by additional IP rights held by parties other than the licensor. These provisions typically provide a mechanism for lowering the royalty rate based on royalties owed to third parties. 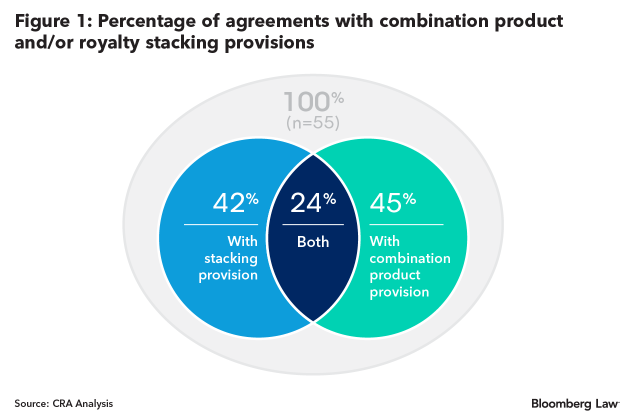 Of the 55 licensing agreements reviewed in the CRA analysis, 35 (64%) contained at least one of these two provisions, whereas only 13 (24%) included both. Although combination product and royalty stacking provisions are more commonly used to protect the interests of licensees, universities also often work to include language designed to protect their interests as well. Of the 25 deals containing combination product provisions, four included a royalty floor under which the licensor’s royalties could not be reduced. Conversely, all 23 agreements that had royalty stacking provisions included a royalty floor. Licensors generally try to avoid agreements that include both of these provisions, given the possibility that they might be applied simultaneously to the same product sales which could substantially lower the effective royalty rate. A royalty floor can address this possibility by clearly defining the royalty range that may be applied under a license agreement.

Sublicensing payment structures may be an important consideration for licensors when developing deals related to early-stage technology. Given the fact that most university licenses are granted to small pharmaceutical companies and start-ups, according to the AUTM survey, it is likely that sales of the final commercial product will be made by a sublicensee rather than the original licensee. In addition, given the long development time required for most drugs, non-royalty sublicensing payments are often an important source of revenue for licensees. Our analysis showed that nearly all deals (91%) provided licensors with consideration related to any subsequent sublicensing payments received by the licensee, including royalties, upfront fees, and milestone payments. In 5% of deals reviewed, the university had rights only to royalty payments from sublicensees. (The remaining 4% comprised two deals that could not be evaluated because sublicensee provisions were redacted.) 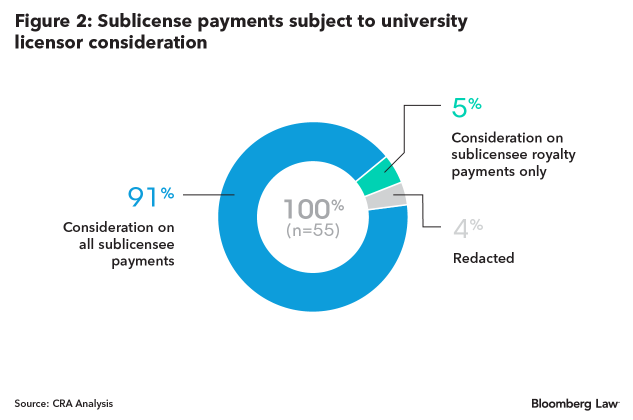 There were 41 non-redacted agreements in which a university licensor received a share of non-royalty sublicense payments. In 44% (18) of these deals, the university received a fixed percentage of the upfront and milestone payments; in 56% (23) the licensor received a tiered percentage of those payments, depending on timing, revenue, or development stage of the product. Licensors sometimes further protected their rights by either not permitting sublicensing of the IP or requiring prior approval of any sublicense, as seen in approximately one third of all of the reviewed agreements. This approval structure can help ensure the continued effective development of a technology and a university’s interest in that development.

These different licensing structures reflect the need for licensors and licensees to consider the range of paths that early-stage biotechnology development can take and then take all available and mutually agreeable steps to protect their interests. It is important that both parties conduct a thorough assessment of risk and have a comprehensive understanding of industry norms and the potential benefits and risks of each option in structuring a deal. Our findings show that licensees are most likely to focus on efforts to protect their value positions to limit royalty payouts while licensors look to safeguard future rights with language ensuring a share in the value generated through sublicensing activity. As the discovery of promising new therapies continues to expand, the emphasis on collaboration and innovative structuring in licensing arrangements is only expected to grow. It will be increasingly essential for participants in any early-stage licensing deal to understand and address these issues in order to protect their interests in the long term.

Dr. Sean Sheridan is a principal in the Intellectual Property Practice at CRA in Chicago. Zlatina Dobreva is an associate in the Life Sciences Practice at Charles River Associates in London.

The views expressed herein are the authors’ and not those of Charles River Associates (CRA) or any of the organizations with which the authors are affiliated.

To contact the editor responsible for this story: at rkubetin@bloomberglaw.com