Volumes of patent decisions from the Official Gazette of the U.S. Patent and Trademark Office.
Andrew Harrer/Bloomberg via Getty Images

Patent applicants rejected by the Patent Trial and Appeal Board usually appeal directly to the U.S. Court of Appeals for the Federal Circuit. However, Sterne Kessler attorneys say there might be a better way for biopharma applicants to get the board’s decision overturned: section 145 actions.

The standard course of action when a finally rejected patent applicant loses an intra-agency appeal to the U.S. Patent & Trademark Office’s Patent Trial & Appeal Board (PTAB) is a further appeal directly to the U.S. Court of Appeals for the Federal Circuit.

But, for those seeking high-value patents in the biopharma space, there may be a better route to overturning the PTAB’s decision. A seldom utilized statute, 35 U.S.C. § 145, permits an applicant to challenge the PTAB’s decision by filing a civil action in district court.

This article explores the strategic advantages associated with section 145 actions in terms of maximizing patent term and leveraging the unique evidentiary opportunities available when litigating in district court.

Without the promise of significant patent term, the incentives to invest the enormous cost of obtaining marketing approval (over $2 billion) and to combat the gauntlet of competition following approval would be significantly reduced. See Kinch, M.S. and Moore, R., “Innovator Organizations in New Drug Development: Assessing the Sustainability of the Biopharmaceutical Industry,” Cell Chemical Biology 23:644-53 (2016).

Obtaining patents is the first hurdle on the road to protecting biopharma’s investment in drug development. However, obtaining patents is challenging as it requires convincing a patent examiner to allow meaningful claims that cover the ultimately approved product. If unsuccessful at the examiner level, a patent applicant can appeal finally rejected claims to the PTAB.

For a patent applicant unsuccessful before the PTAB, section 145 provides that the district court “may adjudge that such applicant is entitled to receive a patent for his invention . . . as the facts in the case may appear and such adjudication shall authorize the [PTO] Director to issue such patent on compliance with the requirements of law.”

Thus, section 145 affords a dissatisfied patent applicant the opportunity to sue the PTO and ask a federal judge to independently adjudicate patentability.

Certain advantages associated with section 145 actions are discussed below.

Section 145 actions proceed in the same manner as any other civil action. A patent applicant files a complaint after the PTAB issues its final decision, which can either be a panel decision or a panel’s decision following a request for rehearing. See 37 C.F.R. §§ 41.54, 41.52, 90.3.

The district court first sets a scheduling conference and a date for trial. Deadlines are also set for fact and expert discovery. Following discovery, there may be dispositive motions, such as a motion for summary judgment. Assuming the case is not resolved on summary judgment, a trial may ensue.

Generally, the schedule can proceed as illustrated below in Figure 1. (Case schedule may fluctuate somewhat as each judge in the Eastern District of Virginia may conduct scheduling differently.) 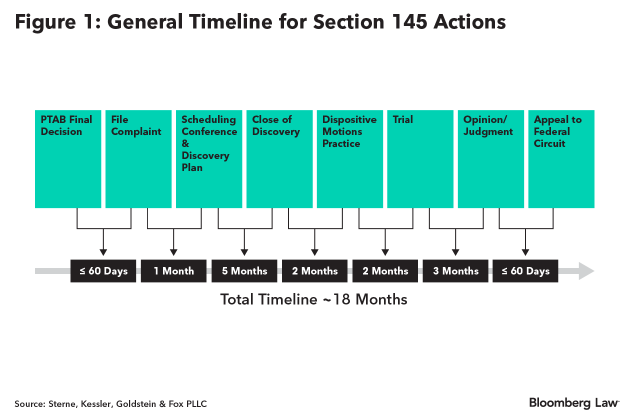 A review of section 145 actions filed over the last five years reveals that discovery and dispositive motions are completed within the first 6-8 months of litigation.

In section 145 actions, counsel for the government has been predominantly from the Department of Justice, but attorneys from the PTO also play a role. And, while fully capable of litigating civil actions, the government does not have unlimited resources for doing so.

The opportunity for patent applicants to settle with the government which patent claims should issue and which should not is a unique feature associated with section 145 actions.

When a patent applicant achieves reversal, either via the court’s order or settlement, the issuing patent is also entitled to compensatory patent term adjustment for time spent on appeal.

A significant advantage of section 145 actions is the opportunity to obtain day-for-day patent term adjustment due to time spent on appeal. A patent applicant successful on appeal is guaranteed an adjustment of one day for each day of the pendency of the appellate review by the PTAB or by a Federal court. 35 U.S.C. § 154(b)(1)(C) (guaranteeing adjustment where a Federal court issues “a decision in the review reversing an adverse determination of patentability”).

Thus, a plaintiff-patent applicant can obtain patent term adjustment for pendency at the PTAB, in district court, and on appeal at the Federal Circuit, so long as the decision reverses the PTO’s determination of unpatentability.

As shown in Figure 2 below, applying the patent term adjustment framework of section 154(b)(1)(C) to the likely timeline of a section 145 action, provides several opportunities to obtain positive term adjustment. 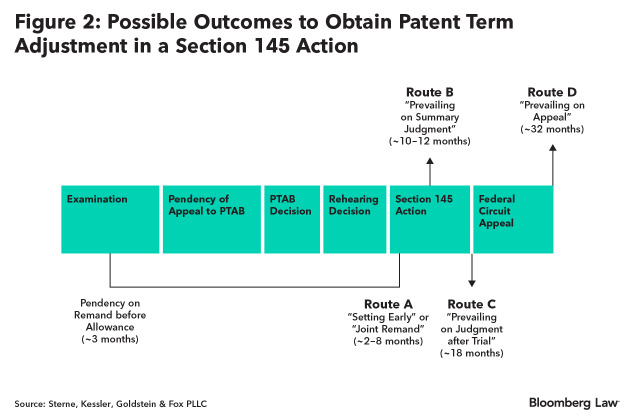 The first opportunity to obtain adjustment arises via an early settlement or joint remand under Route A in Figure 2. Under this scenario, the patent applicant could obtain anywhere from 2-8 months of adjustment from the section 145 action, as well as approximately 3 months due to application pendency delay on remand before allowance.

The second opportunity to obtain adjustment arises from a favorable ruling on summary judgment, illustrated by Route B in Figure 2. Such a decision could be issued about 10-12 months from the issuance of the PTAB’s final decision and would similarly obtain the approximately 3 months of application pendency delay on remand before issuance.

The third opportunity to obtain adjustment arises by virtue of prevailing on judgment after trial, illustrated by Route C in Figure 2. Based on the time to final disposition in the Eastern District of Virginia, the court’s decision could be issued within 18 months from the start of the litigation. As with Route A and B, Route C would also include the approximately 3 months of application pendency delay on remand before issuance.

The fourth and final opportunity to obtain adjustment could arise by appeal of the district court’s decision either affirming the PTO, in which case the patent applicant would appeal, or reversing the PTO, in which case the government would appeal. This outcome is illustrated by Route D in Figure 2 and could add an additional 14 or so months after the district court’s final decision. Route D would similarly obtain the approximately 3 months of application pendency delay on remand before issuance.

As shown below, these various outcomes from a section 145 action could add several months to years to a patent’s term. 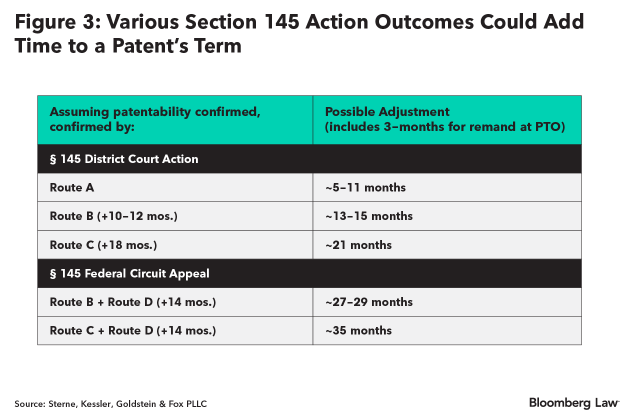 While any overlapping delay attributed to the PTO, such as greater than 3-year application pendency (35 U.S.C. § 154(b)(1)(B)), or to patent applicant’s failure to engage in reasonable efforts to conclude prosecution (35 U.S.C. § 154(b)(2)(C)), is subtracted from the successful section 145 action patent term adjustment, a patent applicant can proactively manage and minimize at least its own delays.

In addition to the potential gain of several months or years of term on the end of a patent, section 145 actions provide a patent applicant with several additional strategic opportunities to obtain a patent.

Strategic Opportunities to Build Applicant’s Case for Success on Appeal

In addition to the ability to introduce new evidence in support of patentability, parties in section 145 actions can leverage the full scope of fact and expert discovery ordinarily available under the Federal Rules of Civil Procedure. Kappos, 566 U.S. at 431.

And although the sample size of section 145 actions from the last five years is relatively small, those actions show that the district court can be persuaded by new expert testimony and experimental evidence. Panchev v. Kappos, No. 1:12-cv-641, 2013 WL 3270651 (E.D. Va. June 25, 2013) (considering de novo newly admitted, post-filing evidence including scientific abstracts and experimental data).

In certain situations, the claim construction process may provide plaintiff-patent applicants with patentability arguments that the PTO would not otherwise be forced to address in an ex parte context. See Panchev, 2013 WL 3270651, at *12-15 (construing claims as “a question of law to be determined by the Court” under Markman but applying the broadest reasonable interpretation).

Finally, the adversarial nature of section 145 actions can itself be a benefit. For example, a final resolution supporting patentability from a district court can enhance the strength of the presumption of validity because there has been an opposing party cross-examining and challenging the patent applicant’s evidence.

In the recent case of Hyatt v. Iancu, after an extensive trial on the merits, the district court concluded that his patentable claims have sufficient written description support, are not anticipated, and are nonobvious. See Hyatt v. Iancu, No. 1:09-cv-01872, ECF No. 225 (D.D.C. Aug. 1, 2018).

Having already been subject to an inter partes contest, future opponents cannot reasonably argue that the patent was issued without sufficient scrutiny of its patentability.

Given the tremendous investment necessary in biopharmaceutical drug development, biopharma patent applicants must carefully weigh strategies and options for enhancing exclusivity in the form of patent term. In the toolbox of strategies, biopharma companies should consider the value added by forcing the PTO into litigation via a section 145 action, where tools such as discovery, experts, and claim construction become available or more robust.

While the risk-reward calculus for section 145 actions is similar to other types of civil litigation, the unique strategic opportunities and promise of patent term adjustment rewarded by a successful outcome, warrant consideration in any biopharma company’s arsenal of patent portfolio building strategies.

Pauline Pelletier is a director in Sterne Kessler’s Trial & Appellate Practice Group. She is experienced in patent litigation before the federal courts and the International Trade Commission, post-grant trial and reexamination practice before the U.S. Patent and Trademark Office, and appeals before the U.S. Court of Appeals for the Federal Circuit.