Health-care workers treat a patient on the Covid-19 ICU floor of the University of Massachusetts Memorial Hospital in Worcester, Mass., on Dec. 27, 2021.
Allison Dinner/Bloomberg via Getty Images

Lawmakers are considering how to package and pass overlapping proposals on biomedical innovation and pandemic preparedness before a top senator’s retirement at the end of the year.

The good news is all the proposals have bipartisan support. The bad news is Congress is already overloaded with other agenda items, such as Democrats’ social spending measure, narrowing the time available for complex committee negotiations and floor votes. Advocates close to the talks say one solution could be stitching all the proposals together. Parts of the agenda could also hitch a ride on must-pass legislation for Food and Drug Administration user fees.

Sens. (D-Wash.) and (R-N.C.)'s release last week of draft pandemic preparedness legislation marks the latest and most significant effort to beef up medical research and public health in the wake of the Covid-19 pandemic. Burr is retiring at the end of this year.

The senators, who are the chair and ranking member of the Senate Health, Education, Labor and Pensions Committee, said they’re considering additional provisions to their draft bill, the PREVENT Pandemics Act.

Their effort dovetails with a similar House effort to speed development of life-saving medicines known as Cures 2.0 ().

Also in the mix is authorization of the Advanced Research Projects Agency for Health (ARPA-H), President Joe Biden’s proposal to set up a dedicated research agency that aims to speed up biomedical discoveries.

“There seems to be some core components, at least between current PREVENT Pandemics and Cures, that I think could really move,” said Alyssa Llamas, a director at the consulting firm Wynne Health Group. She said the three pieces could be in a single package to speed medical developments and prepare for novel outbreaks like Covid-19. 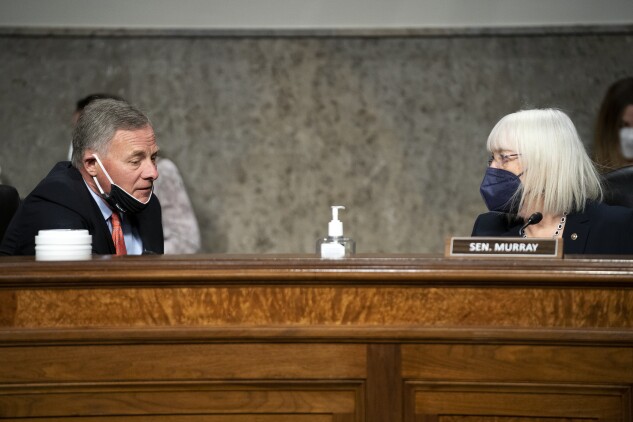 The intersecting components could be:

Also gumming up the agenda is lawmakers’ responsibility to reauthorize drug and device user fee programs within the Food and Drug Administration before they expire at the end of September. The user fees, which help fund FDA operations, must be revisited every five years, and the final product usually includes a number of other FDA policy changes. The House Energy and Commerce Committee announced the first hearing on user fee reauthorization for Feb. 3.

Some parts of the broader biomedical and pandemic preparedness agenda could ride in the user-fee measure, which is considered must-pass, Llamas said. They include modernization of clinical trials through the use of digital health and additional support for review of medical products.

Burr and Murray said they’re considering other additions, like improving laboratory security and establishing clear leadership and accountability for responding to future outbreaks.

A Republican aide familiar with the discussions said the pair haven’t nailed down a timeline for passage of the Murray-Burr bill. For now, Senate Democratic leaders are trying to pass their signature domestic spending package and a voting rights bill, and are preparing to confirm a new Supreme Court justice, the aide noted.

The ARPA-H legislation isn’t currently part of the pandemic prevention proposal, in part because lawmakers in the House disagree over whether the research agency should sit within the National Institutes of Health or have its own separate unit in the Department of Health and Human Services.

Cures 2.0 would put the research agency within the NIH, as Biden wanted. A separate proposal by Rep. (D-Calif.), who chairs an influential health subcommittee, would put make it an independent entity within the HHS, outside of the NIH.

The last time Congress tackled major biomedical legislation, six years ago, the 21st Century Cures () law passed with great fanfare and large bipartisan support. Cures 2.0, which was introduced in November, isn’t infused with the same momentum because its architects lack the muscle they had in 2016. At the time, Rep. (R-Mich.) chaired the crucial House Energy and Commerce Committee.

Cures cosponsor Rep. (D-Colo.) remains a senior member of the Energy and Commerce Committee and leads its oversight panel, while Upton is the ranking member of the energy subcommittee. But now, Upton and DeGette need to rely on Eshoo. Eshoo has said she’ll hold a hearing on ARPA-H and has expressed support for Cures 2.0 but has her own competing legislation.

An aide for Upton on Monday said his office has been in talks with Burr’s office about the different legislative proposals. Murray was the top Democrat to move 21st Century Cures forward in the Senate.

Ellen V. Sigal, chairperson and founder of Friends of Cancer Research, which pushes for policies that support scientific breakthroughs, predicts ARPA-H will pass in some capacity because it has strong bipartisan support in Congress and from patient groups, industry, and the NIH.

“The caveats are it has to be independent and it has to have the the authorities it needs to really function as intended,” she said.