Health-care and life sciences deal volume started the year at a sizzling pace in January with the most transactions per month—258—in more than a year.

“With more than 10% of the U.S. population now having received at least one dose of a Covid-19 vaccine and supply continuing to ramp up, along with another large Covid-19 economic rescue plan expected in early March, investment activity is expected to remain strong as the country accelerates its recovery from the pandemic,” Larry Kocot of KPMG in Washington said.

The Biden administration has begun moving aggressively forward on legislation to provide more stimulus and financial support for pandemic recovery “while actively promoting spending on the expansion of health-care coverage,” Kocot said.

The $1.9 trillion in new spending called for by President (D) “will inevitably have an impact on health-care markets and the overall financial stability of the industry, thereby affecting investors’ outlook on the size, scope, and number of transactions that they pursue,” Kocot said.

The strong activity in physician practices and services deals “is driven by investors seeking to take advantage of the anticipated rebound in patient volumes as practices prepare to ramp-up operations in 2021 after the slowdown in activity from Covid-19,” Hector Torres of FocalPoint Partners in Chicago said. 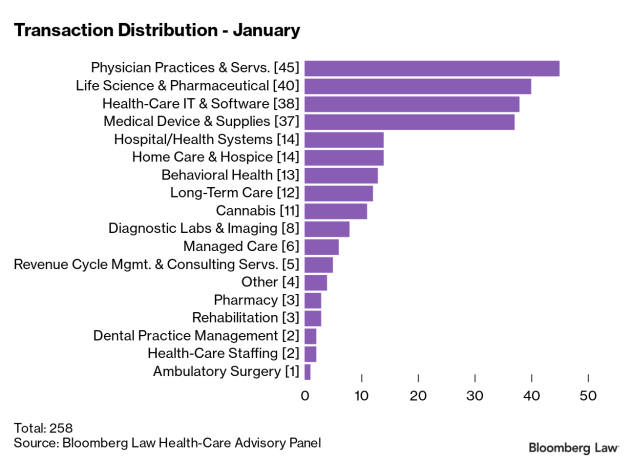 KPMG in Washington and FocalPoint Partners of Chicago prepared the curated list of select January transactions for Bloomberg Law.

The volume of hospital consolidations is picking up with 14 deals involving more than 30 facilities, , a member of Epstein Becker & Green PC’s health-care and life sciences practice in Newark, N.J., said. That includes Essentia Health’s acquisition of 13 critical access hospitals from CommonSpirit Health, and Aspirus’s acquisition of seven hospitals from Ascension. “We expect to see many more hospital consolidations on a consistent basis throughout the rest of this year,” he said.

The acquisition of Northwest Community Healthcare by NorthShore University HealthSystem is noteworthy, said Aaron Newman of FocalPoint Partners. The deal represents a shift in NorthShore’s growth strategy as well as the growth strategies of other large health systems following the cancellation of a planned merger with Advocate Health Care in 2017 after the Federal Trade Commission blocked the deal on antitrust grounds, he said.

The 37 medical device and services deals continue a trend from 2020 in which the sector “played a vital role in responding to the pandemic, including ramping up supplies needed to deliver and administer vaccines,” Ross White of KPMG in Washington said.

Health-care information technology and software had 38 deals in January, “continuing the heavy activity that was seen in 2020 Q4, as the sector provides the health-care workforce with services to innovate in non-traditional settings,” Anjana Patel of Epstein Becker & Green in Newark said.

One notable deal is Optum’s announced acquisition of Change Healthcare for $13.8 billion, Patel said. Change provides data analytics to improve clinical decision-making as well as billing and collection processes, Patel said. The acquisition “will add to Optum’s robust portfolio and strengthen their position as a top health-care analytics company,” she said.

Home care deals demonstrate the expanding demand for the services as more elderly people age in place and avoid institutional care settings due to the impact of Covid-19, Patel said. In January, the sector was dominated by LHC Group, Traditions Health, and Caring People, which accounted for nine of the 14 transactions.

The 13 behavioral health deals reflect “the growing need for mental health services throughout the country, which has been elevated even further by the pandemic,” Zachary Taylor of Epstein Becker & Green in Newark said. Substance abuse treatment providers continue to drive growth in the sector, accounting for more than half of the deal volume in January, he said.