Medications sit on a shelf in a pharmacy at Perry Memorial Hospital in Princeton, Ill., on Oct. 11, 2017.
Photographer: Daniel Acker/Bloomberg

Patients with cancer, kidney disease, and other ailments could pay higher drug prices for months longer than they otherwise would thanks to court delays caused by the coronavirus outbreak.

At least six patent infringement lawsuits over brand-name drugs are at risk of surpassing—or are already set to exceed—Food and Drug Administration timelines for approving generic versions, according to a Bloomberg Law analysis of court dockets. Depending on how long the pandemic goes on, that list could grow.

“Given the extraordinary circumstances we are in, it’s very likely there will be disruptions that will create a risk of delayed entry” of generic versions, said Saurabh Vishnubhakat, a professor at the Texas A&M University School of Law.

The Hatch-Waxman Act puts a 30-month freeze on the FDA’s ability to approve generic drugs in patent disputes. It’s intended to give courts an opportunity to resolve cases before generic drugs hit the market. On average, cases go to trial in 27 months, according to a 2016 study co-authored by Sheila Swaroop, a partner with Knobbe Martens in California, that looked at 2,200 lawsuits over a six year period. That leaves little wiggle room for unexpected delays.

The goal has “consistently” been to resolve the litigation within the time frame of those FDA stays, “but right now the courts and the litigants are in a unique situation,” Swaroop said.

At stake is millions or even billions in revenues for brand name drugmakers and their generic competitors. Cases awaiting resolution include treatments for life-threatening illnesses like diabetes and cancer that can cost patients anywhere from $400 to $16,500 a month. With FDA data showing the first generic version of a drug wholesaling at nearly a third less than brand name drugs on average, the hit to patients’ wallets can be significant.

The automatic 30-month stay is part of Hatch-Waxman’s attempt to achieve a balance between encouraging innovation among brand-name drugmakers and consumers’ need for affordable generic versions.

Generic companies often announce plans to develop lower-cost versions of brand-name drugs in the years leading up to a patent’s expiration date, with the goal of launching their own version before or as the brand monopoly ends.

But the pandemic has wreaked havoc on court calendars, making it harder to coordinate appearances and disrupting the discovery process.

Generic companies may not win each of the cases identified in the Bloomberg Law analysis, but for those with valid defenses, court delays could mean patients will wait longer to have access to lower-cost versions of life-sustaining medication.

For example, Velphoro treats chronic kidney disease and costs $1,381 out-of-pocket for a roughly 30-day supply. Others, like the antipsychotic Invega Sustenna, priced at $498 for less than a month’s supply, have profound quality of life impacts for patients.

All of this is happening as 30 million Americans have filed for unemployment in the past six weeks, meaning more people are losing their health insurance, driving up their out-of-pocket medical costs.

“Generic entry has a huge impact on the market for any particular drug,” said Andres Sawicki, a professor at the University of Miami School of Law who specializes in intellectual property. “For some of these drugs, we’re talking about hundreds of millions or billions of dollars a year, so even a six-month delay in entering the market—that’s hundreds of millions of dollars that consumers are paying.”

“The patent owner wants relief to enforce its patent rights, but the fact is that the district court isn’t able to provide it in a timely fashion because of the Covid pandemic,” Wexler said.

That raises concerns for the brand-name company that the generic makers may bring their own patent-infringing version to market when it receives FDA approval at the end of the stay, even if the court hasn’t yet ruled in the case—a practice known as launching at risk, Wexler said. Brands seeking to prevent that may pursue injunctions, which can create more of a burden on the court system, he said. 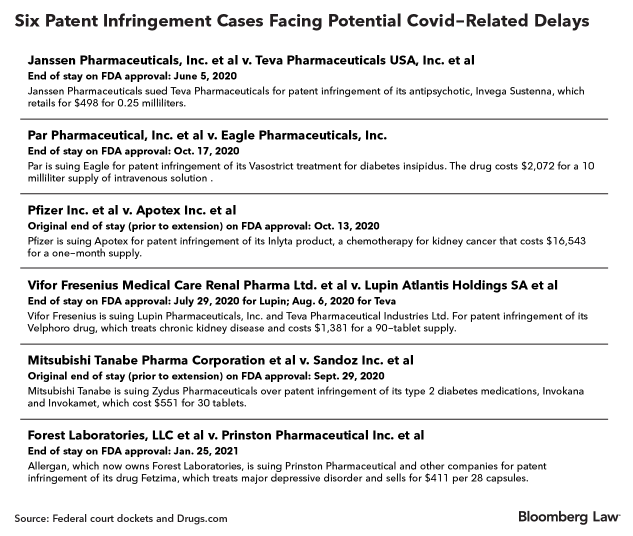 In one case that has already seen a delay, Zydus Pharmaceuticals is seeking to manufacture generic versions of Mitsubishi Tanabe Corp.'s Invokana and Invokamet. Both are treatments for type 2 diabetes that cost $551 a month out-of-pocket.

The drugs generated $735 million in 2019 for Mitsubishi Tanabe, and the company alleges that Zydus’ generic product would infringe two patents.

The original trial date was May 4, well ahead of the Sept. 29 date when the stay was set to lift. Realizing a May 4 trial was unrealistic, the parties negotiated to extend the regulatory stay 120 days from the conclusion of the trial, leaving the timeline for a cheaper generic at the mercy of the court schedule.

Similarly, Pfizer is suing Apotex over its attempt to market a generic version of Inlyta. The chemotherapy treatment for kidney cancer costs $16,543 out-of-pocket per month and brought in $477 million in revenues for Pfizer in 2019.

The bench trial, originally scheduled for May 11, has been pushed back to a date yet to be determined. Additionally, the Delaware District Court judge agreed to extend the 30 month stay, though the new timeline hasn’t been made public.

Delaware, the busiest district for patent cases, temporarily closed its Wilmington courthouse in March after an attorney who made an appearance there tested positive for Covid-19.

Since then, Delaware judges have sought to avoid having parties travel from out of town and are encouraged to hold proceedings via telephone or video conferencing “where practicable,” according to an April 17 court order.

The District of New Jersey has taken similar measures, ordering a 30-day extension on all filing and discovery deadlines in civil cases from May 1 through May 31. The order allows civil litigants to seek relief for emergency situations, though it’s unclear if delayed generic entry would qualify.

Even beyond court restrictions, Covid-19 has limited travel and social contact, making it harder for attorneys to accomplish ordinary tasks like collecting documents and deposing witnesses, which can lead to requests for filing extensions.

One option is for judges to ask both parties to informally agree to wait for a specific period of time or until the resolution of the case before an FDA-approved generic can move forward with a launch. Generic companies often agree to these extensions rather than risking an injunction. In addition, generic drugmakers often don’t want to burden judges who need more time to resolve a case.

Launching a generic drug at risk of losing in court later sometimes happens under normal circumstances—typically when the generic company is confident based on earlier proceedings that it will win, or if the drug patent is particularly weak, said Michael Carrier, a professor at Rutgers Law School. However, it’s dangerous because generic companies that later lose must reimburse the brand-name company for lost revenues and other damages, he said.

“A fair number of generics would not be willing to take that risk,” Carrier said.

Judges can also issue an injunction that would preclude a generic launch for a certain period if they need more time to decide a patent case.

While judges have options to manage the delays, in the meantime consumers could still be paying higher prices for months to come.

“It’s not just that the situation is so severe that there’s delays and disruptions,” Vishnubhakat said. “The problem is that the immediate future and foreseeable future is so uncertain.”

“The inability to know how long this is going to last makes triaging cases incredibly difficult and that’s what makes this so unprecedented,” he added.