Lawmakers are still at odds over how to design drug pricing reform after the White House omitted key provisions from its framework for a sweeping domestic spending package.
Photographer: Stefan Zaklin/Getty Images

Democratic lawmakers are scrambling to reach a deal to get a long-debated drug pricing overhaul into the package after it was dropped in a White House framework. But analysts say that instead of trying to reach consensus within Congress, a more surefire path to lower prices would be to develop new Medicare models that tie reduced drug payments to improved patient outcomes.

The CMMI is testing several drug-related payment models, including one that would limit out-of-pocket spending on insulin in Medicare Part D plans. With legislative negotiations still in flux, President Joe Biden could lean even more on the innovation center to lower pharmaceutical prices.

The center was established in 2010 through the Affordable Care Act to design and test innovative health-care payment and service delivery models. Addressing drug affordability and reducing barriers to high-value care are among the CMMI’s goals for the next 10 years.

A CMS spokesperson said the agency is committed to lowering prescription drug prices, a goal supported by Biden’s executive order on competition and the administration’s drug pricing plan. 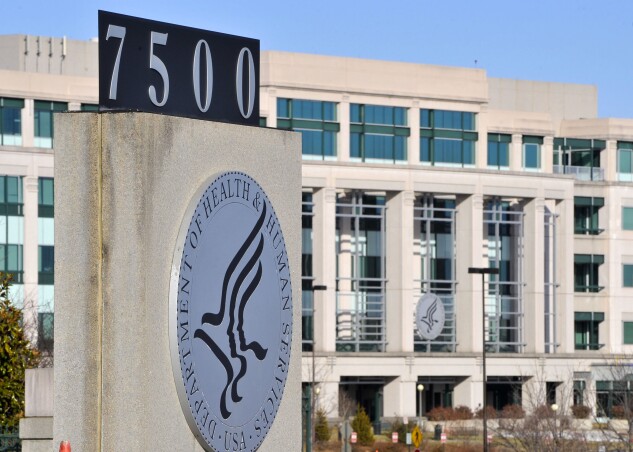 The Centers for Medicare and Medicaid Services office, part of the U.S. Department of Health and Human Services, in Woodlawn, Md.
Photo: Jay Mallin/Bloomberg via Getty Images

The White House released a framework last week outlining the latest version of Biden’s economic agenda. It omits a major drug pricing change Democrats have debated for months—allowing the government to negotiate directly with pharmaceutical companies for reduced costs or caps on price increases.

The White House told reporters Oct. 28 that it decided to drop drug pricing from its framework due to obstacles in achieving consensus among Democrats. House Democrats later that day unveiled draft legislation () to enact the plan that also excludes the drug pricing component.

The move marked a temporary win for drugmakers, which along with health insurers and pharmacy benefit managers hold significant sway over negotiations on drug prices.

It’s “a gift to the pharmaceutical industry,” said Stacie Dusetzina, a health policy professor at Vanderbilt University. “It is a signal that they can feel free to price as high as the market will bear, with no real concern for reform.”

But analysts say all hope is not lost for implementing drug pricing changes—a key component of Biden’s agenda.

“Patients and consumers are strongly behind this idea of trying to address high drug prices, so I think that this conversation will continue,” Harvard Medical School professor Aaron Kesselheim said.

Democrats on Monday remained at odds over how to design legislation to empower the government to negotiate with drugmakers. Unresolved issues include the kinds of medicines that would be covered, and whether negotiation would apply to drugs under both Medicare Part D, the prescription drug benefit, and Part B, which covers health-care providers’ services and outpatient care.

Democratic leaders signaled over the weekend they want to vote on their nearly $2 trillion tax and social spending bill this week, giving them just days to cut a drug pricing deal.

Pharmaceutical Research and Manufacturers of America spokesperson Brian Newell said the trade association stands “ready to work with policymakers this year to enact meaningful reforms that will lower out-of-pocket drug costs for patients.”

Analysts say that without Congress, the Medicare innovation center could play an even more critical role in bringing drug savings to patients and consumers.

“We saw the last administration try to do reform through CMMI, and I think we could see some more of that from this administration moving forward,” Wright said.

He added that if congressional gridlock continues, “we’ll likely see CMMI test out some new payment models,” including a redesign of Medicare Part D to help provide cost-sharing support for biosimilars and generics.

Such a redesign could include a cap on out-of-pocket costs for seniors, Dusetzina said. She noted that all insured groups outside of Medicare beneficiaries have a spending limit.

“Today, people who need very expensive drugs or many drugs likely find them to be unaffordable,” she said. “It is unacceptable to not improve the Part D benefit.”

The Department of Health and Human Services in September highlighted testing new payment models as part of a series of wide-ranging recommendations on curbing rising drug costs. The report suggested CMMI could use mandatory models that link payment for prescription drugs “to factors such as improved patient outcomes, reductions in health disparities, patient affordability, and lower overall costs.”

One such model could include using value-based payments for Medicare Part B. Under that type of model, “payment for drugs is directly linked to the clinical value they provide patients,” according to the HHS report.

Models considered by CMMI move through a two-phase process. Under the first phase, the agency works with industry providers to test the model and determine if it effectively helps a specific population experiencing deficiencies in care or potentially avoidable high drug costs. The second phase consists of expanding the timeline and scope of the model, including by extending it nationwide.

The HHS secretary can certify a model to become a permanent part of Medicare if the model successfully moves through both phases. Since CMMI’s founding, the secretary has certified four models, including the Medicare Diabetes Prevention Program, which allows early clinical intervention to help prevent type 2 diabetes in patients who show signs of pre-diabetes.

Analysts say options for lowering drug prices don’t stop at Congress or CMMI, but can also extend to other actions across the Biden administration.

Kesselheim, who studies prescription drugs and medical device regulation, suggested that the Biden administration establish a non-governmental expert panel to “provide rapid turnaround evidence based reports on the clinical value of new drugs.” That information could then be considered in drug pricing talks among Part D and private payers.

He also said the administration could encourage the Food and Drug Administration to more quickly approve cheaper generics and biosimilars and discourage drug companies from engaging in tactics that some lawmakers see as anticompetitive, such as seeking patents for the allegedly sole purpose of gaining a monopoly for a particular drug or treatment.

HHS said in its comprehensive plan that the FDA could work to clarify “the approval framework for generic drugs to encourage a more transparent and efficient process.”

Despite the lack of consensus on drug pricing changes, the White House framework and House proposal included a provision to repeal a Trump-era regulation that would have limited drug rebates.

Kesselheim said drug pricing is likely to remain a hot-button issue, regardless of whether Congress acts.

“I don’t think that this is the final chapter in this conversation,” he said.

To contact the editors responsible for this story: at akramer@bloomberglaw.com; at sbabbage@bgov.com