A close-up of a syringe containing a Covid-19 vaccine as it is given to a Cardiff and Vale Therapy Centre patient on Dec. 8, 2020, in Cardiff, Wales.
Photographer: Matthew Horwood/Getty Images

The Biden administration is taking the final steps toward dropping a Trump-era policy hindering people injured by vaccines from seeking federal compensation.

The decision has implications either way for the effort to immunize all Americans against Covid-19, but the Department of Health and Human Services said Friday that any changes to the vaccine injury program “could have a negative impact on vaccine administrators” and be at odds with the administration’s massive push to get all U.S. adults vaccinated this summer.

Biden initially paused the rule until April 23. Late last week, however, the administration proposed axing it, citing the coronavirus pandemic and the Trump administration’s hasty finalization of a change that traditionally would take several years.

Covid-19 vaccines aren’t now among those in which associated injuries are eligible for compensation under the program, but they could be added in the future. The Trump rule, which would complicate the addition of new vaccines to the injury list, was finalized shortly after the first Covid-19 shots became available. Disallowing potential claims of injury could dissuade some people from getting vaccinated, injury lawyers argue.

But expanding the eligibility list in the past has led to more claims on a system that’s already strained. It covers twice as many vaccines as it did in the 1980s and has just eight judges.

“Vaccines are an incredibly important part of our public health,” said Renee Gentry, director of the Vaccine Injury Litigation Clinic at George Washington University Law School. “In order for a universal immunization program to be effective, you need to have a vibrant safety net for people who are injured.”

Vaccine injuries are rare—1 out of every 500,000 doses distributed in the U.S. has an injury petition.

The few people who suffer them can petition the HHS for damages via its Vaccine Injury Compensation Program, or VICP.

The VICP, which is funded by taxes on vaccines, provides compensation for injuries from new vaccines recommended by the Centers for Disease Control and Prevention for routine administration to children. But a day before leaving office, President issued the rule that would prolong the process to add new vaccines to the table and cut off fast compensation for shoulder and other frequent types of injuries attributed to vaccinations.

Even if certain injuries aren’t on the vaccine table, people can still petition to be compensated for them. They just have a more arduous process, which is why some injury lawyers argue taking injuries off the list could actually strain the system even more.

Why the Trump administration would push out its rule “during a pandemic is inexplicable,” said Altom Maglio, founder of Maglio Christopher & Toale P.A., said. “There’s no reason why you wouldn’t want the vaccines covered.”

It’s not clear what the Trump administration’s motivation was. Adding to the confusion was that Trump’s HHS said in the final rule that new vaccines could still be added to the table through a statute for family planning services grants that doesn’t mention vaccines once.

New vaccines can also be added to the table through separate notice and rulemaking processes, but that can be lengthy.

In justifying the final rule, the HHS under Trump argued a lot of shoulder injuries were caused by administration methods, not the vaccines themselves.

Shoulder injury related to vaccine administration, or SIRVA, isn’t a sore arm—something many people have complained of temporarily after Covid-19 vaccinations. It’s persistent pain and limited range of motion caused by inflammation of tendons or ligaments, often because the shot is injected too high on the arm.

SIRVA claims are filed mostly by adults and have bogged down the system, Joseph Hunt, a lawyer at Alston & Bird, said in a letter in support of Trump’s policy.

“In the year following the addition of SIRVA to the Table, 156 fewer cases were adjudicated than in the previous year,” Hunt wrote. His letter didn’t address axing the section of the table that streamlines the addition of new vaccines to the program.

, the National Association of Chain Drug Stores, and the Biotechnology Innovation Organization were among the many supporting Biden’s decision to delay the rule, arguing it is at odds with the National Childhood Vaccine Injury Act.

A History of Resistance

“There’s a history of HHS opposing expanding compensation and expanding the vaccine tables,” said Wendy Mariner, a professor from Boston University who studied the vaccine injury compensation program. “They were opposed to the whole program in the first place and were fearful that it would make people think vaccines weren’t safe.”

Federal officials also worried it would cost too much, Mariner said. Compensation awards have spiked after new vaccines were added, most recently in 2017. But the spikes quickly receded, and last fiscal year, payments declined to the lowest level since 2012, according to trust fund data.

So far the government has paid $4.2 billion to vaccine injury petitioners since 1989, according to Health Resources & Services Administration data.

“During the same period, administrative funding has increased by only 23 percent from $7.5 million to $9.2 million,” the agency wrote.

As of March, 4,139 cases are active within the program, according to Gentry. 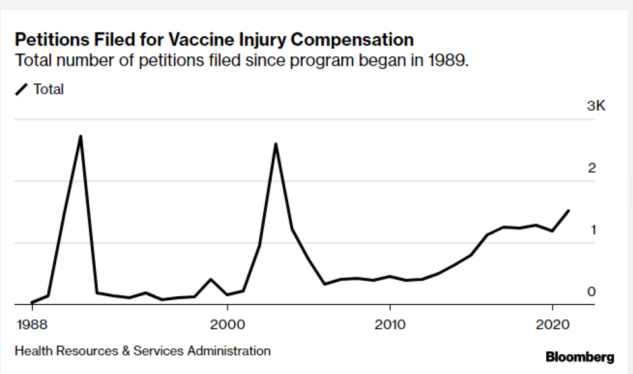 There’s no evidence Covid-19 vaccines are riskier than others. But the introduction of any widespread vaccine invariably means more chances for injury.

“People are going to have reactions. There are going to be injuries,” said Chris Webb, shareholder and attorney at Black McLaren Jones Ryland & Griffee PC. And word would quickly get around if there was no way to get compensation, which would make people “worried about getting vaccinated” even more reluctant.

Many scientists expect Covid-19 to stick around even after most Americans are vaccinated, like the flu. Vaccine injury lawyers expect Covid-19 shots to be added to the table eventually because they could be recommended for routine administration in children.

Companies are already testing booster shots to battle SARS-CoV-2 mutations and are testing shots in kids 12 and up. Results for booster shot trials will take a few months.

Results for vaccine efficacy trials in kids will take even longer and won’t be finished in time for the beginning of the next school year, according to Anthony Fauci, director of the U.S. National Institute of Allergy and Infectious Diseases.

“We think it’s highly likely the Covid-19 vaccine will get put on the table. It’s a matter of how long it takes,” Gentry said.

Vaccine injury lawyers are preparing for an onslaught of new cases should that happen.

“It’d be nice to think that that’s not going to be the case. But it’s a nasty, weird virus, so we have to plan for it. We’d be foolhardy not to,” Maglio said.