Covid-19 vaccine recipients who suffer a rare injury will have a tough time getting compensated, as their only option right now is a little-known government program that critics say is opaque and offers payouts to just a handful of those who apply.

About 20 people have filed Covid-19 vaccine-related petitions with the HHS’s Countermeasures Injury Compensation Program (CICP) between January 2020 and Feb. 16, 2021, according to a Freedom of Information Act document obtained by Bloomberg Law. Roughly 58 million vaccine doses were administered in the U.S. within that timeline, starting in mid-December. 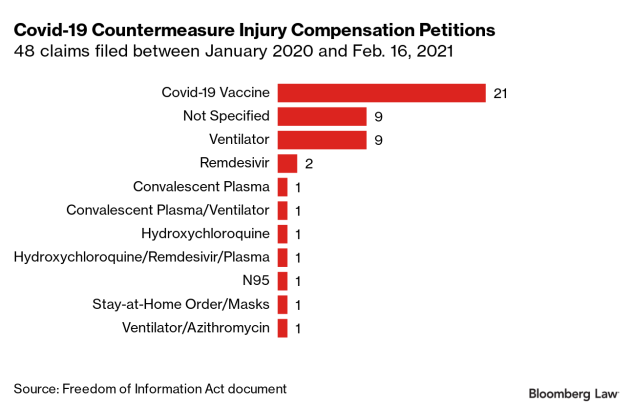 Attorneys expect that for those who have filed petitions, payouts will be few and far between. In a nearly 10-year period, less than 40 of 446 claims filed for injuries from vaccines used in other emergencies, like H1N1 and smallpox, were eligible for compensation, according to data revealed through a separate FOIA request. Federal data show 5% of filed claims have been compensated as of March 1.

“It’s like a black hole,” said Peter Meyers, former director of George Washington University Law School’s vaccine injury litigation clinic, who filed the FOIA requests. When people submit a petition, there’s no way to know what happens to it, he said.

A filing system veiled in secrecy and no guarantee of legal representation, a hearing, or a publicly available final decision are among the shortcomings cited by program critics. Access to those decisions could be especially helpful now to learn more about the safety of Covid-19 vaccines, critics say.

An HHS spokesman said that by law, the CICP resolves injury claims through an administrative process.

Vaccine injuries are rare—roughly one out of every 500,000 doses distributed in the U.S. has an injury petition. The few people who are harmed by vaccines can seek damages from the Department of Health and Human Services via one of two programs—the CICP and the Vaccine Injury Compensation Program (VICP). The FOIA data is only for the CICP.

Covid-19 shots aren’t covered by the VICP because the program is intended mostly for childrens’ vaccines, leaving the less generous and more arduous CICP as peoples’ only option for any harm caused by a Covid jab. The average payout under the VICP, around $533,000, is more than twice the amount of what the CICP typically offers, at a little over $200,000, according to the HHS.

Covid shots could be added to the list of VICP-eligible vaccines in the future, particularly once they’re approved for use in people under the age of 16.

Some law professors argue the CICP ultimately fails people who’ve stepped up to do their duty for the collective good by getting inoculated.

“If we’re going to ask the soldiers to enter the battlefield of public health—which we need people to put shots in arms to create the herd immunity that is so necessary for our collective well-being—we need to make sure when those soldiers are downed on the battlefield, they are cared for, “ said Nora Freeman Engstrom, a professor at Stanford Law School who researches vaccine injury compensation programs.

Common side effects of Covid-19 vaccines include muscle pain, fatigue, or chills, but they are typically short-lived. Those problems wouldn’t be covered under either compensation system because they only last a few days. Only pain or limited mobility that goes on for months is considered eligible for payment under both programs.

The HHS posts some broad data on its website about the CICP program and says it’s working to include more information. But the agency is prohibited from disclosing claims and the ensuing decisions that “include the submission and documentation of medical information and other Personally Identifiable Information,” the spokesman said.

Digging Into the Numbers

The HHS established the CICP in 2010 to pay out damages for individuals injured in sudden health crises like Ebola and the Anthrax scare.

The CICP has received 551 claims since it began for peoples’ alleged injuries from “countermeasures"—vaccines, medications, and medical devices. Twenty-nine of those claims were compensated for an average of over $207,000 each, according to federal data. Sixty-two cases are in review.

Forty-eight Covid-related claims were brought to the agency between January 2020 and Feb. 16 of this year, according to the FOIA document. Less than half of those (21) were for an injury sustained through a vaccine. The others were for masks, treatments, or “unspecified” Covid-19 countermeasures.

Those numbers are lower than filings for other outbreaks that were more contained. According to the HHS, nearly 38 claims were filed from October though December in 2009 for the H1N1 vaccine, which was distributed that fall.

Attorneys say it’s difficult to draw conclusions with such low numbers all around. On the one hand, Meyers says the filing numbers are a good sign that the Covid-19 vaccines are safe. But the low number of claims relative to doses administered also could be because the program isn’t well known or there could be a lag for other reasons, he said.

The VICP covers more routine vaccines—like seasonal flu or the measles. It guarantees legal representation and a hearing for claimants, unlike the CICP.

Because the CICP doesn’t offer a lawyer, sometimes claimants are left to their own devices. The HHS doesn’t have data on the number of claims submitted by an attorney, but Meyers believes the nine claims for “unspecified” Covid-19 countermeasures were probably filed by laymen rather than lawyers. As he sees it, a seasoned lawyer would file paperwork that identifies the vaccine, medicine, or device from which the person is alleging harm.

Having the financial resources to hire a lawyer or the wherewithal to navigate a government filing system may offer vaccine recipients a better chance at winning compensation.

“This is just further exacerbation of all these inequalities which we see otherwise in the Covid crisis,” Meyers said. The pandemic has showcased health disparities throughout the U.S. Black and Latino communities are more likely to get sick and die from Covid-19 than White Americans, but they’re also less likely to be vaccinated.

The Biden administration may be missing an opportunity for researchers to learn about the worst side effects of of new Covid-19 vaccines. Decisions made by VICP officials are posted publicly, but that’s not the case with CICP cases.

“Agency officials decide the claims in secret, without the opportunity for injured individuals or their families to speak with or interact with decision makers,” Engstrom said.

All CICP decisions are unpublished, so “the public and researchers can’t know which adverse events were found with vaccines and which were not,” she said. “This has the potential to stunt our understanding of these vaccines’ safety and efficacy.”