Lawyers and voters behind a push to label Rep. (R-N.C.) an insurrectionist, and therefore ineligible to run for re-election under the 14th Amendment to the Constitution, can’t intervene in his federal lawsuit seeking to have the effort ruled unconstitutional, a judge ruled.

U.S. District Court Judge Richard E. Myers on Monday gave Cawthorn two procedural victories in his quest to block the North Carolina State Board of Elections from investigating the voters’ complaint that Cawthorn “engaged in insurrection or rebellion.”

He ruled that involving the voters who filed the challenge would only slow down a case that has been fast tracked and may end as early as next week, and combined Cawthorn’s motion for a temporary injunction with his underlying lawsuit, effectively limiting discovery and introduction of records that the election board sought to present in court.

Myers scheduled a hearing on all issues for February 28.

“The court concludes that it may resolve the motion for injunctive relief on the legal issues before it; thus, the motion to consolidate is granted,” the judge ruled.

The larger question of whether state election officials can use the 14th Amendment to keep sitting members of Congress from seeking re-election remains, and may ultimately be decided by the Supreme Court.

The challenge has captured national attention for its novel constitutional argument and its connection to characters, rhetoric and issues that have divided the country. If Cawthorn is kicked off the North Carolina ballot it will become a political tool to challenge the candidacies of other officials accused of supporting the Jan. 6 rioters, constitutional scholars and election attorneys say, and even to make former President Donald Trump ineligible to run for president in 2024 in North Carolina and perhaps other states — a stated goal of the lawyers behind the push.

Lawyers seeking to disqualify Cawthorn and other candidates nationwide face many obstacles, legal scholars said. Last week an election board in Indiana rejected a similar attempt by voters to disqualify Rep. Jim Banks from running for reelection. 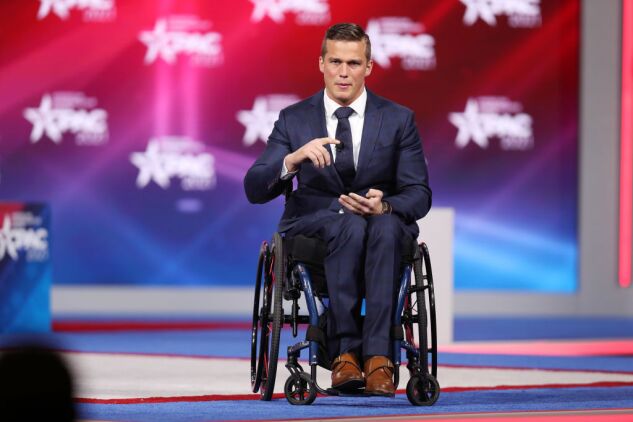 If Myers ultimately rules against Cawthorn, the election board, made up of three Democrats and two Republicans, would be able to subpoena his phone records, emails and other correspondence seeking to determine if he coordinated with the White House, Trump or planners of the assault.

“They certainly have the right to depose him,” Harvard Law Professor Laurence Tribe, who supports the action in North Carolina, said in an interview before the ruling. He called Cawthorn’s rhetoric, including his speech during a Jan. 6 rally, “the very definition of an insurrection.”

Cawthorn is a strong supporter of Trump, who returned the favor with a videotaped endorsement two months after the Capitol riots.

“He has my endorsement, he has my complete and total, as I like to say, endorsement,” Trump said. “And he’s a very special guy and let’s back him all the way, whatever he wants to do.”

Michael T. Morley, the Sheila M. McDevitt Professor of Law at Florida State University, said that while similar challenges may sprout up elsewhere, they are likely to fail. State election boards are designed to handle qualification disputes on issues such as residency or whether candidates are old enough for office - not to wade into Constitutional decisions that reside with Congress.

“This isn’t the sort of filing that election officials have a lot of experience dealing with,” Morley said. While he didn’t know of any cases directly on point, “if you look more broadly at Supreme Court rulings on qualifications, there is a serious argument that they lack the power to exclude (Cawthorn).

“I think at the end of the day, even if the board were to try to exclude him, the federal courts would say it’s up to Congress to determine a candidate’s qualifications,” Morley said.

Under North Carolina law, any voter can file a challenge with the state elections board if they have a “reasonable suspicion” that the candidate doesn’t meet qualifications to hold office. Once a challenge is filed, the candidate has the burden to prove they aren’t guilty of any accusations.

That means Cawthorn must answer the complaint, actively defend himself to the elections board and comply with their subpoenas.

Cawthorn’s lawyer, James Bopp, Jr., said in a motion that the entire process is unconstitutional.

“The Challenge Statute’s burden shifting provision violates the Due Process Clause of the Fourteenth Amendment by requiring Rep. Cawthorn prove a negative (i.e., that he did not engage in insurrection),” Bopp wrote. “The power in the Challenge Statute reaches far beyond the State’s authority to regulate its elections, conduct counts and recounts of votes, and other administrative functions allowed by our system of federalism.”

Whatever decision the state elections board reaches, the final say will likely come from the U.S. Supreme Court or Congress, which has the power to reject any House candidate after a federal election but before they are sworn into office.

Edward B. Foley, the Ebersold Chair in Constitutional Law and Director of Election Law at Ohio State, said he believes the bid against Cawthorn will ultimately fail.

The bigger question of who is an insurrectionist, and who should be disqualified from office, will only become more tangled if Congress doesn’t set clear standards, Foley said. To start, he said, Congress should direct the Department of Justice to file a civil suit asking the courts to determine whether Trump or any other officials connected to the Jan. 6 assault are disqualified from holding office.

“That seems to me to be the single issue that shouldn’t be decided on a local level, either by the board of elections or a local judge,” Foley said. “We need a national answer . . . a legal definition of Article 3.”

Tribe, the Harvard professor, agreed and said the challenge filed against Cawthorn is a start.

“People who think that the 14th amendment automatically enforces itself are just dreaming,” Tribe said. “You have to have a determination that this was an insurrection and I’ve always thought that the way to get this adjudicated is through this kind of action.”

To contact the reporter on this story: at jholland1@bloombergindustry.com

To contact the editors responsible for this story: at bkohn@bloomberglaw.com; at hrothman@bgov.com