Drug companies like GlaxoSmithKline Plc and Gilead are banking on cutting-edge cancer treatments known as CAR-T, but manufacturing bottlenecks are holding back the market.

Since Novartis broke open the market in 2017 with Kymriah, followed a few months later by Gilead Science’s Yescarta, scientific development of CAR-T therapies is booming and unlikely to slow down.

But the breakthrough success of of CAR-T, which essentially trains immune system cells to kill off cancer cells, is so new that manufacturing systems still need to catch up. The speed of the initial laboratory successes creates challenges in scaling up therapies as they move to commercialization. 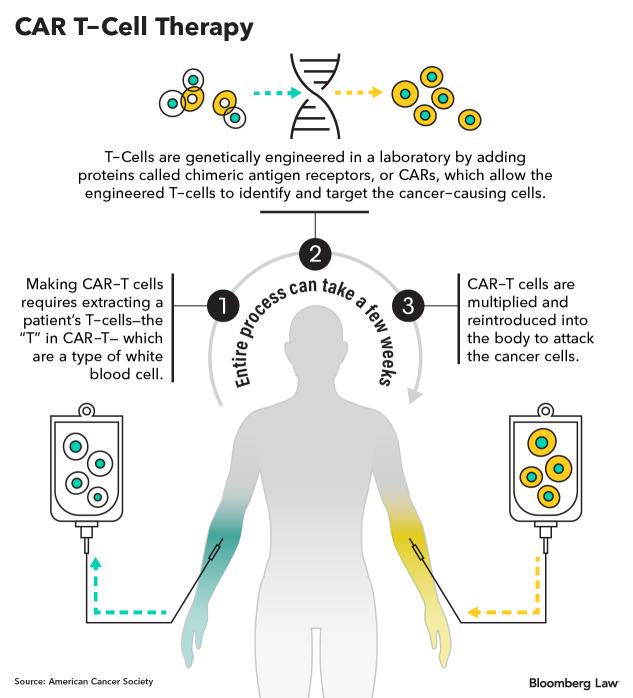 Nearly 700 CAR-T studies pop up in the database ClinicalTrials.gov, including 152 industry-sponsored trials that are active, recruiting or enrolling by invitation. The 21st Century Cures law (Pub. L. 114-255) further put more than $3 billion in an NIH special fund to advance personalized treatments and cancer therapies, both of which will likely benefit CAR-Ts down the line.

Market research firm Coherent Market Insights predicts the CAR-T market will grow to $8 billion worldwide by 2028 from $168 million in 2018. The pharma industry is already preparing. GSK announced Feb. 5 it’s spending $4.2 billion to access a promising treatment from Germany’s Merck KGaA in immune-oncology—an area of research that includes CAR-T and area of research that aims to help a cancer patient’s immune system fight the disease. Gilead named partnerships to discover, develop and commercialize immuno-oncology treatments, according to its earning announcement Feb. 4.

But mass production is a problem. “I do think it’s a barrier,” Nirali N. Shah, a leukemia researcher who specializes in CAR-T clinical trials told Bloomberg Law. “Right now, we’re probably not at the capability of being able to produce as many products as we want to.”

CAR-T is one of several approaches to immunotherapy, which helps the immune system fight cancer, infection and other diseases. It’s advanced the furthest in clinical development, according to the National Cancer Institute, part of the National Institutes of Health.

Good science “is really going to be moving forward the potential of CAR-T cell therapy,” said Shah, who serves as the clinical head of the NCI’s pediatric hematologic malignancies section. That means the manufacturing side “is going to have to come up with even more innovative strategies to keep up with all of the promise that’s there.”

Catherine Bollard, director of the Center for Cancer and Immunology in the Children’s National Health System, said academics, industry participants, and medical product regulators are trying to catch up with the technology and determine the best standards for developing these products. “It’s a really exciting and positive time for our field, but it’s a big learning curve as well,” she told Bloomberg Law.

Creating personalized CAR-T treatments for patients whose bodies have likely been put through chemotherapy already is a complex, labor-intensive process, both Bollard and Shah noted.

Making these cells requires extracting a patient’s T-cells, a type of white blood cell. They are then genetically engineered in a laboratory to produce proteins that allow the engineered T-cells to identify and target the cancer-causing cells. These new cells are then multiplied and reintroduced into the body to kill off the cancer cells. The entire process can take a few weeks.

“This is not a drug,” Bollard said. “This is a living biologic, and it comes from the patient and individuals. There’s so much variability.”

All CAR-T therapies are made in a slightly differently way. Each engineered cell has to be tailored to a specific antigen, a substance that causes the immune system to make antibodies, because different cancers have different antigens.

“We’re asking a lot,” said Robert A. Preti, general manager of cell therapy manufacturer Hitachi Chemical Regenerative Medicine Business Sector. “We’re turning over the responsibility for the mechanism of action to the cell.”

Any change in the manufacturing process of the cells runs the risk of changing the final product. “We can’t fully explain whether we’ve made that change or not because we don’t fully understand how the cell is doing what it’s doing. And that’s created a bit of a challenge for us,” Preti said.

Bottleneck Should Clear Up

Both Shah and Preti expressed optimism these challenges will be resolved. “It probably is a bottleneck right now, but I’m hoping in a couple years we won’t see as much of it as we do right now,” Shah said.

The FDA predicts it will be approving 10 to 20 gene therapy products a year by 2025.

If manufacturers had CAR-T platforms that could be modified to accommodate all the different products that are coming out today, it could help bridge some of the current manufacturing gaps, Preti said.

“I liken it to grandma’s cookie recipe,” Preti said. “Every grandma has a cookie recipe.” They’re all using the same types of equipment, but each one has her own baking methods.

“There’s a commonality into how to make those cookies,” he said.

Preti added that Hitachi is working on developing a manufacturing platform that could reduce the complexity of the current system and make CAR-T manufacturing easier to scale. “That will be sustainable at a very high quality. And the cost of goods will come down at the same time because you’ll be able to scale.”

There’s also been movement for CAR-T developers to use the same device, which Shah said could help make the manufacturing process more efficient.

“Right now, what’s happening is if somebody wants to [create a therapy] targeting a new antigen, they start from scratch,” Shah said. But it’s possible that some parts of the process can be automated. “Automation might be a component to T-cell technology and being able to move things around more efficiently.”

Several companies are looking for CAR-T strategies that are more “off the shelf,” Bollard said. “One way of doing it is by generating banks of different types of cell therapies from healthy donors that you can then give the patient, depending on their disease and depending on their tissue type.”

The Food and Drug Administration is working on new guidance to address these manufacturing challenges.

Preti said the agency could be most helpful in explaining its expectations for the different phases of product development, Preti said.

For example, what level of grade for materials will the agency allow during a Phase I clinical trial, when researchers first expose an experimental therapy to humans, compared to what’s acceptable at the commercial level?

During Phase I, developers often can’t create at a commercial-grade level the substances used to carry out laboratory tests, known as reagents, because that work is coming directly from a research lab, Preti said. “What do we need to do exactly, and how do we help our customers who are coming to us using a reagent?”

“Novartis took a cutting-edge, personalized treatment approach from the clinic and created an entire CAR-T delivery eco-system,” Althoff said. “We are continually learning and making improvements to our process to manufacture and supply Kymriah and ensure that the children and adults who can benefit from it have access to this therapy.”

To contact the editors responsible for this story: at csaenz@bloombergtax.com; at fjohnson@bloomberglaw.com